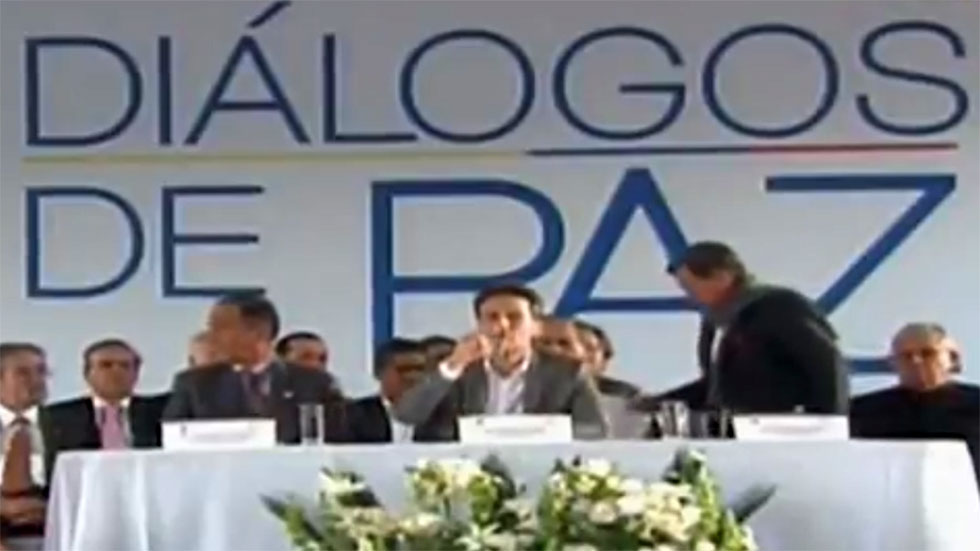 The official opening ceremony of the dialogue took take place at a mansion in the town of Cashapamba after more than three years of, often agitated, informal negotiations.

The ceremony was not attended by President Juan Manuel Santos or ELN leader “Gabino,” but by the delegations that will be holding the negotiations.

Government lead negotiator Juan Camilo Restrepo told those attending the ceremony that after more than 50 years of war and two peace accords in little more than 10 years Colombia had become “a laboratory for peace.”

“In Colombia today, we are trying to develop a political approach to conflict. The Government of [President} Juan Manuel Santos invited us to talk and we came here with the will to find a political way out” of the armed conflict the ELN began in 1964, said chief negotiator for the ELN, “Pablo Beltran.”

Both sides have acknowledged the necessity to progress quickly with the talks as the current Santos administration have just 18 months in office with the 2018 presidential elections likely to be a heavy distraction.

Senator Roy Barrera said that indeed the talks must be concluded in 2017, so that a “complete peace” can be achieved in the South American country before elections are held in 2018, reported Venezuelan state television network Telesur.

“We have instructions from the President of the Republic … to ‘get his foot on the accelerator and work as a team to carry out these dialogue’,'” added the Congressman.

After secret approaches since January 2014, the government and the ELN announced about 10 months ago that they were ready to start formal peace negotiations.

The installation of the table was scheduled for October, but was delayed by Santos’ demand that former communist Odin Sanchez, a rebel hostage, be freed first since April.

This finally came to fruition on February 2, along with the pardon of two imprisoned guerrillas, Nixon Cobos and Leivis Valero.

The release of the Odin Sanchez in particular was a major breakthrough as the issue of kidnapping had been a major stumbling block in the preliminary talks and the main reason why the scheduled negotiations suffered an embarrassing false start in October.

The process as a whole will be overseen by “guarantor” countries Chile, Cuba, Norway and Venezuela.

The ELN, or National Liberation Army — a leftist guerrilla group inspired by the Cuban Revolution — has an estimated 1,500 fighters.

The government is currently implementing a historic peace deal signed last November with FARC, or Revolutionary Armed Forces of Colombia, a Marxist rebel group whose fighters are in a six-month demobilization and disarmament process.

Right wing paramilitary forces of the AUC formally demobilized between 2003 and 2006 without much public discontent.

But experts warn the ELN will likely be a tougher negotiating partner, particularly with next year’s elections looming.