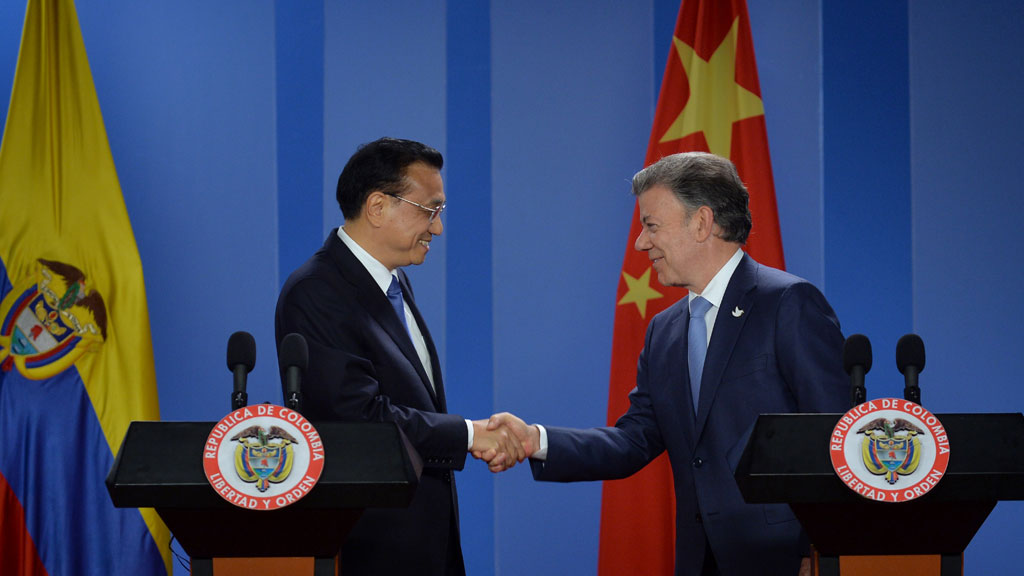 China’s prime minister made his first visit to Colombia on Thursday to strengthen existing trade relationships between the two countries.

The aim of the visit is to further strengthen the countries’ trade relationship. Among others, they discussed the expansion of Colombian exports to China, a Chinese bid to construct Bogota’s first metro, and the possibility of a railroad connecting Colombia’s Pacific west to its Atlantic east coast or even the west of Venezuela.

In an interview with El Tiempo, Keqiang emphasizes the importance of such trade developments.

“I am worried because if Colombia merely exports raw materials, this situation will not maintain itself much longer,” says Keqiang.

Colombia’s oil reserves are calculated to run out within seven years.

The Chinese PM added that “Colombia could sell much more to China, because our market is very big … We are interested in the agricultural items such as coffee, and meat. Also, dairy and fruit, perhaps fruit pulp.”

Keqiang said he had proposed to discuss this further in the Colombia-China Chamber of Commerce.

A cry for diversification in Colombia’s exports

Keqiang is not the only one who thinks that Colombia’s export should include more developed products.

Enrique Posada, director of the Confucius Institute at the University Jorge Tadeo Lozano, as well as Enrique Garcia, CEO of the Development Bank of Latin America, both worry that Colombia’s export is too focused on raw materials.

An example is how the decrease of oil prices in recent months led to Colombia’s export to China to drop by 74.2 percent for the first quarter of this year. An enormous setback compared to that same period last year.

“There is a lack of knowledge of the Chinese market … one needs to offer what they need, and not just that what Colombia has in surplus”, warns Posada in a recent interview with El Tiempo.

Posada emphasizes the need for a serious investigation into the consumption needs of the emerging middle class in China. “Until we do not have that defined, a sharp smell and ear for what the middle class of China consumes… we are blind,” Posada points out.

Keqiang’s current visit will most likely also touch upon the construction of a 220 km railway, which will connect the Pacific coast to the Atlantic coast, or even Venezuela, the so-called ‘canal seco’. The idea was primarily discussed in 2011, and is yet to be refined.

During the last decade, the diplomatic relationship between Colombia and China has shown a clear upward trend and strengthening of trade. At this point the Asian giant has established itself as the second trade partner to Colombia after the United States.

Keqiang also visited Chile, Peru, and Brazil during his trip to South-America with the same similar objective; to strengthen China’s diplomatic and economic relationships in the hemisphere.

Moreover, alongside the planned “dry canal” connecting Venezuela to Colombia’s Pacific coast, China is analyzing the possibility of another canal in Nicaragua – an alternative to the Panama canal.

Whereas the US is having a difficult time maintaining the support of its neighbors in the south, China’s presence in the western hemisphere is rapidly increasing.