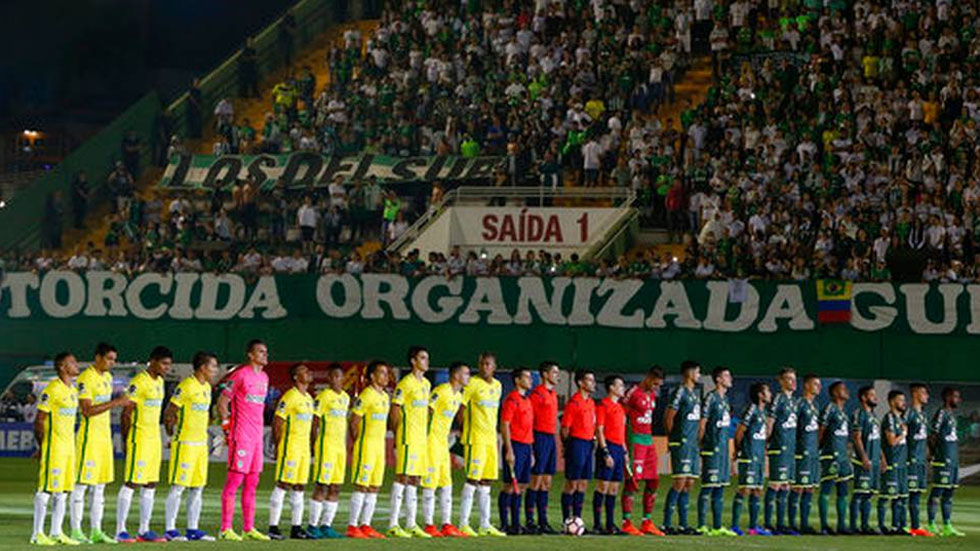 Chapecoense struck first in Tuesday’s opening leg of the Recopa Sudamericana final when Reinaldo converted from the penalty spot in the 23rd minute.

Nacional equalized when Macnelly Torres scored just under the hour before Luiz Otavio scored the winner in the 73rd minute, although the final result seemed almost not to matter as both teams and their supporters paid a series of moving tributes to the scores of people that died in last year’s plane crash in Colombia.

The Recopa Sudamericana is one of South America’s most prestigious football titles, contested between the winners of the Copa Libertadores and the Copa Sudamericana champions, but this year’s final has taken on added poignancy.

Atletico Nacional won the 2016 Copa Libertadores and were supposed to play Chapecoense for the Copa Sudamericana title, but the match never took place after the charter plane flying the Chapecoense team to Medellin in Colombia crashed, killing 71 out of the 77 people on board, including 19 players.

As a mark of respect, Nacional asked that Chapecoense be awarded the championship, setting up an emotional rematch in the two-legged Recopa Sudamericana.

Chapeco, a city of 200,000 residents in Southern Brazil close to the Argentine border, prepared a series of tributes both inside and outside the 22,000 seater Arena Conda, where the funerals of 50 people took place just four months ago.

Inside the packed stadium, the mayors of Chapeco and Medellin embraced each other in what organizers called “a show of gratitude” to the Colombian visitors.

The Chapeco mayor Luciano Buligon, wearing a Nacional jersey and fighting back tears, told the crowd: “Chapecoense and Atletico Nacional will be brothers forever.”

Federico Gutierrez, the mayor of Medellin, was also highly emotional when he spoke. “Chapeco is now my home. Brazil is my home. Fraternity was born out of all this great tragedy,” he said.

After 71 minutes, the crowd at the Arena Conda lit up their phones and sang “Vamos, Vamos Chape” (Let’s go Chape), a tribute they started at matches since the accident.

Goalkeeper Jakson Follmann, who lost a part of his right leg in the crash, was too emotional to finish his speech. “I want a round of applause to all those that passed. If it weren’t for them, we wouldn’t be here,” he said.

The crowd sang a melody to thank the Colombians for their response to the tragedy, including the rescue and medical teams that worked at the crash site.

“If someone already gave you their hand and didn’t ask for anything in exchange, take notice, this is a special day,” the lyrics went.

Former international player and coach Zico, and current Brazilian manager Tite, were among some famous Brazilians who paid tributes in videos shown on giant screens in the stadium. There was also a tribute to the victims of the recent landslide in Mocoa, Colombia.

The second leg of the Recopa Sudamericana will be held on May 10 at the Atanasio Girardot stadium in Medellin.