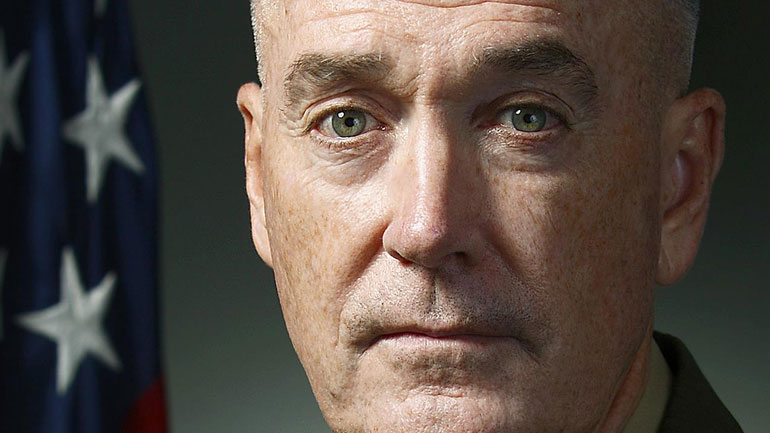 The Chairman of the US Joint Chiefs of Staff has pledged continued strong US military support for Colombia, saying that massive security challenges will follow a peace treaty with the FARC.

While a treaty with the FARC will change the nature of the peace-building process, much military work will remain to be done, said Marine Corps General Joseph F. Dunford Jr., the top officer in the US military establishment, according to a US Defense Department statement.

“They are not signing an accord and [then] there is peace. They are not entering immediately into a post-conflict environment,” said Dunford during a visit to Bogota late last week. “They see the challenges for the Colombian military being enduring challenges.”

Dunford was not specific about the kind of post-treaty challenges he foresees nor the specific military assistance the US will offer. However, US Pres. Barack Obama’s Peace Colombia proposal to Congress would boost funding for what it calls “Military Financing” by 54%, from $25.0 million to $38.5 million. Another $46.0 million would go towards military training and Department of Defense Counternarcotics assistance.

The two countries have a long-standing strong military alliance, which has seen the US provide more than $7 billion in security aid since 2000.

In addition to its direct aid to Colombia’s military, the US relies on Colombian troops stationed in Central America “to combat malign influences,” as the Defense Department statement termed it.

Colombian military personnel also participate in United Nations peacekeeping operations, such as the Sinai region of the Middle East. The country has committed to training 5,000 troops for international peacekeeping.

“Colombia is not only important regionally, but they are important as a global exporter of security as well,” Dunford said.

“What did we learn” from the last fifteen years of military aid to Colombia, Dunford asked rhetorically. “No. 1 is we learned endurance, persistence and clear vision over time in building partner capacity, works,” he answered.

He made no reference to any of the many human rights violations that have accompanied Colombia’s military operations against the FARC.

Dunford said the US was at first skeptical about Colombia’s ability to use billions of dollars in military aid. For example, Colombia sought large shipments of Black Hawk helicopters, but many in Washington doubted the country’s ability to use them.

Colombia rose to the challenge, said Dunford. The US provided more than 100 Black Hawks, and Colombia now has the world’s largest inventory outside the US.

In related news, at the same time Dunford was in Bogota the Colombian army’s top maintenance officer and five assistants were in Columbia, South Carolina for a week-long visit with the South Carolina Army National Guard. The visit by Brig. Gen. Alexander Ramirez was an example of the kind of training in the US provided for Colombian military personnel.

The partnership between the National Guard unit and the Colombian army is four years old. The two organizations had 26 “engagements” last year, with more expected this year, according to a South Carolina National Guard statement.

South Carolina Congressman Jeff Duncan, a Republican, is influential in Latin American foreign policy. Within the House Committee on Foreign Affairs, Duncan chairs the Subcommittee on the Western Hemisphere.