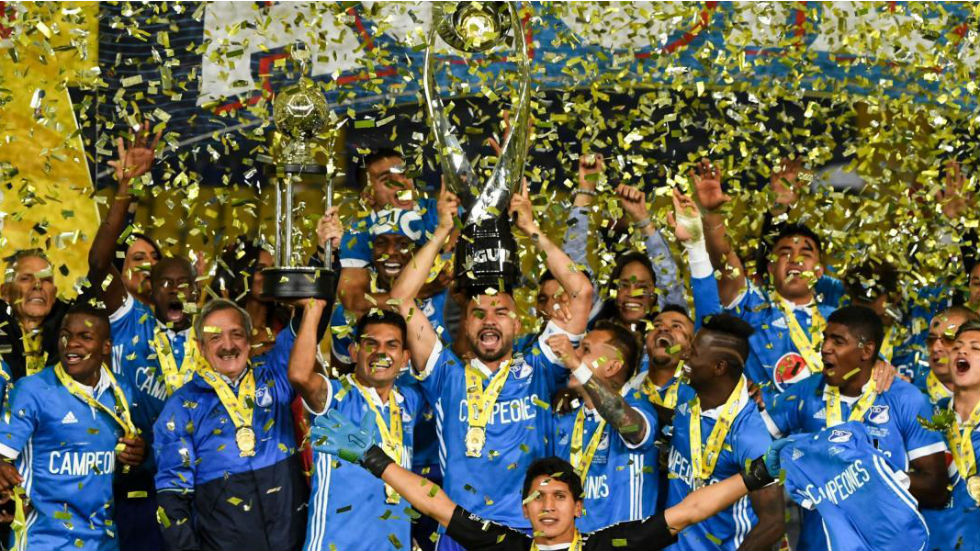 Colombia’s Millonarios secured a 15th league title on Sunday with a victory over Bogota rivals Santa Fe at the “El Campin” stadium in the country’s capital.

A stunning strike from substitute Henry Rojas five minutes from time was enough to secure a 2-2 draw on the night and a 3-2 aggregate win for Millonarios’ first title triumph since 2012.

Millonarios coach Miguel Angel Russo reflected that to win the title came as something of a relief to the players and fans who watched their city rivals, with whom they share a stadium, land both league and continental titles in recent years.

This is a relief for the people of Millonarios, and for the players who had never been champions. I always told them that there is always a first time and today was it.”

Back at the top table

Victory for Millonarios means brings an end to a somewhat barren period for one of the powerhouses of Colombian soccer after five years without a title and crucially moves them within one championship of bitter Medellin rivals Atletico Nacional.

The club, which was formerly founded in 1946 attracts one of the biggest fan bases in Colombia and a15th league title now puts it back in contention to compete for number one spot on the roll of honor.

“Millos” enjoyed its most successful period in the 1950’s after a players strike in Argentinean league in 1948 saw an influx of Argentine players in Colombia including the legendary Alfredo Di Stefano who lined out for the Bogota giants before moving to Real Madrid.

The squad became known as the “Blue Ballet” and despite the eventual loss of all the foreign players following a FIFA ruling in 1951, “Millos” secured eight titles over a 12-year period in the 1950’s and 1960’s.

The capital-based club won titles again in 1972 and 1978 but became embroiled in controversy in the 1980s when back-to-back league victories in 1987 and 1988 were overshadowed by the links to drug trafficking when Gonzalo Rodriguez Gacha, “the Mexican,” owned the team.

In 2012, the club spoke publicly about the possibility of relinquishing the titles that were tainted by the presence of drug money but the process was never initiated.

Two years previously, the club declared bankruptcy and was taken over by a consortium of fans known as “Azul & Blanco”, which led to an upturn in fotunes both on and off the field.

In 2012, under the stewardship of Hernan Torres, Millonarios secured a 14th title after a turbulent period without a championship win in two decades.

Sunday’s triumph puts “Millos” back at the top table of Colombian soccer also enabling them to qualify for participation in South America’s most prestigious club competition, the Copa Libertadores in 2018.