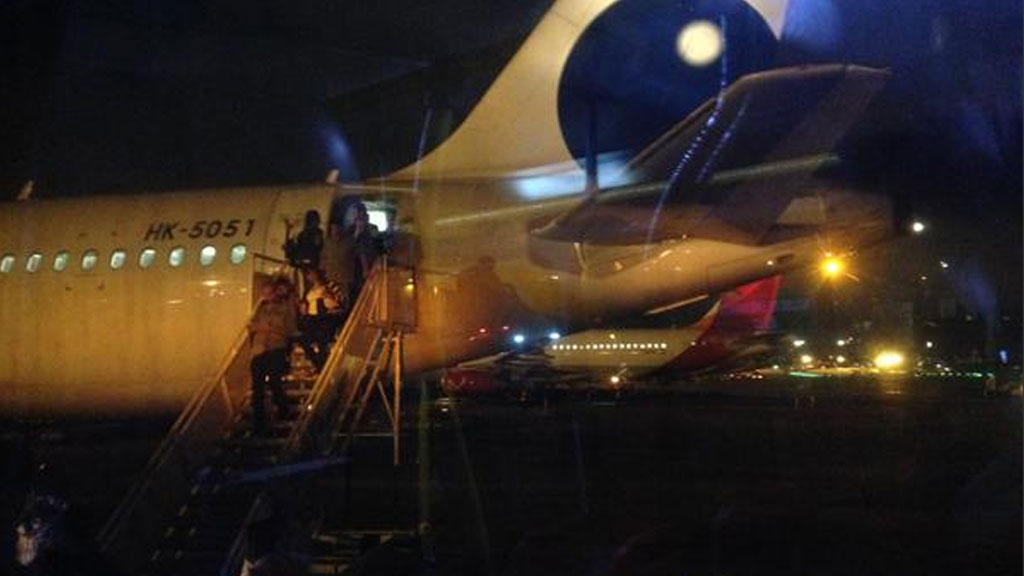 Bogota-Medellin flight emergency; ‘I thought of the lost planes in Asia’

A full VivaColombia flight headed from Bogota to Medellin on Wednesday night suffered a frightening emergency when the aircraft’s turbine exploded, causing many to fear for their lives.

“Pilots are trained every 6 months for this type of situation…and all of the Viva Colombia team complied with the airline’s safety protocol,” VivaColombia said in a statement on the company Twitter page just a few hours after the incident on Wednesday night.

When the Airbus A320 took-off from Bogota to the Rio Negro area of Medellin at 6:58 pm on Wednesday, the flight itinerary was on time and the conditions were favorable for a smooth takeoff.

Passengers were unaware that they would soon be confronted with a horrific and alarming situation.

Air traffic controllers gave the green light to the pilot for takeoff, but when it did so an explosion on the right side of the aircraft and a tremendous flash frightened and bewildered passengers.

“A light of fire was seen and  I thought the plane would crash. People were stunned, frightened. We asked the hostess what was wrong, but she was more scared,”  recalled one of the passengers, Sebastian Jimenez, to Colombian daily El Tiempo.

Those located on the right side allegedly claimed that a turbine had exploded, with fire emanating brightly and suddenly. The reaction of the passengers was to look in all directions, listen to what the crew had to say and to be alert to any movement of the aircraft, Jimenez said of the subsequent “tense” moments.

“I thought of the lost planes in Asia,” said Jimenez.

“There were children crying, people did not know what to do. At first, the pilot spoke and said it could have been a tire that exploded, but then they later said it was a turbine, ” furthered the passenger.

Not knowing what would happen and in the midst of trouble, passengers witnessed the aircraft veer to the right while flying slowly and low.

“I felt that the plane lost power. He did not have the same power,” Jimenez described.

Despite the anxiety, there was no collective despair and passengers united by taking each other’s hands to pray for safety. After making a full loop, the plane eventually landed smoothly and to the safety of waiting fire trucks and emergency care.

Minutes later, according to Viva Colombia’s statement, it was determined that it was a failure of the right engine of the aircraft.

“Thanks to the pilot of VivaColombia, I’m writing this,” Jimenez tweeted in gratitude of the company’s reaction.