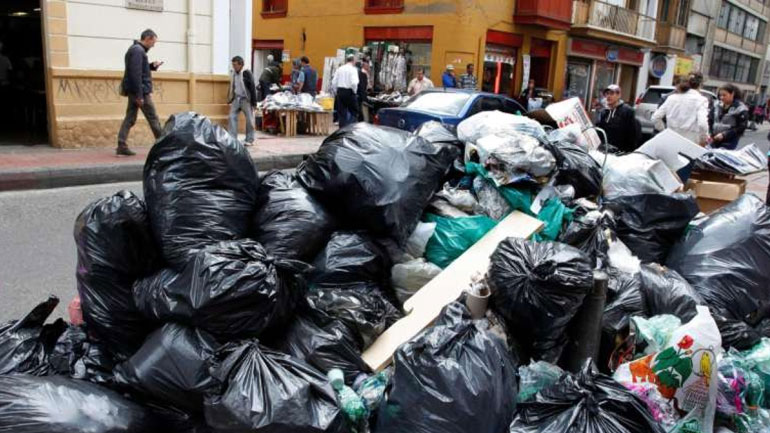 Another trash crisis in Bogota?

Inhabitants of seven districts of the country’s capital city of Bogota on Wednesday awoke to nearly 1,000 tons of waste that had not been collected in the city’s latest garbage collection catastrophe.

Heavy rainfall, leading to bad road conditions, have prevented four companies from accessing the city’s landfill site of Doña Juana. As such, the districts of Suba, Usaquen, Fontibon, Ciudad Bolivar, Martires, Barrios Unidos and Chapinero were told to expect delays of over six hours in the collection schedule.

Coordinator of one of the affected companies, Aguas de Bogota, Diego Perez explained “The rainy season has affected the entrance to the fill, the restoration could take between 24 and 36 hours”.

A worker from the company furthermore reported that “the roads to the unloading platform at the landfill during rainy season right now are like a quagmire because they have not wanted to fix them, then the trucks are left there and cannot move,” anticipating the likelihood of “a major accident”.

Workers and citizens have claimed this is not the first time the waste has been left flooding the streets and have reportedly filed complaints. It was reported on Wednesday that there were 130 garbage collectors waiting to deposit waste in the landfill. Authorities at UAESP have furthermore claimed that operators at the landfill reported issues to be fixed last week, with long lines of trucks attempting to enter the site.

The District has however denied that there is any emergency. Bogota’s Mayor Gustavo Pedro reported on Wednesday “Last night due to rain delays were generated in the unloading of trucks at the landfill. At this time the operation is normal.”

General Secretary Martha Lucia Zamora reported that claims of a crisis similar to that of 2012 when the city was without garbage collection for three days are “not true”.

In late 2012 a botched reform left 9,000 tons of waste in the streets of Bogota and resulted in the temporary dismissal of the mayor last year.