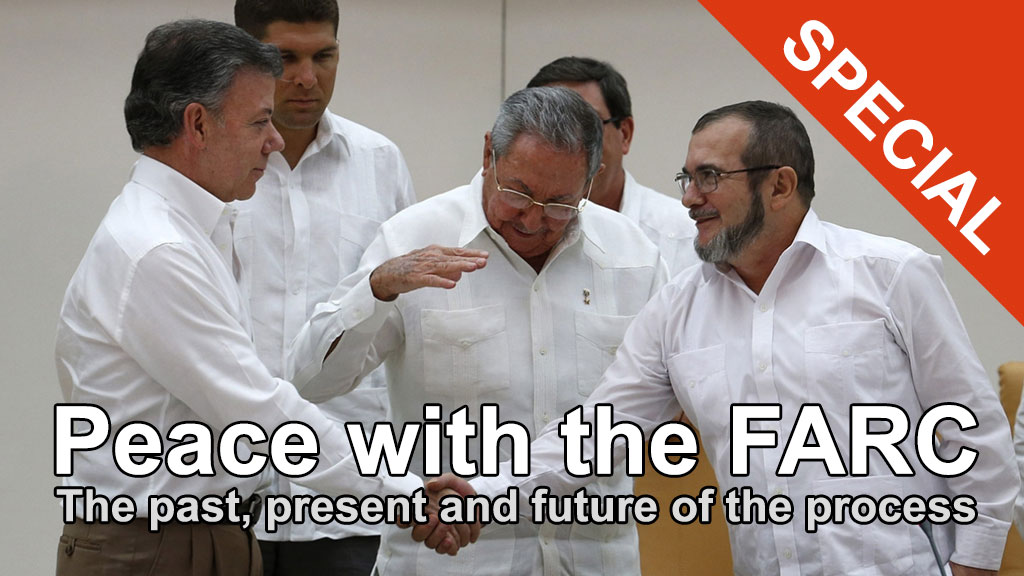 Three years after peace talks between the Colombia’s government and FARC rebels began, many items lie scattered across the negotiations table. Here’s a break-down of the five most significant achievements so far.

The government and FARC delegations have been meeting in Havana, Cuba since November 19, 2012.

While a peace deal has not been achieved to date, the negotiations have resulted in a number of achievements never before reached in the armed conflict that began in 1964.

With the following five achievements, some set to be implemented with a final signing of the talks, Colombia will seek a new path in its history towards reconciliation, reintegration and most importantly of all — peace.

After over half a century of bloodshed in Colombia, resulting in at least 260,000 deaths and another 6.5 million displaced persons, the reduction in violence achieved during the peace talks is one of the most fundamental achievements of the peace talks between the FARC and the government.

Decades of guerrilla warfare have left the Colombian countryside ravaged by poverty and violence, forcing millions to flee their homes in the wake of disputes between the national military, the FARC, other leftist insurgency groups and right-wing paramilitaries.

In efforts to commit to a de-escalation, the FARC have imposed several unilateral ceasefires, the most recent of which was declared on July 20.

This ceasefire called by the FARC and reciprocation by the military has reduced conflicts of violence to levels not seen in 40 years, according to CERAC, an NGO which measures attempts by the government and FARC rebels to de-escalate violence during peace talks.

Although recent victims data represents only a fraction of the hundreds of thousands of victims in previous years, the National Victims Unit still registered 60,000 victims over the course of 2015.

Most recently, President Juan Manuel Santos and FARC leader “Timochenko” announced to instate a definitive bilateral ceasefire by mid-December, just in time for Christmas. However, whether a mutual ceasefire will be successful remains uncertain.

War crimes committed in the conflict

One of the most controversial issues on the agenda, transitional justice, was agreed upon on September 23. The historic deal outlines the conditions of amnesty, the judicial body in charge of prosecuting alleged war criminals, and the terms of jail sentences.

The deal affects both the state and the guerrillas as both are accused of having committed tens of thousands of human rights violations during the conflict.

According to the deal, FARC guerrillas who are not convicted of war crimes will receive amnesty.

All actors in the conflict — military members, guerrillas and civilians alike — who are accused of war crimes will be prosecuted.

If a war criminal is convicted, but has voluntarily confessed his crimes and is willing to compensate his victims, the convict will spend between five to eight years with “limited freedom.” How convicts’ freedom will be limited was not specified, but was said to be made public within weeks.

A convicted war criminal who only reluctantly collaborated with the tribunal will be sentenced to five to eight years in prison.

If a war criminal is convicted and has failed to cooperate, he or she can face a sentence of up to 20 years in prison.

Extreme economic inequality and state abandonment in the countryside are among the root causes of what long-seemed to be a never-ending war in the South American country.

In Colombia, 1% of the population owns around 50% of the land in the country, while scores of poor subsistence farmers known as “campesinos” lack access to the national wider economy, healthcare and education.

Moreover, 14% of the country’s national territory was stolen from its original owners, the vast majority of whom were forcibly displaced in the process.

To improve conditions in the countryside and to return stolen land, the national government and the FARC have agreed to redistribute land property through a land fund where displaced or landless farmers can request farmable plots that would allow them to provide for their families.

The land in this fund should come from recovered properties that were stolen by paramilitaries, state-owned land, and also underused private property.

The government additionally agreed to carry out of a “massive formalization plan” to formalize land titles for families who have worked specific plots for decades, and in some cases, centuries without the necessary property titles.

The government will increase labor inspections to make sure that large agricultural businesses do not engage in modern slavery or otherwise violate the rights of their workers.

Simply put, Colombia’s conflict would not have been as violent without the proliferation of the drug trade.

Drug-trafficking, for which the Andean country is internationally infamous, has served as the single greatest source of financing for all involved parties since the surge of cocaine in the 1970s.

While the issue of coca cultivation spans beyond the conflict, the illegal market has directly funded the military power of nearly all insurgency groups, creating a violent and dirty economy that poses long-lasting problems for Colombia’s conflict resolution.

In the agreement known as the “Problem of Illicit Drugs,” the FARC, which plays a major role in taxing and protecting coca fields across the country’s diverse landscape, has said it would stop its involvement in the drug trade.

For its part, the government has committed itself to developing economic substitutes for illicit crops, by large majority marijuana and cocaine, as additions to the rural reform deal.

The United States has long been involved in Colombia’s “war on drugs,” mainly providing resources in the form of training, weapons and funding for the state. As Colombia is laying out its new plans to fight coca production and cocaine trafficking, Washington agreed not to press for the extradition of FARC traffickers, who will instead be put on trial domestically.

Ending Colombia’s legacy of political exclusion is a critical component to resolving the conflict — which itself evolved out of a broken and corrupt political system ruled for decades by oligarchical dynasties.

The FARC originally mobilized in 1964 in response to a power-sharing agreement between the Liberal and Conservative parties, which created a hegemony that excluded other parties from the political arena.

Throughout the last half-century, the FARC, characterized by Marxist principles, have at various times attempted to enter politics through democratic channels, to no long-lasting avail. In the early 1990s, the guerrilla-affiliated party Patriotic Union saw thousands of its members massacred by paramilitary groups, leading the FARC to again intensify its military campaigns.

Now, in efforts to become relevant in Colombia’s development of democracy, the FARC have raised political participation as a vital part of negotiations for a post-conflict state.

To ensure the secure representation of former guerrillas and other political minorities, the government agreed to allow the FARC to become a political party and to provide the security measures necessary in order to ensure leftist groups’ or other opposition groups’ participation without fear of getting killed.