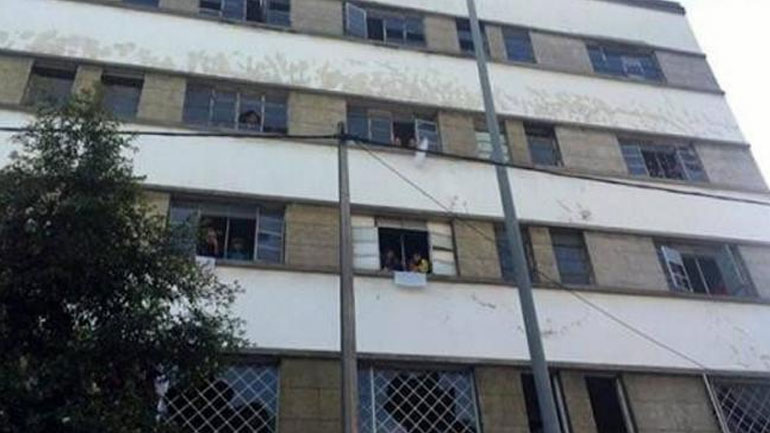 Some 300 Colombian victims of displacement occupied an abandoned building in Bogota demanding that the government fulfills housing and employment promises made.

Over 100 families arrived at the Bogota address by bus and broke in to the abandoned building on Sunday night, scaling ladders up to the second floor from where they waved flags and chanted out of smashed windows.

The protesters, who are among millions of Colombians to be displaced from the countries internal armed conflict, are seeking a response from the government and will “only remove themselves when the director of the Unit of Attention and Reparation for Victims, Paula Gaviria, attends to them.”

“We are seizing this building because the government has not fulfilled [our agreements, so] we will stay here until the commitments are met,” said a spokesperson for the group.

“The government does not comply. They take us for a joke because they know that we don’t have the power to access international rights organizations to assert out rights.” the displaced woman continued.

The group who are allegedly in the building without food, are also demanding a response from the government after they presented a petition in the past week for humanitarian aid, which has not been responded to.

“We have come from all over the country. Here with us are children and grandparents who hope that [the government] will pay us attention and attend to us soon,” said the displaced spokesperson.

According to Radio Santa Fe, the group are suspected to be the same people who occupied Bogota’s domestic flights terminal on September 10, in which protesters were demanding the same attention from the government, which they received when Gaviria agreed to meet with them. The protesters were happy with the turn of events after reparation and housing were promised, and agreed to vacate the building.

Police have asked the current protesters to stay calm and expressed worry over the amount of minors present appearing to be used as human shields said El Tiempo newspaper.

Colombia’s 51 year long armed conflict has resulted in the displacement of more than 6.4 million nationals and counting, according to the government.