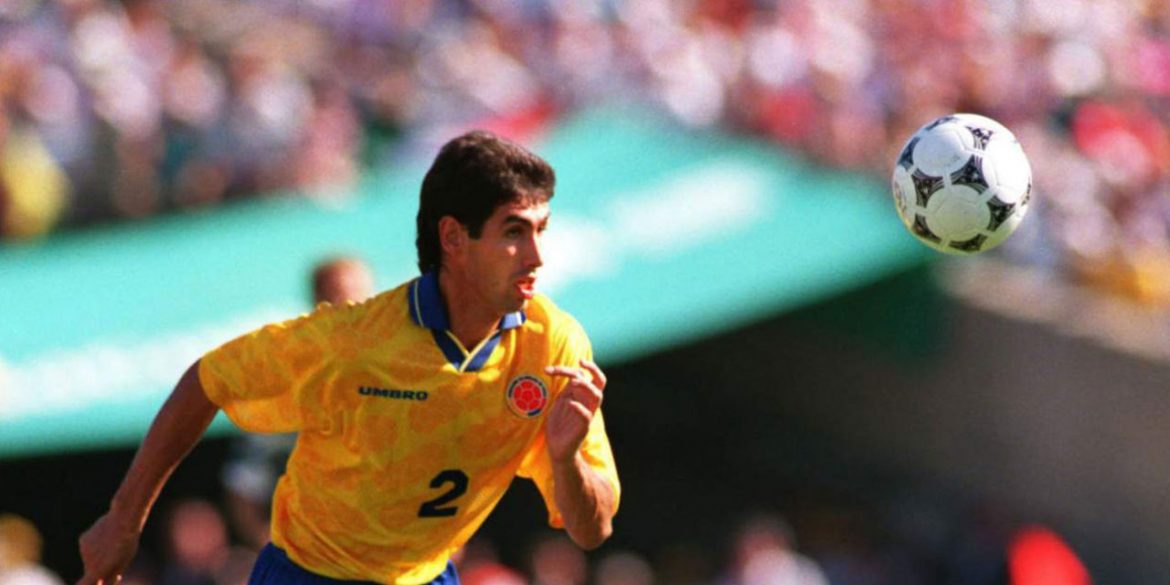 Exactly 25 years ago, the bodyguard of a paramilitary warlord shot and killed one of Colombia’s most beloved footballers outside a Medellin nightclub. The violence did not end with that traumatic experience.

The callousness and brutality of the murder of “the other Escobar” was typical of the violent atmosphere that the footballer’s infamous namesake was partly responsible for cultivating.

The death of Escobar, known as the “gentleman of football” for his affable manner and professionalism on and off the field, was a brutal blow not just for Colombian football, but the entire country.

All because of one own goal.

Colombia were playing their second game of the 1994 World Cup group stage. They had suffered a sobering defeat to Romania in their first game, and needed a win in their fixture against the US to stand any real chance of progressing in the competition.

In the 35th minute of the game, the USA were on the attack, with John Hawkes firing the ball across the face of goal towards an awaiting striker. Escobar, running towards his own goal, instinctively stuck a leg out, wrong-footing his goalkeeper as the ball shot into the bottom left hand corner to give the USA a 1-0 lead, in a game they would go on to win 2-1.

After the game, Escobar was utterly distraught, and wrote in his El Tiempo column of his despair.

It has never happened to me, as an amateur or a professional. And it just happened to occur during the most important moment for Colombian football.

Chillingly, he closed what was to be his final printed piece with the phrase “life doesn’t end here.”

Despite death threats already being issued against the squad, and having the opportunity to visit relatives in the USA, Escobar wanted to distance himself as far as possible from the site of his own goal, returning immediately to Colombia.

On the night of July 1, he visited the El Poblado district of Medellin, ending up in a nightclub with three friends. While in the nightclub, convicted drug traffickers Santiago and Pedro Gallon, two business associates of former President Alvaro Uribe, began to taunt Escobar, shouting “own goal” at him repeatedly.

After asking the brothers to stop, Andres became separated from his friends and went back to his car at 3am, where the brothers and their bodyguard Humberto Muñoz were apparently waiting.

While in his car, Escobar confronted them on his way out, and the situation rapidly escalated. Santiago allegedly told Escobar several times that “you don’t know who you’re messing with,” before Muñoz went up to Escobar and shot him six times in the head.

According to CNN reporting, Muñoz shouted “goal” after every shot, echoing the six times the Colombian commentator repeated the word after the fateful own goal.

The three perpetrators fled, and one of Escobar’s friends took him to hospital where he was pronounced dead on arrival.

Even after the own goal, Escobar was still a much-beloved figure, and his murder was met with outrage across the country and the world.

His brother paid tribute to his memory, telling of how “he never sought to use his fame to his advantage. He was uncomplicated, humble.”

He was widely considered a role model both on and off the pitch, known for dressing in a suit, never refusing to sign an autograph, and his dedication to improving himself as a footballer.

120,000 Colombians joined his funeral march, and their continued love for their fallen hero is evident in the fact that once a year fans bring his photograph to international matches.

The gunman, Humberto Muñoz, was arrested immediately, and was sentenced to 43 years in prison, with this later being reduced to 26. He ended up serving less than 12, and was let out of prison in 2005.

The Gallon brothers, however, walked free after just a couple of months, having been sentenced to 15 months each for trying to cover up the crime, despite the fact that Muñoz later testified that they had ordered him to shoot the unfortunate footballer, using the phrase “they still hadn’t given me the order.”

The Gallon brothers are high-profile professional criminals, and have close links to ex-president Alvaro Uribe. They are associated with the AUC, a feared and famously violent paramilitary group that operated out of Uribe’s ranch in Antioquia.

In 2010, Santiago Gallon was sentenced to three years and three months in prison for his links to paramilitary groups. In 2014, Senator Ivan Cepeda claimed to have “evidence and testimony” linking the Gallon family, the Uribe family and paramilitary group “Bloque Metro,” and called for an investigation to determine their exact relationship.

A lesson not learned

Despite the anguished response to Escobar’s death, the lessons learned after his assassination have apparently evaded many Colombians.

While the threats of organized groups no longer seem as prevalent in Colombian football, death threats by individuals against players are still a cancer on the Colombian game, especially in games of high importance.

The 2018 World cup saw several players receive death threats online, including Carlos Sanchez, who was scapegoated for Colombia’s group stage loss to Japan after being sent off in the 3rd minute.

Colombia’s last-16 exit on penalties to England was also met with a flurry of online abuse, with the players who had missed their penalties subject to death threats.

One post by Twitter user David Castaneda read “Die Carlos Bacca. Son of a bitch. Nobody wants you…you shall not return to Colombia.”

Colombia’s recent exit from the Copa America, also on penalties, saw the threat of violence rear its ugly head again, with Christian Tesillo receiving messages such as “I hope you end up like Andres Escobar.”

Colombia is a football-mad country with a rich sporting heritage, known around the world for producing quality players and some of the most passionate fans around. While the game is usually such a unifying force for Colombians, and the nation itself is a credit to the sport, many would do well to remember the words of Andres Escobar; life does not end here.