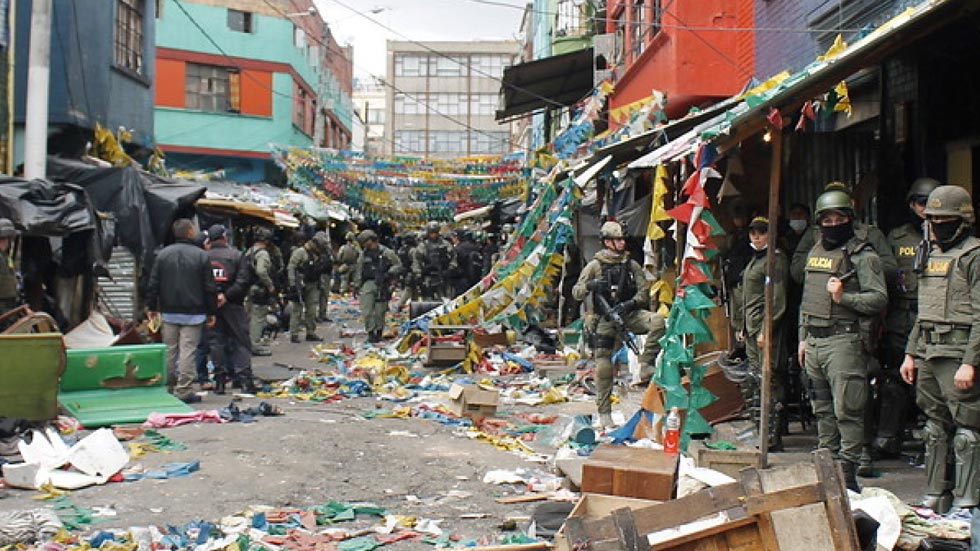 Riot police and the army raided the Bronx, central Bogota‘s infamous drug dealing area, driving out thousands of homeless addicts, only for them to invade another part of the city.

Bronx earned its name from the troubled New York neighborhood, and it is rife with drugs and crime.

Lawlessness in the area became of even greater concern in recent weeks after local media began reporting how children and minors would go to the Bronx to party.

Some of the girls were said to have been recruited for prostitution or got hooked to the highly addictive “bazuco” there.

On Saturday, 2,000 officers drove out the addicts and the homeless who lived there, but many of the evicted did not simply roll over: they invaded the nearby Plaza de España instead.

Over the course of Sunday and Monday around 500 people wreaked havoc in and around the square, located only blocks from the presidential palace.

The rioters attacked police with rocks and molotov cocktails, and the police responded with tear gas.

“Gancho Mosco,” one of the criminal organizations that allegedly ran the Bronx before the police raid, appears to have retaliated by allegedly encouraging addicts to attack police.

They have allegedly been giving the addicts drugs and gasoline to make bombs, and turned the Plaza de España into Bogota’s latest no-go zone.

Hundreds of business-owners in the area have complained about the increased danger caused by those displaced from Bronx.

Their business has been seriously affected and they have called on the police to exercise greater control over the mess they have made.

The government has attempted to clear up Bronx before, the latest attempt being three years ago, but so far the change has never stuck.