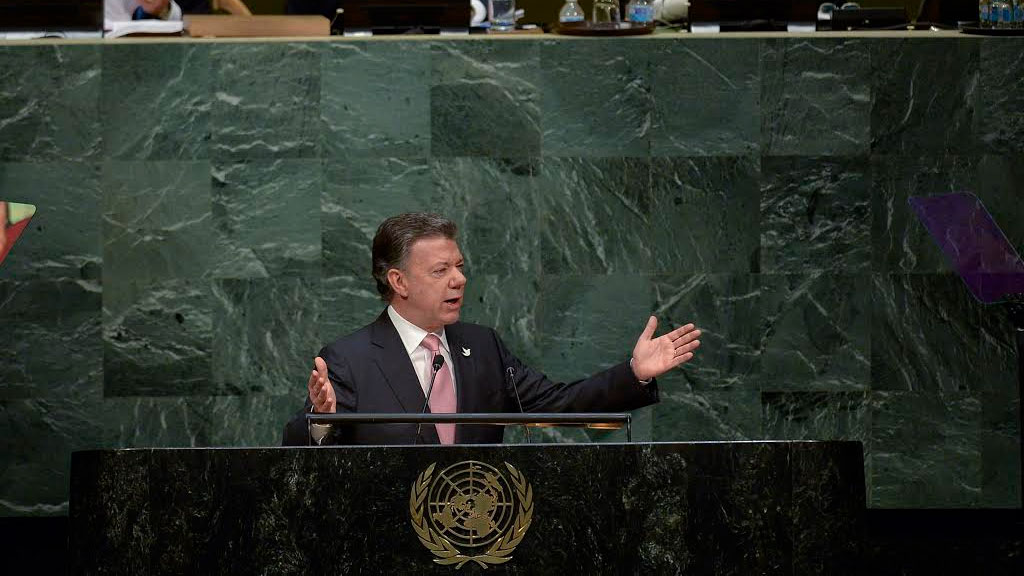 Colombia President Juan Manuel Santos is a world leader in trying to reform global drug policy. But when he spoke at the recent United Nations drug summit and tallied his supporters, the US delegation was nowhere to be seen.

Indeed, the top official for US drug policy, Assistant Secretary of State William Brownfield, was hardly seen at all during the three-day UNGASS meeting (United Nations General Assembly Special Session), which drew about 60 heads of state, including Santos but not US President Barack Obama.

Brownfield’s low profile at the New York City session surprised drug reform advocates as he is the chief of the US Bureau of International Narcotics and Law Enforcement Affairs.

And though it was expected that the US wouldn’t strongly back Santos, the reformers were nevertheless dismayed by how the US played its hand.

US officials’ public comments “were remarkably progressive for the US, especially compared with its historically harsh position. On the other hand, its behind-the-scenes negotiating for the status quo was disappointing,” Hannah Hetzer, policy manager for the US-based Drug Policy Alliance, told Colombia Reports.

It was all in sharp contrast to the happy scene at the White House in February. That’s when a beaming Obama stood next to Santos and praised the Colombian leader for his role in restoring the country’s political stability.

When Santos spoke at the UN drugs session ten weeks later, however, he was not there to support Obama’s “Peace Colombia” aid package.

To the contrary, he was heading a multi-nation effort to uproot the cornerstone of US and global drug policy, which is that non-medical use of drugs is a crime punishable in a nation’s justice system.

“The prohibitionist approach has been a failure,” Santos said in one of many public statements during the UN meeting. “It’s time to leave ideologies behind and embrace the evidence. If something is not working for more than 40 years, logic and common sense tell you that it must be changed.”

Colombia is a leader among the small but growing number of countries that want a thorough re-examination of the three international treaties that in theory govern national drug policies. It’s only “in theory” because the treaties are out of date with today’s realities.

For example, the oldest of the treaties, darting to 1961, established the basic prohibitionist approach and banned all but medical use of marijuana, cocaine and opiates.

But today lots of countries, especially the US, are trying out new ways of legislating marijuana, in violation of the treaty.

Continuing to defend the treaties under those conditions is “insane,” in Santos’ word.

It’s striking that Santo would directly challenge the US, its strongest military and political ally, its largest investor and its largest donor of external aid.

“Colombia is really brave,” said one veteran observer of the drug policy battles, who asked not to be identified.

Since 2000, the US has provided several billion dollars worth of aid to Colombia to implement the war on drugs. For both Colombia and the US, that war has cost hundreds of thousands of victims without significantly reducing drug use or trafficking.

The current US position, announced two years ago by the State Department’s Brownfield, agrees that the treaty language is severe. But the treaties are flexible enough, the US argues, to let individual countries take their own approaches.

At the moment, that ‘flexibility’ is stretched so far as to include executions of drug users in some countries and marijuana commercializations in others.

“It’s clear that international consensus is broken. But those facts aren’t even acknowledged” by the US and other nations of status quo policy, said Canadian MacPherson.

The big danger in allowing the kind of national flexibility the US is calling for, he said, is that it the same flexibility could open the door to countries voiding all sorts of international bans.

“If a country is genuine and sincere about reform they would review the international drug treaties,” said Heather Haase, New York representative of the International Drug Policy Consortium, a global network of over 140 non-governmental organizations.

In the terminology of the drug policy debate, Santos wants a focus on “harm reduction” rather than incarceration. “Harm reduction” refers to techniques for helping people deal with the harmful consequences of drug use, such as needle exchanges to significantly lower users’ risks of disease, which in turn strains a nation’s medical system.

Even the choice of using the phrase “harm reduction” has become a diplomatic hot button. The US and other countries promote individual harm reduction practices but still won’t use the word in treaty talk.

Colombia’s allies in this global debate are mostly Latin American, such as Guatemala, Mexico, Uruguay and Bolivia. The opponents include Russia and most Asian countries.

The US is trying to walk a tight line “midway between lock’em up and legalization,” said David Evans, a consultant for the Drug Free America Foundation, which views the reform effort as a misguided push for drug legalization.

But given the movement in the US toward less restrictive marijuana laws, “the US is in violation of the existing treaties,” Evans said.

The rhetoric of top US officials, including Obama, has shifted and now centers on “public health” rather than the “war on drugs” as the best model for dealing with drug issues. But most US policy—at both national and state levels—remains stuck in the criminalization model.

“The underlying foundation of the war on drugs is still in place. That’s what the Latin American countries want to examine,” said MacPherson.

“Colombia has been the strongest leader in the hemisphere” in challenging the old model, he added.

As proof that the war on drugs machinery is still powerful, one need only look at Obama’s funding proposals in his new Peace Colombia initiative, announced during that February meeting with Santos.

Despite top US officials’ declarations that a public health model is to guide future drug policy, Obama’s proposed 2017 budget for war-on-drug aid to Colombia is 11% higher than this year’s spending level.

In 2016, $169 million is going to what the US calls “International Narcotics Control and Law Enforcement” and “Department of Defense Counternarcotics.” For 2017, Obama asked Congress for a $19 million increase in this Colombian assistance, to $188 million.

So despite the President’s challenge to the prohibitionist model, Colombia’s soldiers are carrying out the old model. Last month Defense Minister Luis Carlos Villegas, a former ambassador to the US, said the country would return to using the US-made chemical glysophate to eradicate coca plants.

To the dismay of the US, Colombia last year banned its use for health reasons. Under its new policy, Colombia will apply the chemical manually on the ground rather than being sprayed from the air by planes, Villegas said.