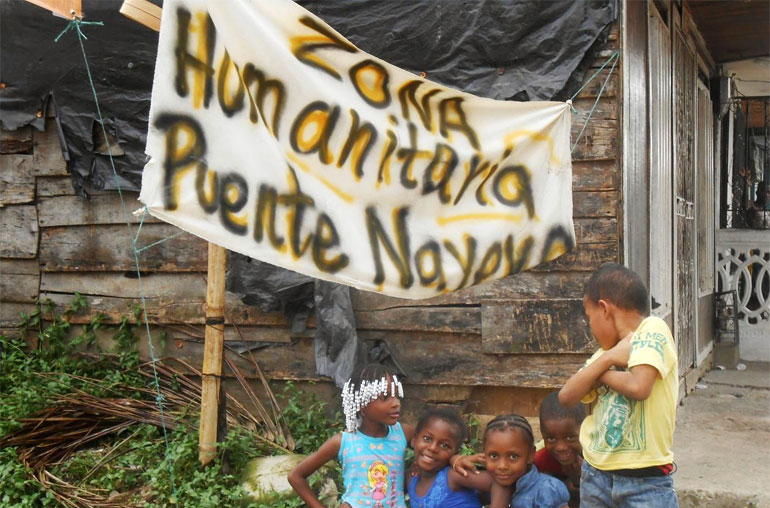 Margaret Mead, a once famous anthropologist, theorized that warfare is an invention created by humankind. She staunchly rejected the notion that war is a biological or sociological inevitability and argued that should a “method more congruent with the institutions and feelings of the period be invented” war would become obsolete and a new invention would supersede its role.

I have often wondered over the veracity of this theory. Over time, citizens have turned to their governments and governments to transnational bodies to prevent citizen abuse during conflicts, end wars, and prevent them from starting. But violence has always remained an option.

Until a small community in Colombia created another possibility, a new hope for peace. Despite a perpetuated cycle of violence and economic deterioration that erodes community bonds and the luxury of creativity, a group of dedicated Colombians has continued to persist in their recognition of the defects of war. And so some have created a new invention, a space in which violent actors are evicted and peace is groomed with non-violence and community bonds.

It is the humanitarian space of Puente Nayero.

Situated against the backdrop of Buenaventura, the people of the beachfront neighborhood of Puente Nayero established a humanitarian space with the aid and accompaniment of the Inter-Church Commission of Justice and Peace. Today, their success is echoed in the warmth that filters through the coconut trees and casts its glow on the children at play below, children who are already guaranteed a healthier future.

Peace is growing, despite the obstacles the city of Buenaventura provides.

With an 80% poverty rate, Buenaventura has been called “ground-zero” for the US-Colombia Free Trade Agreement (FTA). Enacted in 2012, the FTA immediately eliminated 80% of tariffs on U.S. exports to Colombia, allowing a surge of cheap US goods to enter Colombia.

Buenaventura is the primary hub through which 70% of Colombia’s imports and exports pass. As such, this city has been targeted for intensified multinational development and aesthetic improvements to accommodate the heightened presence of business professionals. However, this development has been accompanied by displacement, more turf wars between neo-paramilitaries over drug routes and territory, and increasing levels of violence and economic distress.

While the Colombian government attempts to combat rising levels of disappearances, dismemberments, and murders in Buenaventura by increasing its military presence, local community members report the collusion of armed forces with multinational corporations and neo-paramilitaries. Accounts of abuse feed a pervasive mistrust of armed officials and erodes already fragile community bonds.

Many citizens in Buenaventura are left with no other options but to shut themselves in their homes after dark for protection; be displaced to the cement compound of San Antonio with few economic, educational, or health opportunities; or join a neo-paramilitary group.

This is what makes the community of Puente Nayero so remarkable. Faced with the aforementioned options, the community created another choice. Peace. In April 2014 the community began to evict all violent actors from their land, reclaimed “chop-up” houses previously used for torture, and began the long journey of rebuilding a supportive a social community.

The clothes drying on the wash line and the neighbors meandering calmly throughout the streets mask the extraordinary nature of Puente Nayero in a veil of banality. Yet, amidst the dirt paved streets and wooden homes the movement for peace continues.

In November 2014, paramilitary groups made incursions onto the adjacent street of Piedras Cantan, threatened community leaders and announced their intentions to infiltrate the space. This occured in spite of the community’s repeated demands for police presence in the space and protections for leaders.

The community was granted collective protective measures by the Inter-American Commission on Human Rights (IACHR) in September. This ruling grants official recognition to the humanitarian space as an area under threat and acknowledges the community’s heightened risk level due to the lack of government action.

With this recognition the IACHR has said the Colombian government must comply with the community’s requests for protection. However, history has shown that lack of political will in Colombia can cause well-intended policies to fail.

In order for the community’s needs to be fulfilled the Colombian government and National Protections Unit (a division of the Ministry of the Interior tasked with protecting human rights defenders and other citizens under threat) have to comply. As such, this community’s battle for security and peace is far from over:

What are their needs?

It is not easy to fight for peace – to take up arms and blatantly put your body on the front lines. But it is more challenging to live for peace; to forgo weapons, to rely only on your government and your faith in humanity to protect you from those who strive to fight.

I am privileged because I have never had to make that choice, violence or non-violence. I was born into peace. And now I want to use my privilege to help the peace in Puente Nayero grow and expand throughout Buenaventura.

I want the children in Puente Nayero to dream uninhibited by worries about safety and economic security. I want to believe in Margaret Mead’s idea that warfare can be replaced with a better invention. And this is why I work with Witness for Peace, because they turn my dreams into beliefs and my beliefs into realities.

What can we do?

This editorial was first published on the website of human rights NGO Witness for Peace.