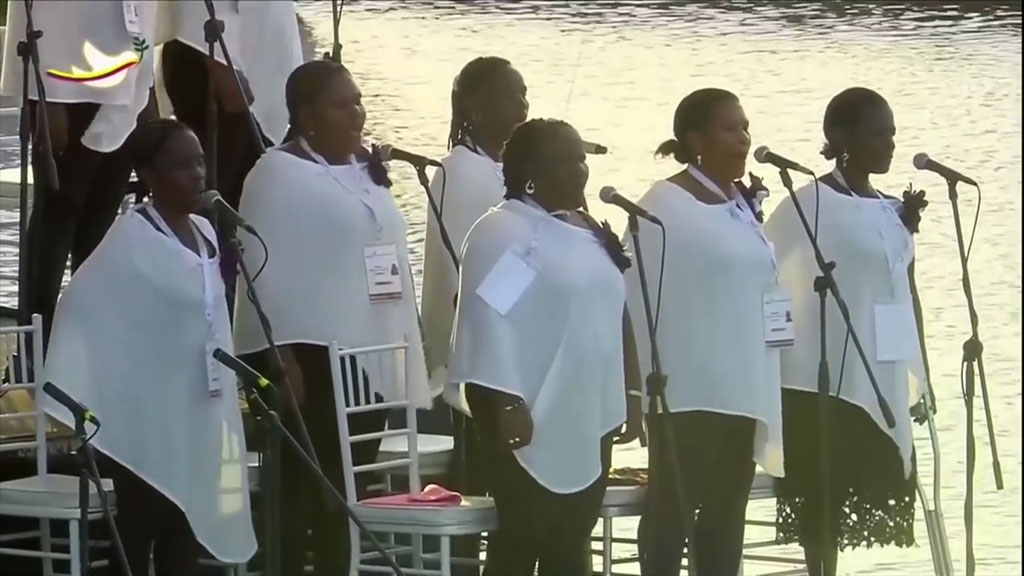 The women of Bojaya: Colombia Reports’ personalities of 2016

The chanters from Bojaya are Colombia Reports’ personalities of the year for providing the country an extraordinary example of how to overcome grief and move towards peace and reconciliation.

In spite of a globally heralded peace deal with country’s oldest and largest rebel group, it’s been an agitated year for many Colombians, and most for the 8 million victims of the country’s armed conflict.

The hemisphere’s most senseless war

After 52 years of victimization by either leftist guerrillas, right-wing paramilitaries and the state, Colombians were harshly confronted by the fact that all the violence was in vain, that absolutely nothing that was promised had been achieved.

After decades of war propaganda and the dividend of peace still abstract to many, the truth hurts. The reds are still here, the oligarchy was never overthrown and drug trafficking is thriving.

Meanwhile, 265,000 Colombians did lose their lives, nobody knows how many tens of thousands of civilians have disappeared and should be presumed dead too, and millions of Colombians had their lands taken away after being displaced.

In the western Choco province, where the war has hit the hardest, approximately 2/3rd of the population is now a registered victim.

This means that two out of three Chocoanos have either been the victim of forced displacement, kidnapping or rape, or have a direct relative who was either killed or forcibly disappeared, i.e. also killed.

However, it has been from exactly from this province and from Colombia’s black and indigenous minorities that the voices for reconciliation have been loudest and where the drive to put Colombia’s bloody past behind it are the loudest.

The most iconic call for reconciliation and forgiveness came from the group of female chanters from Bojaya, a town in the north of Choco where the FARC killed 80 in a 2002 massacre.

The town took part in two reconciliation events with the FARC, and in particular “Ivan Marquez,” the guerrilla leader ultimately responsible for the attack that forever destroyed the town as it was.

Bojaya’s folkloric “alabaoras’ took to the stage of the September 27 peace ceremony both to celebrate that the guerrillas were finally gone, but also to — while the whole world was watching — piss on President Juan Manuel Santos’ bonfire for failing to attend the remaining security issues the women and the country still face.

As if Bojaya had not suffered enough already during the war, Colombia’s voters re-victimized the town’s people by rejecting the peace deal just five days after the women’s touching performance.

Bojaya voted in favor of the peace deal with an overwhelming 96%, and deplored the more fortunate Colombians’ lack of solidarity with their less fortunate counterparts.

While most people in Colombia, and all people abroad, can afford to debate Colombia’s conflict as if there were no war, anyone who has visited a war zone or has talked to the victims — the majority of whom were victimized by other actors than the FARC — understands the urgency to move forward, to get out of this hell.

The Choco town was effectively already reaping the benefits of peace. They had already taken part in a reconciliation meeting with the FARC guerrillas who had caused them all their pain. The guerrillas couldn’t return the dead, but they did return the Christ statue that got destroyed when they bombed the town’s church.

Colombia as a whole isn’t that far yet, and for understandable reasons. The country and its peoples have gained nothing and lost a lot in the war and have yet to be included in any serious peace building efforts. This means that feelings of anger, resentment and even denial are perfectly normal considering the actual circumstances.

While key, reconciliation isn’t easy and cannot be imposed or commanded, especially not in a country as torn to pieces by violence as Colombia. The national grieving process over all those who were lost and will never come back is only just beginning.

But the FARC’s guns have gone quiet, their military might is gone. A peace tribunal and a truth commission will try those who committed war crimes and far-stretching reforms should drastically reduce the incentives for political and drug violence, depending on how well Colombians learn to work together in the process.

Colombia’s social and political conflicts will always remain, exactly like in any other country, but towns like Bojaya will stop being victimized, exactly like in Northern Ireland, former Yugoslavia and South Africa.

The “alabaoras” of Bojaya have given us an extraordinary example in fearlessly and with dignity walking the path towards peace and reconciliation. They did so without compromising their ability to think and express themselves critically.

We invite you to follow their lead and support peace and reconciliation in Colombia as much as you possibly could while continuing to think and express yourself critically.

The negotiators are done and the fighters have left the battlefield. Eight million victims, including the women from Bojaya, now need to be attended to and they need our solidarity.