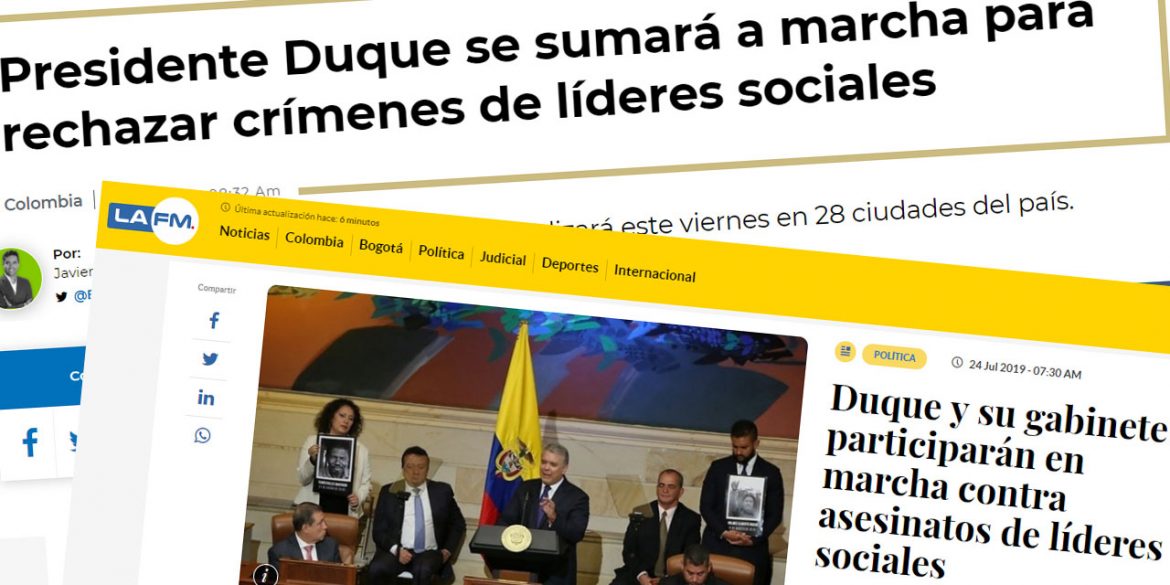 Was Duque going to march in support of Colombia’s human rights defenders?

The headline of conservative radio station RCN on Wednesday couldn’t have been clearer: “President Duque will join march to reject crimes against social leaders,” its website said.

Sister radio station La FM went even further. “Duque and his cabinet will take part in march against killings of social leaders,” that website claimed.

The announcement that never came

Both radio stations reported that RCN “learned that in the coming hours the formal announcement of this decision will be made.”

RCN Radio learned that in the coming hours the official announcement will be made and more details of the mechanism of participation will be given in relation to the mobilization that was called by opposition parties and independent social movements.

What followed was a deafening silence that lasted until Thursday when Duque made no announcement at all.

The presidents told foreign justice ministers that he “joined the cause of the defense of social leaders in the country,” but avoided any reference to the mass mobilizations planned around the world for Friday.

What happened between RCN’s scoop and Duque’s speech?

RCN has long been called “Radio Casa de Nariño” by critics for its closeness to the Duque administration and previously that of the president’s political patron, former President Alvaro Uribe.

Colombia’s current ambassador to the United States, Francisco Santos, was the editor-in-chief of RCN’s morning news program for years.

The false alarm of the radio station that is virtually married to the government provided plenty of food for speculation.

Was RCN wrong? Did Duque change his mind? Was he called back by one of his powerful political backers?

Duque on Thursday falsely blamed the mass killings on “organized crimes group dedicated to drug trafficking and illegal mining,” not radicalized “uribistas” who have been behind much of the aggression.

Friday’s mass mobilizations have been widely reported on by Colombia’s news media and have been endorsed by the UN, the Ombudsman’s Office, human rights organizations and all political parties, with the exception of Duque’s far-right Democratic Center.

The president told the foreign ministers that he “joins the cause,” but to the disappointment of many, Duque did not stray from his party’s boycott of the protests.