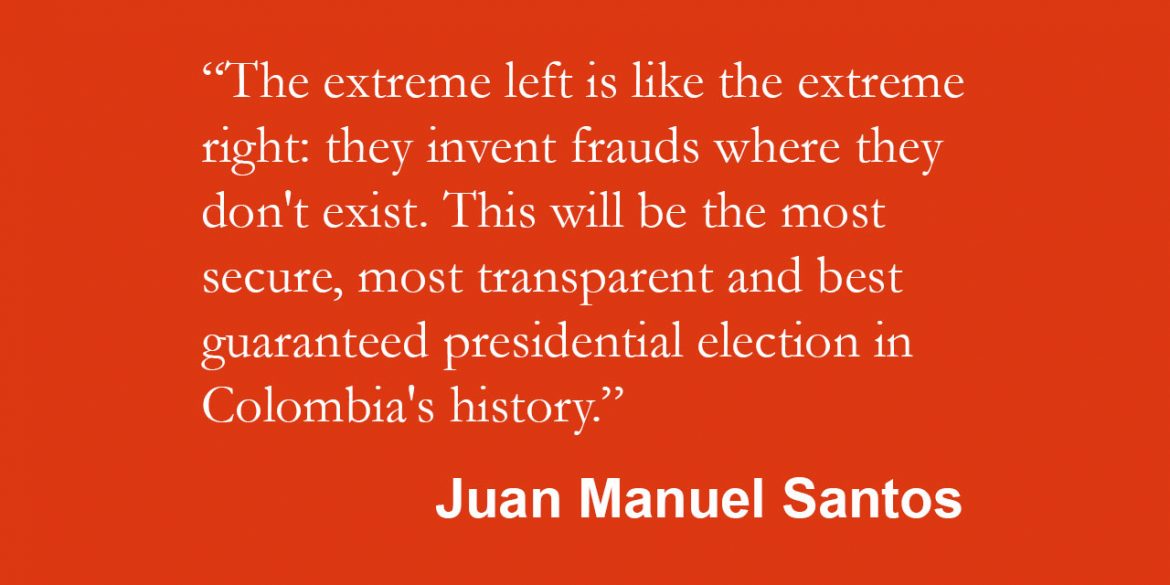 Voting fraud in Colombia: how elections are rigged

Colombia’s election fraud scandal was not invented by the “extreme left” as President Juan Manuel Santos claimed, but is the result of years of neglect to look into widespread rigging.

Presidential candidate Gustavo Petro on Thursday hit the headlines after he called for protests on election day, but he is far from the first to speak up; multiple politicians, two courts and electoral observers have been urging measures for years.

The deteriorating crisis began on March 9, 2014, when millions of Colombians took the polls to elect their current senators and representatives. At least half a million voters were cheated.

Immediately after the election, rumors began to circulate about fraud.

Then-presidential candidate Camilo Romero said on Twitter that ballots were missing across the country while fellow politician Juan Luis Castro deemed it “strange” that friends and family didn’t appear in the books.

Interior Minister Guillermo Rivera, who was running for a senate seat at the time, also said he’d like to “review polling booth figures in some of the provinces in case there are arithmetic errors” in the software used to scrutinize numbers.

Ex-President Alvaro Uribe echoed cries that elections were “illegitimate” and President Juan Manuel Santos, who would be reelected two months later, pretended nothing was going on.

The Electoral Observation Mission (MOE), a watchdog that monitors the electoral process, immediately said there was “reason for suspicion” and concern about some of the “very weak” electoral systems that were considered “permeable to fraud.”

Politicians and MOE asked the National Registrar, the official in charge of the organization of elections, to deliver election results as quickly as possible to allow for a recount.

Despite the flurry of fraud claims, the National Registrar didn’t investigate the matter further and watered down claims that voting had been manipulated.

“The problem in Colombia is that there are two types of candidates: those who win and those who say the Registrar’s office rigged the elections,” then-National Registrar Carlos Ariel Sanchez said.

The MIRA, an evangelical party that had lost its three seats in the senate, conducted its own investigation and found concrete and explosive evidence of fraud.

Around 14,000 polling booths across central and northern Colombia were not counted in the vote while up to 235,000 further votes were affected after it was found software used to scrutinize votes had been sabotaged.

In late June 2014, the Supreme Judiciary Council ordered the National Electoral Council (CNE) to recount the up to 14,000 polling booths.

CNE magistrate Pablo Gil agreed to “comply” with the ruling. Within a month, registry officials confirmed that votes had gone missing.

While electoral authorities and the prosecutor general did nothing, MIRA took the fraud to the State Council, the highest administrative court in Colombia.

The party sued the Colombian state before the Inter-American Court for Human Rights, claiming it was the victim of political persecution.

The State Council agreed to investigate the fraud in May 2015 and ordered the National Registry and National Electoral Council to maintain the chain of custody of the ballots and the computer software.

In February this year, the State Council confirmed MIRA’s claims that it had lost 235,000 votes because of the computer fraud, and that 14,000 ballots had illegally been destroyed.

The National Registry was ordered to fix the security flaws in the vote-counting software while ordering both the Inspector General and the Prosecutor General to investigate the fraud.

The MOE warned political parties about the fraud and urged an audit of the software.

On March 11, Colombia’s voters again took to the polls.

National Registrar Juan Carlos Galindo called the accusations “a lack of respect” and said the voter software was fine.

Petro called for protests after which Santos accused the candidate of promoting an “extreme left” invention.

The extreme left is like the extreme right: they invent frauds where they don’t exist.

Galindo and Santos were caught out, effectively perpetuating the negligence that has threatened the very foundation of the country’s democracy, free and fair elections.