The victims of Colombia aerial fumigation

The rural farmers who are negatively impacted by aerial fumigation in Colombia are one of the most overlooked groups affected by the continuing drug conflict in the South American nation.

The livelihoods and health of small-scale farmers are continuously threatened by the damaging effects of chemical pesticides dropped from government-contracted planes in Colombia’s remote regions. ‘Aerial fumigation’ targets the rural areas where coca cultivation is possible.

Colombia is one of the largest producers of cocaine in the world. The profitability of drug growing, production and trafficking has contributed to a decades old conflict in the country between left-wing, right-wing groups and non-ideological drug gangs struggling for control of the trade.

Colombia is estimated to supply around 90% of the cocaine that makes it to the United States.  Since the overwhelming majority of cocaine entering the United States originates in Colombia the United States gives millions of dollars each year to Colombian anti-drug forces in a program called Plan Colombia. According to Daniel Mejia, the current president of the Colombian government’s special advisory commission on drug policy, the United States government continues to advocate aerial fumigation of coca fields despite clear human rights problems and proof that this eradication method costs exponentially more than attacking drug traffickers.

Thousands of rural Colombian farmers have been victimized by the side effects of this eradication method since Colombia began the aerial fumigation of coca crops during the mid-1990s with financial support from the United States.

Small-scale Colombian farmers, known as “campesinos,” like Blanca Nohemi Arcos and Doris Iles are painfully familiar with the most frequent side effect of fumigation, the destruction of food crops. Nohemi and Iles form part of a six women cooperative organization that grows pineapples in a remote region of the southern Colombian state of Putumayo bordering Ecuador and Peru. The women are insistent that they grow only pineapple and no coca, the plant used to make cocaine.

The two farmers tell their story in a video produced by internationally recognized Colombian human rights defender, Nancy Sanchez, who spent several years working in the region. Nohemi and Iles said that when their pineapple harvest is successful, each of the women carries 14 to 15 pineapples over a long, unpaved road until they reach a regional highway where they sell their fruits and other crops to passing cars. It is difficult work but allows the women of the cooperative to support their families.

In early 2013 the women’s crops were mistaken for coca and were smothered with a concentrated dose of “Round-Up,” an indiscriminate pesticide that kills almost any plant it touches. Nohemi and Iles are visibly shaken by the destruction of their crops, nearly ready for harvest. The women state that a successful pineapple crop is valued at as much as $4,000 an acre, representing a tremendous loss.

Of further concern for the women is that, without the income generated from the pineapple harvest, they will be unable to pay debts they have accrued from banks in return for leasing the land. The indiscriminate fumigation has left these women unable to feed their families or repay their debts. One of the women said, “In truth I am left without words as to why the government would do this, here there is only pineapple. Now we are left without the means to survive.”

The six women growing pineapples in Putumayo are far from the only victims of this eradication practice. In the south central state of Guaviare, in another video documenting the victims, this time by the human rights organization Witness for Peace, a farmer explained that because the fumigation planes fly so high, supposedly to avoid attack from armed groups active in the area, the pesticides are left to the direction of the wind.

A recent fumigation has visibly wiped out his entire crop of yucca and nearby wild plant species. The map below, released by the United Nations Office on Drugs and Crime (UNODC) in 2013, evidences the vast swaths of Colombian territory that are fumigated by the government. Much of the fumigated area does not contain coca. 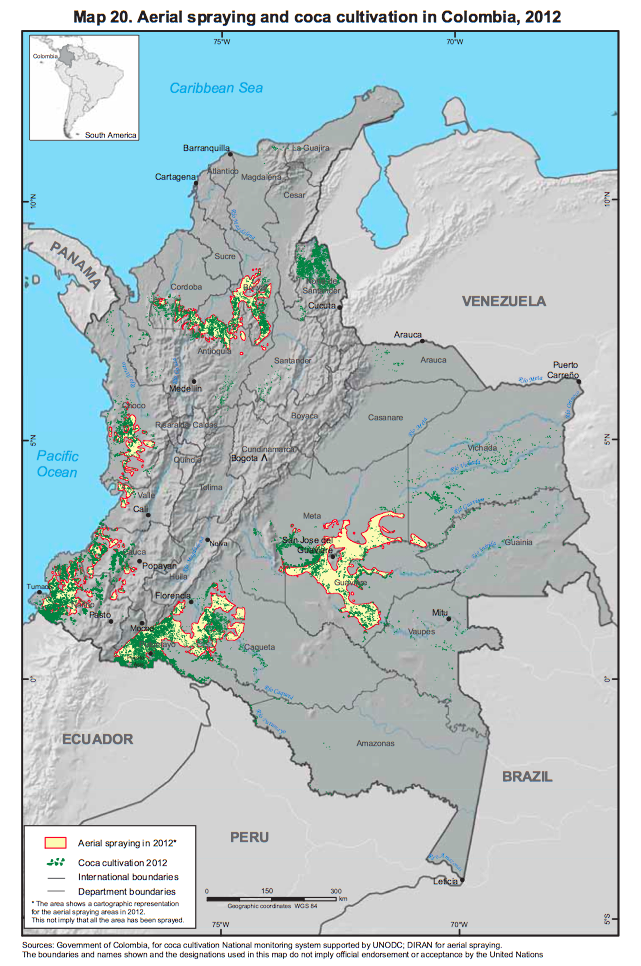 In an interview with Colombia Reports,  Sanchez said that many farmers support alternative development initiatives like switching to growing pineapple and other legal crops. However, the government does not acknowledge or support shifts to legal crops and continues to fumigate both coca and legal crops. She calls it “completely adverse to (human) rights. The state supports things that are very indignant.”

In a documentary produced by Sanchez, the pineapple farmers asked that if the government insists upon destroying coca that at least they should send people who know the difference between coca and legal crops. They also asked the government to compensate them for the value of destroyed crops.  This request is extremely unlikely to be heeded.

Sanchez told CR that the Colombian government compensated the farmers “nothing, the victims of aerial fumigation receive nothing, absolutely nothing. In Putumayo 0.0 to 0.1% (receive compensation).”  Sanchez said that this has resulted in decreasing complaints from farmers.

Adam Isacson, a senior associate for the Washington Office on Latin America (WOLA), also told CR that compensation cases were “In the low double digits,” out of thousands of complaints. He added that the majority of those compensated were industrial sized landowners and almost never the small-scale farmers.

An integral problem of the compensation process is that the administration that processes the complaints of legal crop destruction by aerial fumigation is the same department responsible for the fumigation said the WOLA expert. These administrators often demand intricate details, such as geographic coordinates, that poor farmers cannot provide.

Colombia’s largest compensation was actually not given to Colombian residents. In September 2013 the Colombian government agreed to pay Ecuador $15 million for fumigating crops over the Ecuadorean border and to cease future fumigation within six miles of the border.

Another farmer, now displaced and supporting a family of at least six, told Witness for Peace that he had to leave his land because his food crops were destroyed and he could no longer feed his family. The farmer added that despite his unwillingness to break the law “at least with coca a family could survive on a harvest of two little kilos, but now without land, what are we going to do?”

For victims of aerial fumigation, not even displacement is always a possibility. While Pedro Arenas, the former mayor of Guaviare’s capital, San Jose del Guaviare, told Witness for Peace that victims from fumigated areas have added to the flow of displaced persons in Colombia’s cities, some farmers find themselves unable to leave.

This is largely due to the number of landmines scattered by armed groups on roads, fields and in the jungle, according to Sanchez. Many victims of aerial fumigation are trapped without food or income by an invisible mine barrier. Sanchez stated that many women, children and particularly livestock fall victim to these landmines.

Another serious consequence is aerial fumigation’s affect upon human health. Besides malnutrition due to crop destruction, the chemical used in Round-Up, glysophate, has suspected links to several health problems.

The National Pesticide Information Center (NPIC) defines glysophate as “a non-selective systematic herbicide.” The NPIC reports no links to human health problems in small doses. However, the concentration of glysophate used in aerial fumigation in Colombia (44%) is reportedly five times higher than recommended by Round Up (1-7%) and almost double the maximum concentration limit (29%).

Up in the northwestern state of Choco, members of an indigenous group named the “Embera” are reportedly experiencing health problems from aerial fumigation. Despite renouncing coca cultivation in April 2012, members of the “Urada,” Embera indigenous community, have reported continuous fumigation of their legal crops.

According to the ABColombia human rights advocacy group that works with this community, fumigation is contaminating water supplies and poses a significant health risk to the populace.

WOLA representative, Adam Isacson, told Colombia Reports he believes that glyosphate can cause short term (few weeks) illnesses such as respiratory, gastrointestinal and skin problems. However, he has not seen conclusive evidence upon more serious health problems.

Daniel Mejia, an economist and president of the Colombian government’s special narcotic advisory commission, produced a report on health problems reportedly linked to fumigation in 2012 with fellow Professor of Economic Development at the University of the Andes Adriana Camacho that found “aerial spraying of glysophate increases the probability of dermatological problems and abortions.”

The study also noted that it was not able to find conclusive links to respiratory problems and could not determine long term health effects based on the study’s five year duration.

The US and Colombian government still support the use of aerial fumigation to reduce coca production despite increasing evidence suggesting that it is ineffective.

According to Isacson, Colombia’s government claim that coca production has been reduced since 2007, partially due to aerial fumigation. He added that this same period actually coincides with a reduction in the level of aerial fumigation indicating that the coca plant reduction seen during this time frame must be due to additional causes. This is supported by the UNODC graph below. 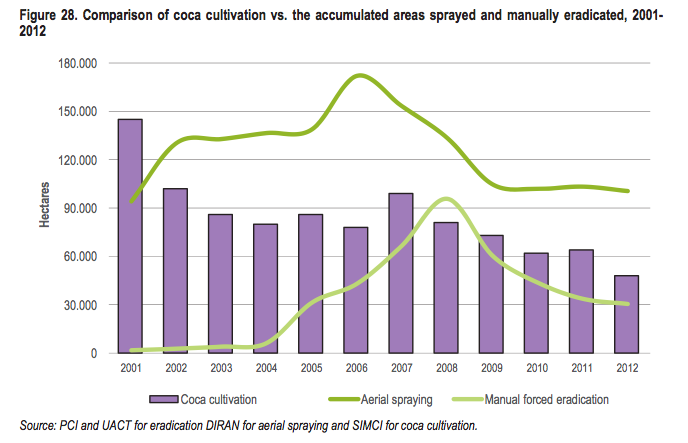 Another reason the WOLA expert said fumigation continues is that aerial fumigation is “safer” and easier than manual eradication, the second most popular form of coca reduction practiced by Colombian security forces.

The 107 manual eradicators killed since 2005 by landmines and armed groups demonstrate the truth in this argument.

Sanchez, Isacson, Mejia, and Colombian congressmen, such as Guillermo Rivera, and many national and international human rights groups have concluded that aerial fumigation is not an effective deterrent to coca production and creates significantly more problems than it solves.

Manual eradication is dangerous and does not treat the sources of the problem. For example, a lack of social and economic infrastructure and protection from criminal traffickers, who operate in the rural regions of Colombia.

Aerial fumigation is currently practiced in exactly one nation on earth, Colombia. Despite widespread poppy growing in Afghanistan, Isacson said the United States government decided against aerial fumigation because counterinsurgency threats in the relatively stateless country were so great.

Isacson pointed out to CR that regions where aerial fumigation is concentrated also lack institutional development, and some are so remote that have have a currency shortage. For Isacson it is essential to integrate these regions into the country rather than continue fighting a drug war with glysophate fumigation.

Victims of aerial fumigation “must be given immediate food security, productive projects, and ultimately have a government under which to live.”

Social and economic development is the key to reducing coca production. If rural Colombian communities are left without alternative development opportunities and the only clear government presence are fumigation planes passing overhead, the meager salary offered by growing coca may not be the best option, it may be the only option.