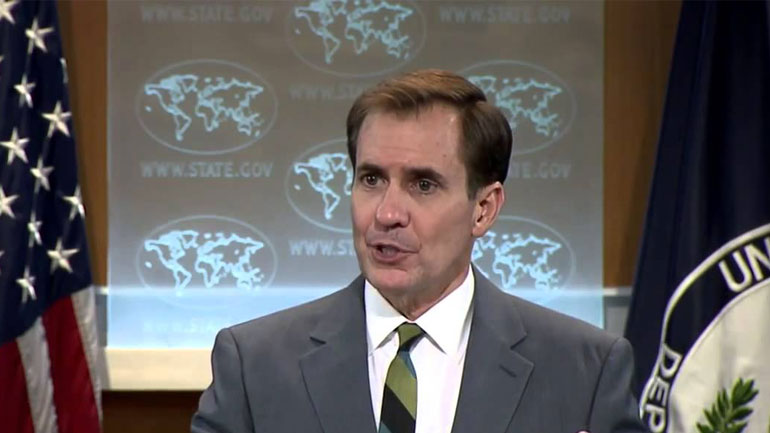 The United States said Saturday that it would work with Colombia and Venezuela to solve an ongoing border conflict that has displaced more than 8,000 Colombians living in the neighboring country. Venezuela rejected the “interventionist” offer.

In a press statement, US State Department spokesman John Kirby said that the administration of President Barack Obama “supports efforts by Colombia and Venezuela to resolve the dispute diplomatically.”

Additionally, said Kirby, “we stand ready to work with both countries and other regional partners to find a peaceful, humane, and enduring solution.”

The State Department statement was fiercely rejected by the Venezuelan government for reminding the administration of President Nicolas Maduro that “deportations should take place in accordance with international law, respecting the human rights of all involved, and in coordination with the receiving country” and that Colombian “refugees with recognized protection concerns should not be deported.”

The socialist-run South American country has long had strained relations, particularly after accusing a number of top Venezuelan officials of drug trafficking.

Venezuela has long accused Colombia of fueling drug trafficking and contraband smuggling in the border region.

The country last week deported more than a 1,000 Colombians, a number of whom had refugee status after fleeing their home country’s 51-year-long armed conflict.

According to the United Nations, more than 7,000 Colombian nationals have fled Venezuela’s Tachira State over the past week out of fear for persecution. The influx of refugees has caused a humanitarian crisis in and around the Colombian border city of Cucuta.

Rodriguez said on Twitter that the current situation at the bilateral border was due to a spill-over of Colombian “paramilitarism and drug trafficking” into Venezuelan territory, and the Colombian “promotion of the destabilization of Venezuela’s economy though monetary attacks” and contraband.

Following the unexpected displacement of thousands across the border, and ongoing accusations that Colombians are behind Venezuela’s precarious economic situation and responsible for paramilitary drug-trafficking activity in the border region, Colombian President Juan Manuel Santos recalled his ambassador to Caracas, after which the Venezuelan government was called back from Bogota.

The center-right-led Colombia has long been a strong ally of the US in South America. This contrary to Venezuela, whose Socialist government has been one of the continent’s most vociferous critics of “imperialist” US foreign policy in Latin America.

Santos, whose country’s Venezuelan border region depends on trade with the neighboring country, has long succeeded in maintaining cordial relations with Maduro and his predecessor, the late Hugo Chavez, until this week.

Also this week, Santos tried to refrain from further agitating the situation until after a meeting between the two countries’ foreign ministers on Wednesday.

However, when Colombian Former Minister Maria Angela Holguin failed to end the verbal attacks on the country and persecution of Colombian nationals in Tachira, Santos recalled ambassador Ivan Rincon and called on international bodies like UNASUR and the Organization of American States (OAS) to offer diplomatic support.

The OAS scheduled a special meeting on the border crisis for Monday, while UNASUR failed to convene one, according to presiding nation Uruguay because “the agenda of the foreign ministers is very complex.”

The OAS meeting is not hindered by traveling foreign ministers as each member nation has a permanent representative at the Permanent Council.

Leaving the humanitarian crisis to Colombian authorities and the OAS meeting to Venezuelan representative Roy Chaderton, Maduro and Rodriguez flew to Asia on Saturday to attend state visits to Vietnam and China, allied countries that could help curb a further deterioration of the economic crisis in Venezuela where inflation has spiraled out of control and basic goods are becoming scarce.

Venezuela’s president and foreign minister will not be able to attend any unilateral meetings until after September 7 when they return from Asia.