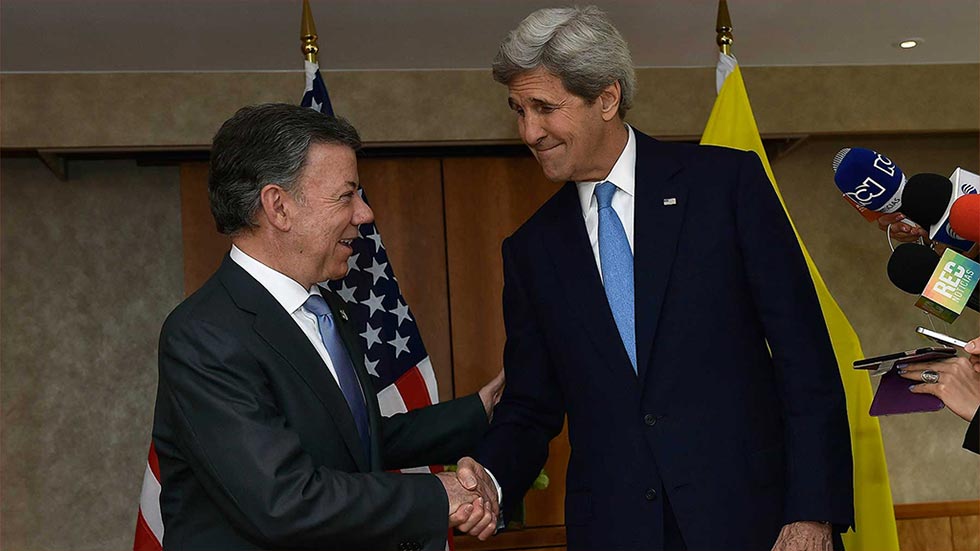 US Secretary of State John Kerry reiterated his country’s support for Colombia in the aftermath of a peace deal with leftist rebels during a meeting with President Juan Manuel Santos in London on Tuesday.

Kerry met with Santos before the international summit against corruption in the British capital and pledged the continued support of the US for the peace process with Marxist-inspired rebels the FARC and ELN.

“We encourage you to bring this to fruition and we are fully committed to the post-settlement process ,” Kerry was quoted as saying by the Colombian president’s website.

The US has been a significant contributor to the dialogue so far and has already made guarantees to the FARC that the US will provide support and protection if they agree to lay down their weapons.

Kerry acknowledged that international cooperation will be crucial, should Colombia’s government and the guerrillas finally reach a settlement.

“The implementation of the agreement will require significant global commitment,” to bring to an end what he described as “the longest war in America and one of the longest of the world”.

The US secretary of state added that, “US President [Barack] Obama is very committed, not just to reach an peace agreement but to help achieve a real peace.”

Colombia peace talks miss deadline but not without progress

Santos’s on his part stated that “we are grateful for the support we have received from the United States since the beginning, a crucial support.”

The Colombian government are currently locked in the final stages of talks having missed the March 23 deadline but Santos expressed his optimism that a final agreement is close.

“We hope that in the near future we can complete (the peace agreement) and start building a true peace, which is the post conflict,” he said.

The final issues on the table in Havana center upon a bilateral ceasefire and the FARC’s demobilization, disarmament and reintegration.

The surge in activity from the country’s neo-paramilitaries has compromised the rebels’ willingness to disarm.

International cooperation from the US, the UN and the EU will be essential to provide for the post-conflict reintegration should an agreement be reached.

Colombia’s internal conflict, which began as a peasant uprising in 1964, has involved guerrillas, paramilitaries and state agents, leaving 260,000 dead, 45,000 missing and 6.8 million displaced.