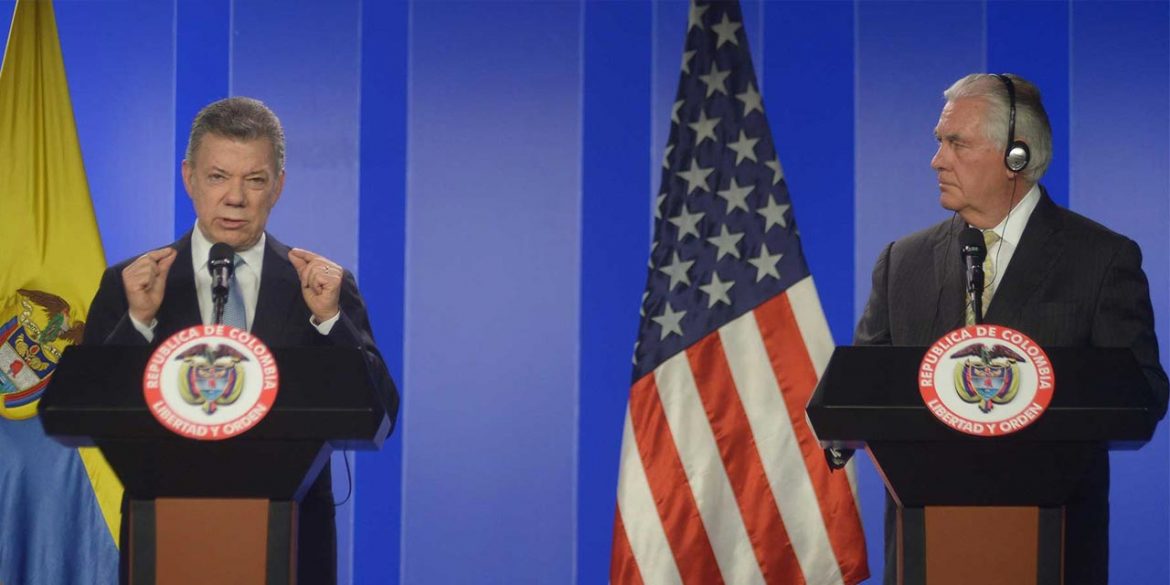 US fiddles while Colombia threatens to burn

The United States is failing to address the violence that threatens to undo the efforts of its most loyal ally in Latin America, Colombia, to make peace and drastically reduce cocaine production.

The unrelenting wave of assassinations of rural community leaders—the biggest threat to Colombia’s peace process and counter-narcotics efforts—went unmentioned in the recent mini-summit between Colombia President Juan Manuel Santos and US Secretary of State Rex Tillerson.

In all Tillerson’s public comments, there was not a hint of awareness of how the violence is reversing efforts to end half a century of armed conflict and curb coca cultivation.

The Secretary of State ignored the fact that Colombia’s counter-narcotics efforts are an integral part of the country’s historic peace process.

Colombia’s peace process disarmed the FARC and now seeks to replace many of the country’s 148,000 hectares of coca, the base ingredient for cocaine.

Illegal armed groups, however, are violently opposing both the peace process and the counter-narcotics strategy by assassinating farmers who promote the removal of coca in their communities.

Many in the international community have rung the alarm about the more than 170 social leaders who were assassinated since the peace process came into force, but not Tillerson. While in Bogota to meet with Santos, the former oil executive merely parroted his government’s obsession with cocaine production estimates.

Two days after the US’ top foreign policy official left, two more leaders were killed in the Cauca province, Orlando Grueso and Jonathan Cundimi. Both were advocates of the voluntary substitution of coca for other cash crops.

The social leaders and at least 37 demobilized guerrillas have been murdered since a peace treaty with the FARC was signed in December 2016.

Twenty of these leaders were farmers promoting crop substitution, the counter-narcotics strategy that seeks to reduce the production of cocaine after decades of failures.

Colombian think tank Indepaz, which is monitoring the drug effort, said the disappointing results are due to extremely violent opposition from drug trafficking groups along with government failures to implement the peace process.

The crop substitution program is suffering major financial shortages as the US refuses to invest counter-narcotics funds in projects involving former members of the FARC, which it still formally labels a terrorist organization.

The US encourages the forced eradication of coca, a controversial time-consuming strategy that has led to numerous violent clashes between security forces and coca growers.

But the UN has said repeatedly that experiences in Peru and Bolivia have proven that crop substitution and rural development, not forced eradication or aerial fumigation, are the most effective ways to curb drug trafficking.

In 80% of the coca fields that were reported as eradicated or fumigated by the Colombian military, farmers had simply replanted coca, according to the UN’s Office on Drugs and Crime.

The current murder wave summons memories of the 1980s and 1990s, when the US supported paramilitary death squads that murdered several thousand members of the Patriotic Union, a legal, leftist party of which the FARC was a part.

The virtual extermination of their political party radicalized the rebels and spurred the most violent episode of Colombia’s armed conflict and the biggest boom in history for cocaine trafficking.

Tillerson said nothing during his visit to reassure peace advocates, who fear a bloody repetition of history. Not surprisingly, his trip prompted no enthusiasm either from Colombian or US commentators.

Colombian newspapers highlighted the fact that Tillerson publicly acknowledged what the entire world has known since the 1970s, that the US is the world’s largest cocaine consumer.

Christopher Sabatini, executive director of the NGO Global Americans, damned with faint praise in a New York Times op-ed, writing: “The [US] administration’s rhetoric on immigration, free trade and American allies’ commitment to battling the scourge of narcotics—not to mention Mr. Tillerson’s embrace of the Monroe Doctrine—have weakened Washington’s leverage throughout Latin America… Mr. Tillerson may have incrementally improved America’s standing in the region, but with all his baggage, he couldn’t fully restore it.”

Adam Isacson, a Colombia expert at the US-based Washington Office on Latin America (WOLA), tweeted that “the only time Rex Tillerson uttered the word ‘peace’ during his entire appearance with President Santos” was to allege that “the rapid increase in coca cultivation… was an unintended consequence of the peace that was negotiated with the FARC.”

That solitary back-handed reference to peace, said Isacson, “tells you most of what you need to know about current US policy.”

The US government must base its counter-narcotics strategy not on the fallacy that peace with FARC drives Colombia’s coca cultivation, but on the fact that the world’s insatiable appetite for cocaine, particularly America’s, is responsible.

Furthermore, for the first time in history, the United Nations is actively involved and monitoring the former guerrillas who once protected the lower echelons of the drug trade and are now helping a transition to a legal economy.

This is an historic opportunity not only to help Colombia but also to actually improve the public health and national security of the United States. But to capitalize on the opportunity, the US must change from within and stop blaming the Colombians.