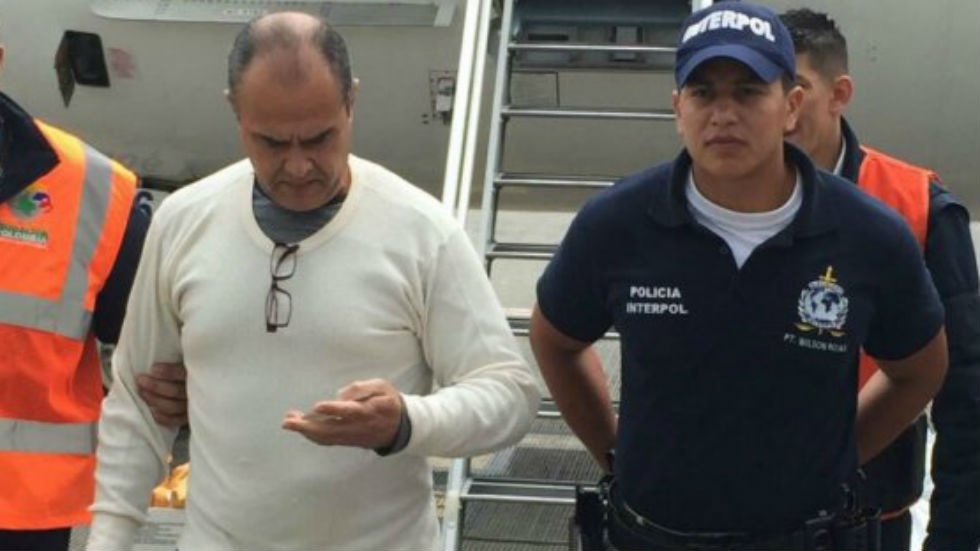 US deports conspirator in 2002 murder of Colombia journalist

US authorities on Monday deported to Colombia a convicted conspirator in the 2002 murder of a journalist in the Caldas province, according to Colombian authorities.

Fabio Lopez Escobar aka “Rama Seca” who was sentenced to 28 years and 10 months in prison in 2014 for his role in the murder of Orlando Sierra, was captured on Friday close to the US-Mexico border by US Immigration and Customs Enforcement (ICE).

His capture and deportation comes as a result of years of international police co-operation after he reportedly fled the country in 2008 earning himself a red circle on the Interpol “wanted list”.

“Thanks to international cooperation treaties, we managed to capture them,” confirmed the Colombian judicial police (DIJIN) on their Twitter account on Monday.

In addition, DIJIN told El Tiempo newspaper that “he was arrested by Border Patrols and ICE agents with support from Dijin officials.”

Orlando Sierra, at that time deputy director of the leading newspaper La Patria, was gunned down by assassins on a central street in the provincial capital Manizales on January 30, 2002.

A 2014 ruling from a Manizales court deemed that Rama Seca had been a “co-author” in the conspiracy, hiring the assassins to murder the journalist who had revealed details of corruption practices by politicians within the province in his Sunday column “Meeting Point.”

Former House Representative for the Caldas province Ferney Tapasco was arrested on November 1, 2015 four months after he was convicted and sentenced to 36 years in prison for his role in the conspiracy.

Authorities continue to search of Jorge Hernan Lopez Escobar, brother of Fabio, who also was sentenced in accordance with the same involvement.

The complex conspiracy leading to the murder of Orlando Sierra followed the same pattern as many more In Colombia whereby revelations of political corruption led to the solicitation of assassins to silence the press, adding further to the scandal known as “parapolitics”.

The guilty verdict of the former Caldas congressman for this crime placed him amongst dozens of former political figures who will spend time behind bars for links to paramilitary organizations for which Rama Seca will also pay the price.

Colombia’s paramilitaries were created in the 1980s by drug traffickers and ranchers to counter leftist rebel kidnapping and extortion. But they evolved into drug-trafficking gangs.

Links between politicians and paramilitary groups, is not an uncommon occurrence, as some 140 former congressmen have pending criminal investigations against them.