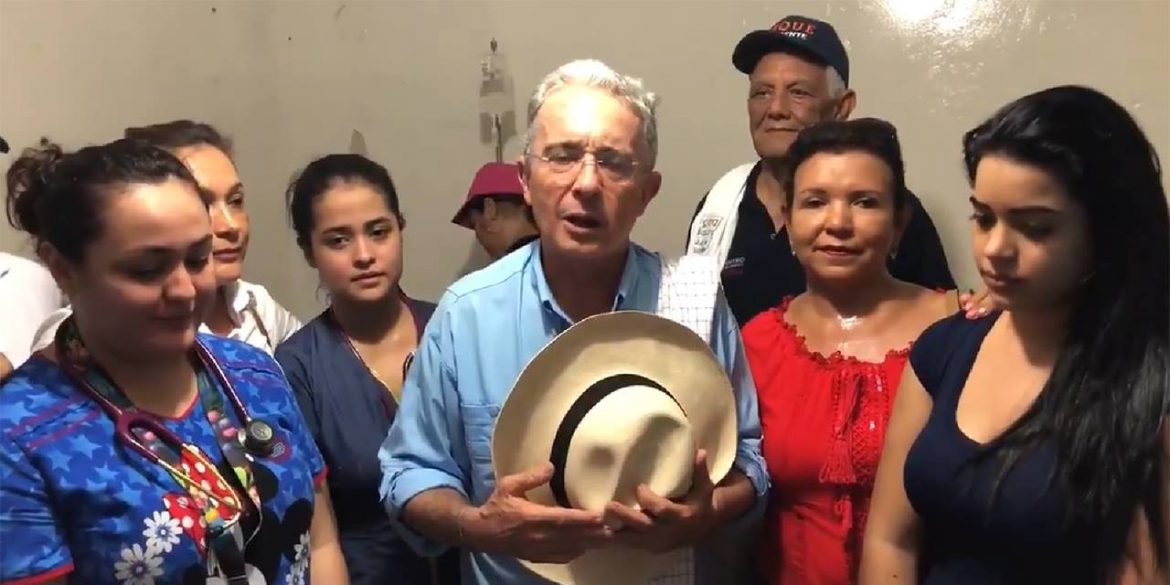 Alvaro Uribe and some of his supporters (Image: Twitter)
News

Colombia’s former President Alvaro Uribe retracted his request to resign from the Senate on Wednesday as his lawyers prepare for a criminal investigation against the political leader.

Uribe made his change of heart public on Twitter where he said he asked Congress President Ernesto Macias “to retain my letter of resignation without consideration.”

Macias is a staunch follower of Uribe and a member of his hard-right Democratic Center (CD) party.

In an interview with Blu Radio, the senator confirmed he had been notified of Uribe’s “intention not to resign.”

Macias and several other CD lawmakers had asked Uribe to reconsider his apparent panic reaction on Monday last week after he was called to trial by the Supreme Court.

The high court suspects that Uribe and a number of his associates have been tampering witnesses who claim that the former president and his brother formed death squads in the 1990s.

The former president is expected to appear in court on September 3 to be interrogated about his alleged role in recorded attempts to coerce witnesses.

Uribe has admitted to being a former associate of the Ochoa crime family, who founded the Medellin Cartel together with late drug lord and Congressman Pablo Escobar.

His legal troubles, however, are over his alleged leading role in the formation of a death squad after Escobar was killed.

Uribe has denied any ties to the “Bloque Metro” and was recorded talking to one of the founders of the far-right paramilitary group as part of the alleged conspiracy to prevent witnesses from coming forward.

According to the former president, attempts to bring him to justice over his allegedly criminal past are politically motivated.

Uribe began his political career in the 1970s and rose to prominence in Medellin and the surrounding Antioquia province during the rise of the Medellin Cartel.

Despite the criminal charges, the former president continues to enjoy support from a minority of conservative and far-right voters; he was reelected to the senate in March with more votes than any other senator.

According to the a poll conducted by pollster CNC, the majority of Colombians supports the Supreme Court decision to try Uribe.

While by far the most prominent, Uribe is not the only Colombian politician in trouble with the law; more than 60 lawmakers have been sentenced to prison for using death squads to inflate their political or economical power.