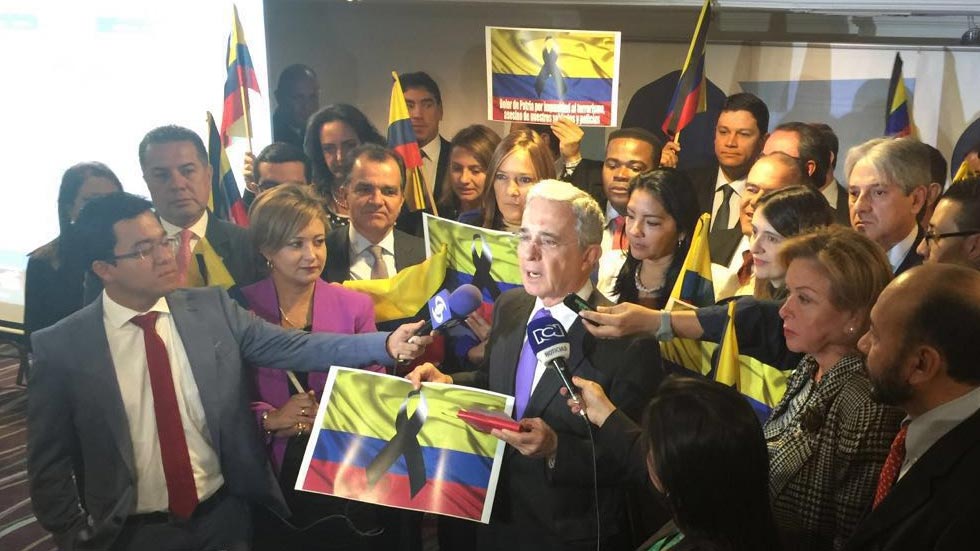 In his first contribution to a peace deal between Colombia’s government and FARC rebels, former President Alvaro Uribe made proposals already agreed to in a signed pact he helped sink in a referendum on Sunday.

His first proposal was to grant amnesty to rank-and-file guerrillas, something already agreed on by the FARC and the administration of President Juan Manuel Santos.

Uribe also said he wanted judicial aid for members of the security forces on trial for crimes committed in the conflict. However, this is already government policy unrelated to the peace accord with the guerrillas.

The transitional justice chapter of the peace deal, in fact, allows lowering the sentences of hundreds of soldiers currently in prison for war crimes, most of which were committed under Uribe’s watch.

Also his third proposal, the effective protection of demobilizing guerrillas, has already been agreed upon.

Uribe’s only novel proposal for the peace is to remove the possibility of amnesty for guerrillas engaged in drug traffickers, a drum he has been beating for years.

However, this proposal is unlikely to be agreed on by the FARC that for decades relied on drug trafficking to finance its operations and more.

Ever since formal talks began in 2012, Uribe and his Democratic Center party have rejected and discredited the talks while fomenting widespread resentment against the guerrillas accused of many thousands of human rights violations and war crimes.

The stakes for Uribe are high and the president is playing a risky game, because with the reopening of the negotiations his own presidential immunity could be put on the table.

This immunity reportedly was negotiated by Santos personally in an attempt to quell his predecessor’s ongoing opposition to and lack of collaboration with the talks.

The war crime claims implicating the former president and a number of his allies could be transferred to the transitional justice system that is part of the peace process that began Tuesday last week, but was stopped in its tracks on Sunday.

An additional Truth Commission could reveal more about Uribe’s responsibility in the widespread human rights violations and war crimes committed when he was president.

If Uribe loses his presidential immunity, he could be criminally charged for the systematic killing of civilians to inflate the military’s success rates that become commonplace when Uribe was president.

Courts are already waiting to deliver evidence to the transitional justice system of Uribe’s alleged complicity in a 1997 massacre.

Uribe’s brother is already in jail for allegedly forming a paramilitary group in the 1980s and his cousin, a former senator, was sentenced to prison for conspiring with paramilitary death squads for his political benefit.