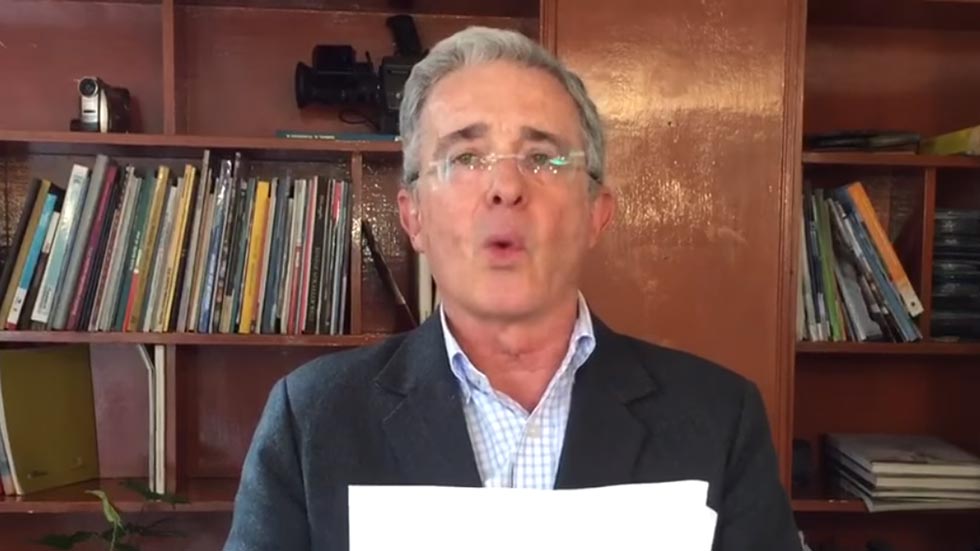 Colombia ex-President Alvaro Uribe on Wednesday formally presented his proposals and demands to amend a peace deal between the government and the FARC that was struck down in a referendum earlier this month.

The former president’s 26-page document contains proposed changed to all chapters of the peace deal, but mainly the transitional justice system that would not just seek justice for victims of the countless war crimes committed by the FARC, but also the mass violation of human rights committed by the state.

However, many of Uribe’s proposals are already in the agreement while others are considered so fundamentally different than the concessions negotiated over the past five years they are hardly likely to be even considered.

More controversially, rather than prosecuting all 24,4000 state agents and 12,500 private persons and enterprises convicted or accused of war-related crimes, Uribe wants the transitional tribunal to only prosecute alleged war criminals who voluntarily wish to cooperate with justice, with the exception of FARC members.

This proposal, however, would go directly against international law that demands all war crimes and crimes against humanity are investigated, not only if a suspected victimizer agrees to or because the suspect belonged to a specific party involved in the conflict.

Curiously, the former president proposed to include drug trafficking among the crimes that can not be pardoned, a proposal which effectively would undo the amnesty of many members of the FARC, which relied on drug trafficking to finance its war against the state for decades.

Uribe also proposed major changes in the peace deal’s chapter on rural reform that in its current form seeks the effective reduction of rural inequality and the return of stolen land to Colombia’s 7 million victims of forced displacement and forced abandonment of land through a land fund that should sitribute 3 million hectares of land among landless and displaced farmers.

In Colombia, less than 1% of the population owns more than half of the country’s national territory, partly caused by of the mass displacement of the rural population and the subsequent usurpation of their lands by large land owners, some of whom are accused of promoting the displacement.

According to the peace deal, the properties in the land fund should come from returning land that was stolen or obtained through intimidation mainly by paramilitary groups and then sold mainly to large land owners and businesses. Additionally, the deal seeks to seize private agricultural land property deemed neglected by large land owners and ranchers.

According to Uribe, the deal “should recognize the existence of large-scale commercial production, its importance within rural development and the national economy, and the state’s obligation to promote this.”

The former president also rejects the seizing of private, but neglected property for distribution among landless and displaced farmers.

Additionally, Uribe wants large land owners who bought stolen land “in good faith” to be allowed to keep this land.

The former president and his Democratic Center party also rejected the lowering of the threshold for becoming a formal political party. This deal was meant to promote the inclusion of minorities or parties with a regional focus, another primary cause of political violence in Colombia.

Uribe and his party will now negotiate these proposals with the government of President Juan Manuel Santos, whose administration bartered the peace deal.

Santos is also talking to other sectors in society, in particular evangelical Christians and business owners, after which an amended peace deal will be sent to Congress, which can then order the resumption of the suspended peace process.

Meanwhile, the prosecutor general has begun a criminal investigation into Uribe and his party for purposely spreading lies and disinformation in the campaign that ultimately led to the narrow win for the opponents of the peace deal in the referendum.