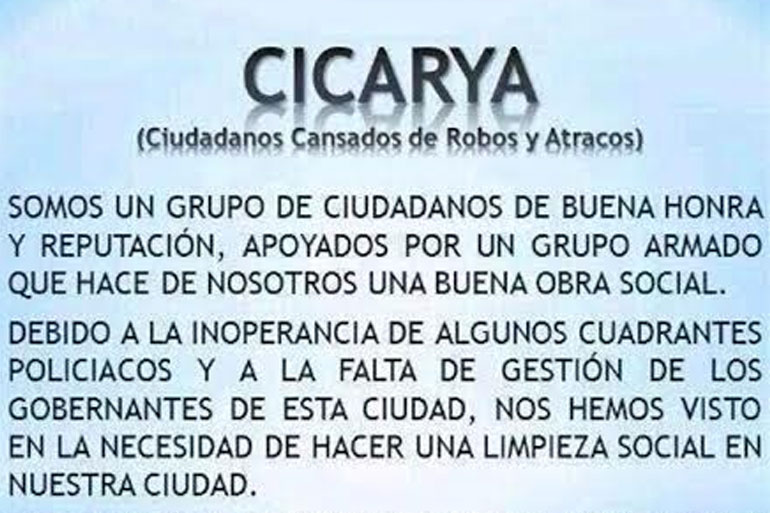 An unknown group purporting to stand for citizens’ justice distributed a flyer in social media platforms declaring its intentions to carry out “social cleansing” acts against criminals in Medellin, national media reported on Thursday.

The pamphlet, signed by an anonymous group calling itself “Citizens tired of Crime” (“Cicarya”), was posted in several social media platforms on Wednesday announcing ominous repercussions for theft and other crimes committed in Colombia’s second-largest city.

About two months ago, the neo-paramilitary group “Los Urabeños” distributed a similar flyer in one of the poor neighborhoods of Medellin, claiming responsibility for a 26% drop in homicides in 2013.

Security expert Heidy Gomez from the University of Antioquia told Colombia Reports that incidents like these are worrying, because so-called “justified acts of force on behalf of ‘good citizens'” is a subversion of democracy and the state’s jurisdiction over the use of deadly force.

“Furthermore, acts like this are promoting the proliferation of violence in a city where already violence is considered almost the only alternative for resolving conflicts, a condition that has negatively affected the development of Colombia’s society on the local and national level,” the security expert said.

The authors of the flyer claimed to be “citizens of honor and good reputation who are supported by an armed group,” as quoted in their pamphlet. They claim that they see themselves forced to carry out “social cleansing” in the city due to the “inactivity and mismanagement of police and city authorities.”

The group, whose stated mission is to “eradicate criminal activities in Medellin once and for all,” claims to already have killed two criminals apprehended prior to police action.

According to Caracaol Radio, Medellin’s Secretary of Security rejected the function of such groups, stating that this kind of aggressive self-defense philosophy leads to another kind of delinquency, and confirmed that city authorities and police would be investigating the case to determine the persons responsible for publishing the pamphlet.

The city’s former peace adviser, Luis Guillermo Pardo, attributed the development of armed extra-judicial defense groups in part to a “lack of public authority in the city and the rise of street crime and insecurity.”

The pamphlet’s rhetoric, he said, is reminiscent of the “paramilitary ideology that has already caused so many bad experiences in this city.”

“It is irresponsible that death should be answered with death, we have to respect the value of life! We are calling on the authorities and citizens alike, not to fall back on ‘private justive’ because it will end bad,” the former advisor was quoted as saying in the El Mundo newspaper Friday.

Medellin has a long and bloody history of social cleansing, carried out by illegal and semi-official armed groups from different political orientations.

The tactic was first employed by local so-called “self-defense groups” in Medellin’s crime-ridden poorer neighborhoods in the 1970s. Right-wing paramilitary organizations and left-wing militias later adopted the strategy throughout the armed conflict of the 1980s and 1990s as a means of filling a void in state authority and weeding out enemy factions and sympathizers.

Under the guise of ensuring public safety, urban social cleansing has been responsible for innumerable human rights violations and crimes on a massive scale, including displacement, rape and murder.