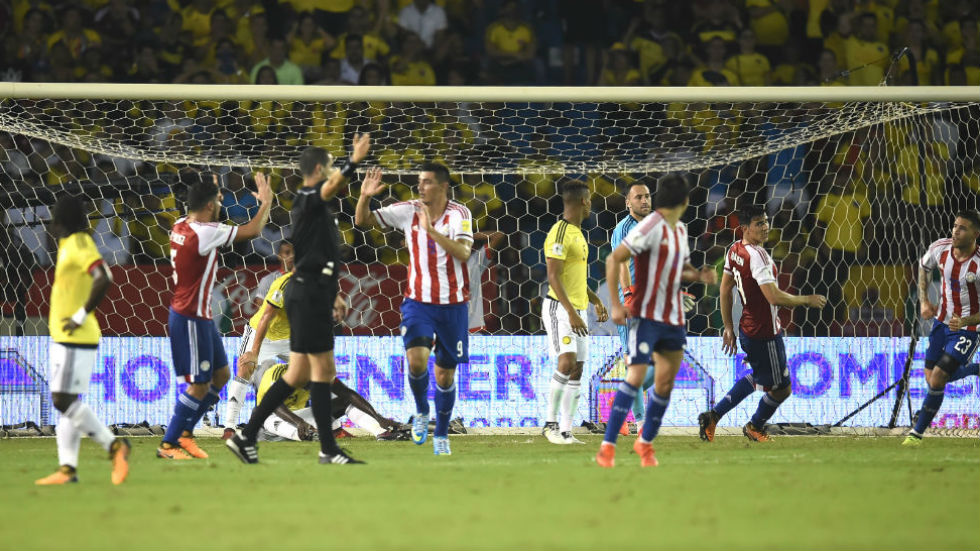 Two goals at the death saw Paraguay register a shock 2-1 win over Colombia in the penultimate game of World Cup qualifying in Barranquilla on Thursday.

A Radamel Falcao goal in the 79th minute looked to have secured automatic qualification to Russia 2018 for Jose Pekerman’s side but a late late show from Paraguay quenched the premature celebrations.

Goals from Oscar Cardozo and substitute Arnaldo Sanabria in the closing stages cancelled out Falcao’s opener to secure victory for the Paraguayans in the most dramatic fashion leaving Colombia with a must-win final game against Peru in Lima on Tuesday.

Colombia coach Jose Pekerman named the same starting XI that drew 1-1 with group leaders Brazil in the previous round for the decisive clash in the Metropolitano Roberto Melendez stadium.

It was the visitors Paraguay who made the more aggressive start reflecting their desperate need to secure all three points to keep their World Cup dream alive, imposing themselves physically throughout the field from the kick-off.

As Colombia failed to gain a foothold in the opening stages of the game, Paraguay went close to taking the lead in the 19th minute when striker Derlis Gonzalez hit the post from a Miguel Samudio cross.

In a tempestuous opening half hour, Colombia eventually responded in the 30th minute when Juventus star Juan Cuadrado broke down the right wing to square for Edwin Cardona. The Boca Juniors attacker composed himself in the box before seeing his close-range shot saved by Paraguay ‘keeper Antony Silva.

Cardona turned provider a minute later flashing a dangerous cross in from the left but Davinson Sanchez failed to secure sufficient contact to turn the ball into the Paraguay net.

The magnitude of the tie was evident in the basic errors made by both sides in a tense first half that yielded four yellow cards and failed to produce any real fluidity.

Colombia made a much brighter start to the second half and began an immediate onslaught on the Paraguay goal.

The home side almost went ahead in the first minute of the half as the industrious Cuadrado cut inside from the right and unleashed a thunderous left foot strike, only to be denied by a fantastic save from Silva in the Paraguay goal.

The Cerro Porteño stopper came to the rescue again a minute later when he kept out a powerful header from Colombian striker Radamel Falcao, following a James Rodriguez cross.

The introduction of Junior Barranquilla’s Yimmi Chara who replaced Edwin Cardona in the 75th minute saw the game spark into life.

The diminutive attacker had an immediate impact putting Falcao through on goal in the 79th minute. The Monaco ace lifted the ball over the advancing Silva to put Colombia almost within touching distance of qualification as the home crowd went wild.

As Pekerman’s side sought to see the result out, a mistake by goalkeeper David Ospina gifted Paraguay a lifeline in the 89th minute when substitute Cardozo slotted home following some confusion in the Colombian box.

Incredibly, as a subsequent Colombian attack broke down, with the last few minutes of play resembling the chaos of a 5-a-side, Paraguay struck on the counter attack with Real Betis striker Sanabria firing to the net to silence the home faithful.

The loss now means that Colombia slip down to fourth place in the CONMEBOL South American section of qualifying following Chile’s 2-1 win over Ecuador.

Just two points separate Colombia (26 points) in third from Paraguay in seventh with one game left to play.

With Brazil already qualified, three more automatic places remain up for grabs with the fifth place team facing an additional play off against New Zealand to secure passage to world football’s most prestigious competition.