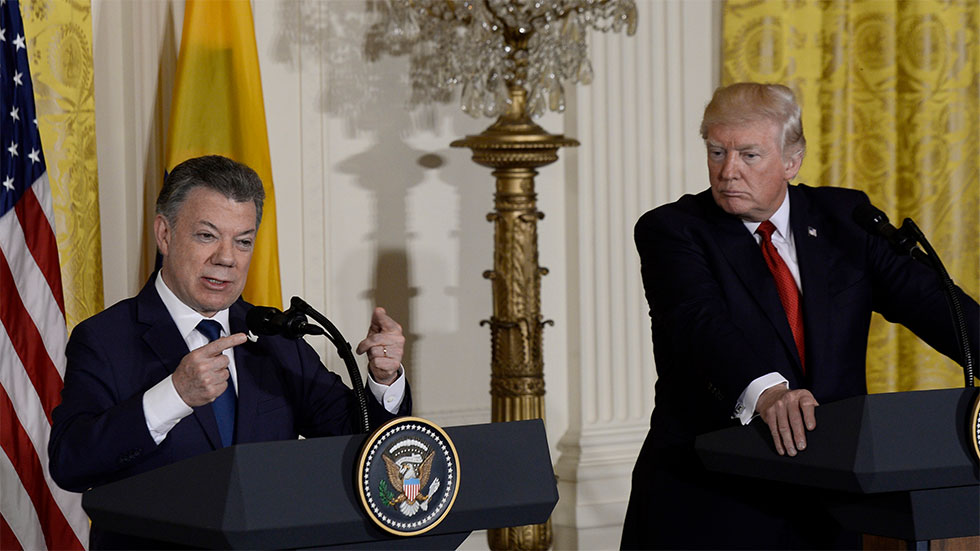 Colombia was never properly introduced to US President Donald Trump until Thursday. After it was, Trump had made such a fool of himself that he had lost control of one of the United States’ most important strategic allies in the region.

I’m still trying to grasp Trump’s epic blunder, so I will stick to my first impression as a foreigner, for now.

From a Colombian perspective, Trump’s speech was hilarious, incredibly stupid and profoundly offensive — the 30-minute rollercoaster ride of an apparent madman.

When twice(!) he referred to Colombian “cocoa,” the bean you make chocolate with, instead of coca, the base ingredient of cocaine, Trump displayed a stunning ignorance of what he was talking about, drug trafficking.

Trump made Colombia, a nation of 49 million, aware that the president of the United States of America has absolutely n.o.  f.u.c.k.i.n.g.  i.d.e.a.  what he is doing.

Colombian President Juan Manuel Santos took advantage and made it clear he knows exactly what he’s doing. He took the US president for a spin.

With his incoherence and ignorance alone, Trump had already made it clear that the current president of the United States knows more about tacky interior design than drug trafficking or international politics.

However, when he claimed that the ongoing violence in Venezuela was the worst seen in decades — standing right next to the president of Colombia, the country that lost at least 265,000 of its people in war over the past decades — his ignorance effectively made him the biggest asshole in the two countries’ bilateral history.

Venezuela has a very, very serious problem.  We haven’t really seen a problem like that, I would say, Mr. President, in decades, in terms of the kind of violence that we’re witnessing.

Negating the existence of 8 million war victims in the face of their country’s president is not just stupid, it’s despicable. It’s how you revictimize people. No human being with half a brain would even consider doing such a thing.

In his petty attempt to advance a political talking point, he made himself look like an utter imbecile in front of the entire world.

Santos is not an amateur, he maintained his posture, and simply took Trump for a diplomatic ride.

The Colombian president made it clear that the US government will continue to effectively and actively support the Colombian peace process, but had been taken off the steering wheel and placed in the backseat.

Today we continue as partners in Peace Colombia to consolidate peace in the most affected areas. With the solid support of your government we are removing thousands of anti-personnel mines that have killed and maimed children, women and soldiers. We are healing the wounds of the victims and are embarking on a major social development program. As we discussed today, we are working with your administration to take advantage of the unique opportunity given by peace to permanently reduce coca cultivation in Colombia and more effectively combat the other stages of drug trafficking, including consumption.

Little Trump getting played by the big boys

Love him or hate him, Santos is a professional, and a dynasty politician who has spent his entire life preparing to play politics at the highest levels. He lacks the appeal Trump has, but he knows how to get what he wants. The guy got elected and reelected and now even walks around with a Nobel Peace Prize.

Trump was simply no match for the Colombian president. He became Santos’ tool, a mere sidekick.

The US president had gone out of his way not to endorse Colombia’s peace process or strengthen Santos, yet he ended up doing exactly that, in a matter of minutes.

The purpose of his entire speech was shred to pieces after the first question from the White House press corps.

Well, it’s been a long process, and it’s been a great thing to watch in the sense that the President did a fantastic job. That’s not easy after so many years of war. So I’m very, very proud to get to know you, and I really congratulate you. There’s nothing tougher than peace, and we want to make peace all over the world. And you are really a great example of somebody that started it.

When reporters asked Santos about Trump’s plans to curb drug trafficking by building a wall on the Mexican border, Santos took the opportunity to announce that the US-led War on Drugs was over, and Colombia was going its own way.

I believe that the best way to fight the drug trafficking is by collaborating. This is not a problem of Colombia only or a problem of the United States only. It’s a world problem. And we have to all work together. We declared the war on drugs 40 years ago. The world declared the war on drugs. And it’s a war that has not been won. So we must be more effective and more efficient.

Santos has received explicit and/or financial support from the European Union, the United Nations, the pope, the World Bank and every single country in the hemisphere, including the United States. So, when asked about Trump’s unilateral wall-building plans, he bashed them in minutes.

We will work together, the U.S. and Colombia, with other countries — Central America — to fight the other links of the chain, the intermediaries. We have destroyed 22,000 laboratories in the Colombian jungles, seizing cocaine in transit. We have seized record amount of tons last year, and this year we’re doing even better than last year. So by working together we can be much more effective, and that is the commitment we just made or ratified this afternoon.

And that was a long and very diplomatic answer to your question. I will say it a little bit shorter:  Walls work. Just ask Israel. They work. Believe me, they work.

While the United States president made a complete fool of himself before a global audience, Santos’ ability to play Trump strengthened his position both at home and on the international stage.

Trump went out of his way not to endorse Colombia’s peace process or strengthen Santos, and failed gloriously.

Colombian newspapers on Friday published nothing but headlines highlighting how Trump had supported the peace process and how the US president praised Santos.

Additionally, the US president has further weakened America’s influence in the region while boosting Santos as a regional power broker.

Norway and the European Union are now the most influential foreign powers in Colombia, not the United States.

In regards to drug trafficking, Trump has made it clear he has no policy, which is probably a good thing considering the counterproductive results of previous US administrations.

50 years of US intervention in Colombia

Americans in Colombia left in the cold

What worries me are the consequences of Trump’s idiocy for the tens of thousands of Americans living in Colombia, many of whom are either friends or readers of my website.

Trump fired all ambassadors the day he took office, but forgot to replace Ambassador Kevin Whitaker, a top-quality diplomat. Consequently, while the Colombian government is taking the lead in fighting drug trafficking, the US ambassador is left without authority, an American ornament.

This leaves American immigrants without adequate state support exactly when they need it most. Trump has personally reversed Colombians’ perception of the United States from positive to negative. This makes Colombia less safe for Americans, especially for Trump supporters.

Between June of last year and last month, positive public perception of the United States dropped from 70% to 42% in Colombia. At the same time, negative perception increased from 21% to 49%, according to Gallup Colombia.

Thanks to Trump, American citizens are likely to hear a lot more of the hostile “gringo hijueputa” (fucking gringo) instead of the friendly “mono” (blond guy).

Supporters of the US president must be warned that if they hold up a Trump sign or defend him in public, they could end up in the hospital. Hooligans are everywhere. Trump’s insults have been received loud and clear, and anti-American sentiments in Colombia are increasing as a consequence.