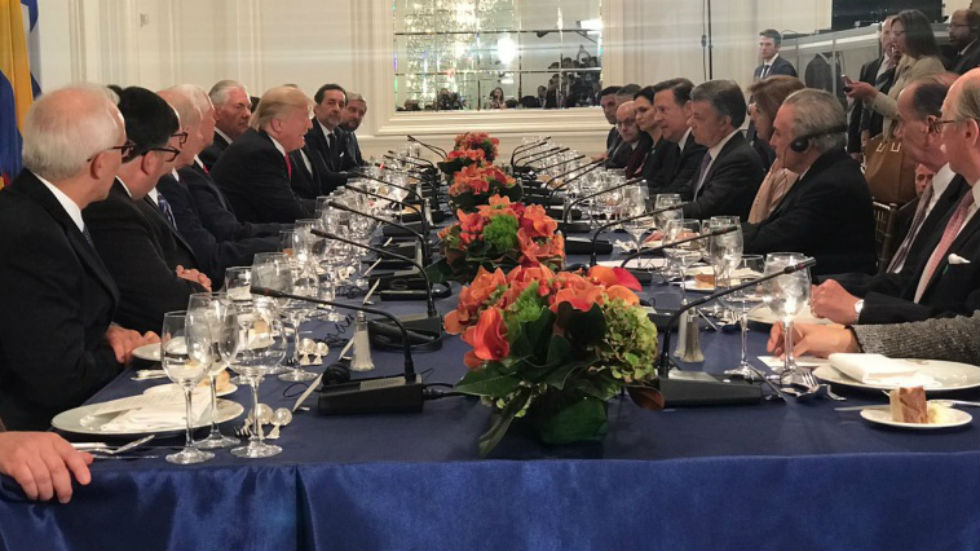 Santos met with Trump and other Latin American leaders at a special dinner on the fringes of the UN General assembly in New York to discuss what the US leader described as a “completely unacceptable” situation in Venezuela under Nicolas Maduro’s leadership.

In order to curb political opposition, the Venezuelan head of state disbanded the National Assembly, giving his party virtual absolute control over the state, a move condemned by neighbors and the US.

Santos calls on international community to step up pressure on Venezuela

Trump did not mention military intervention as he had done recently but rather reiterated the view expressed by the Colombian leader that a unified, collective approach is needed to bring about a democratic regime in Venezuela.

“I urge every country here to prepare to do more to address this incredible and serious crisis. We call for the restoration of democracy and all civil rights in Venezuela and we want it to happen soon,” said Trump.

“We are prepared to take further action if the government of Venezuela persists on the path to imposing authoritarian rule on the Venezuelan people,” said Trump.

“As responsible neighbors and friends of the Venezuelan people, our goal must be to help them regain their freedom, recover their country, and restore their democracy,” he added.

Colombia’s head of state emphasized before the meeting that any suggestion of military intervention by Trump would not be entertained by Latin leaders, who have consistently called for diplomatic pressure.

“We have told him that military intervention is something that is not on the agenda in any of the countries of Latin America, that would only make it worse,” said Santos to the Bloomberg agency.

“What we all want is for Venezuela to become a democracy again and we are exerting all possible pressure to make it happen again,” he added.

Brazilian President Temer agreed that, along with the US, Latin America’s political leaders must try resolve the Venezuelan crisis through diplomacy.

“Evidently, everyone at the table wants a democratic solution in Venezuela, but no one wants a foreign intervention,” Temer said to reporters after the meeting.

The crisis in Venezuela has already spurred the migration of hundreds of thousands of Colombians living in the neighboring country and Venezuelans fleeing food shortages and violence.