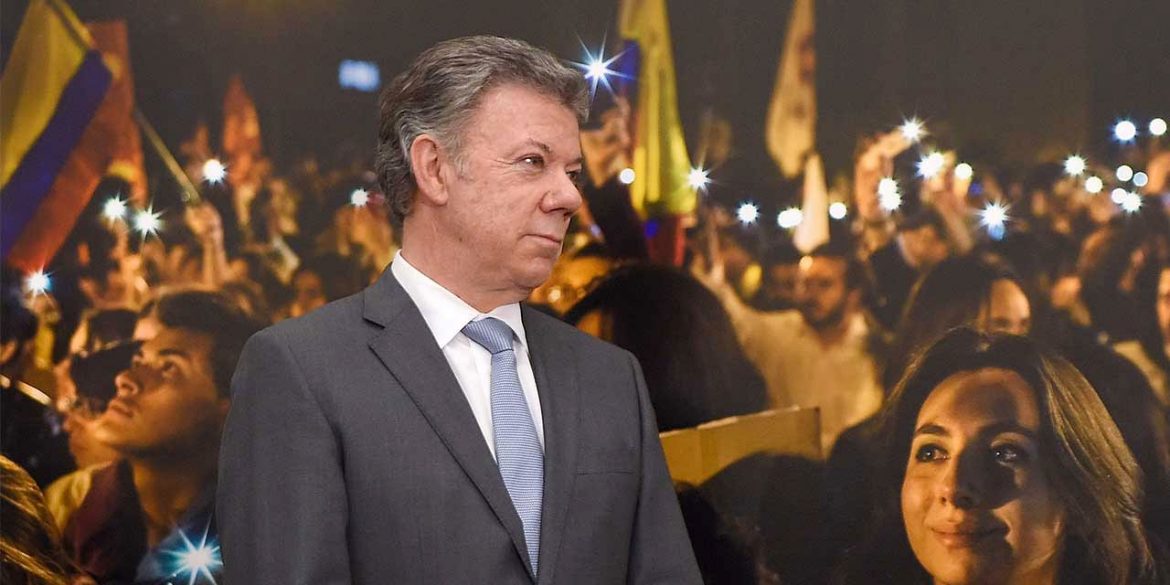 ‘They haven’t been able to’ sabotage Colombia’s peace process. ‘And they won’t be’: Santos

Colombia’s former President Juan Manuel Santos said Saturday he was confident that the peace process he agreed with FARC guerrillas and victims in 2016 will prevail, despite attempts to sabotage it.

In a column in Spanish newspaper El Pais, the Nobel Peace Prize laureate maintained his optimism about the peace process, despite major failures and ongoing resistance by his predecessor, for who he had some political advice.

“No one said it would be easy or that Colombia would be a paradise the day after signing the peace. Quite the opposite. It was warned that the road would be long and protracted,” said Santos.

The former president also said that sabotage attempts had been anticipated, particularly from the extremist and criminal elements in society.

A war of more than fifty years, struck by the poisonous arrow of drug trafficking, generates all kinds of macabre interests that benefit from violence and disorder. And, of course, the political interests that feed on fear and war are not interested in normality either. They need enemies. That is why they did everything possible to make peace fail and many continue to try to sabotage it. Fortunately they have not been able to… nor will they be able to.

Santos discarded the disinformation campaign by the far-right party of his successor, Ivan Duque, as “stupidities” and contradicted the president that drug traffickers would be behind the killing of human rights defenders and community leaders.

The former president pointed his finger directly at the country’s large landowners. Some rural elites dispossessed land the size of Belgium from displaced farmers and are either violently trying to prevent land restitution or through Duque’s Democratic Center party.

The landowners who seized land by displacing peasants at gunpoint do not want their plots to be returned to the original owners. That is why they are proposing in Congress that restitution be stopped. And the drug traffickers don’t want the voluntary substitution of coca crops to succeed because they know it’s the most effective, perhaps the only way to wipe out their raw material.

With his familiar smugness, Santos belittled the attempts of his predecessor and Duque’s political patron, former President Alvaro Uribe, to discredit him and the peace process, stressing that the courts, Congress and the international community have so far successfully safeguarded progress.

Murdering the reputation and credibility of your enemies has commonly been a tactic used by the far right. That’s why our slogan has been clear: as long as the dogs bark, you have to keep riding.

“The peace train cannot be stopped, it has passed the point of no return and attempts to derail it will fail. The hope of the people will end up defeating fear,” said Santos. “reconciliation, as difficult as it may be, will end up prevailing over hatred.”

Santos said that Duque, whose party has fiercely opposed the peace process, “has a golden opportunity to regain his prematurely lost governability: putting peace over partisanship and to lead its construction, that necessary second phase.”

If he commits himself to effective action to stop the assassinations of social leaders, if he stops insisting on changing agreements and translates this into concrete and measurable actions, backed by the necessary resources, his repeated manifestations of wanting to implement what has been agreed would be supported by the great majority of the country and Congress.

The former president went even further, explaining his former pupil how politics works. According to Santos, Duque’s resistance to the peace process was weakening his “centrifugal force” that would allow him to obtain congressional and judicial support.

“Everything has a solution, everything can be achieved,” said Santos, “if you leave peace in peace.”