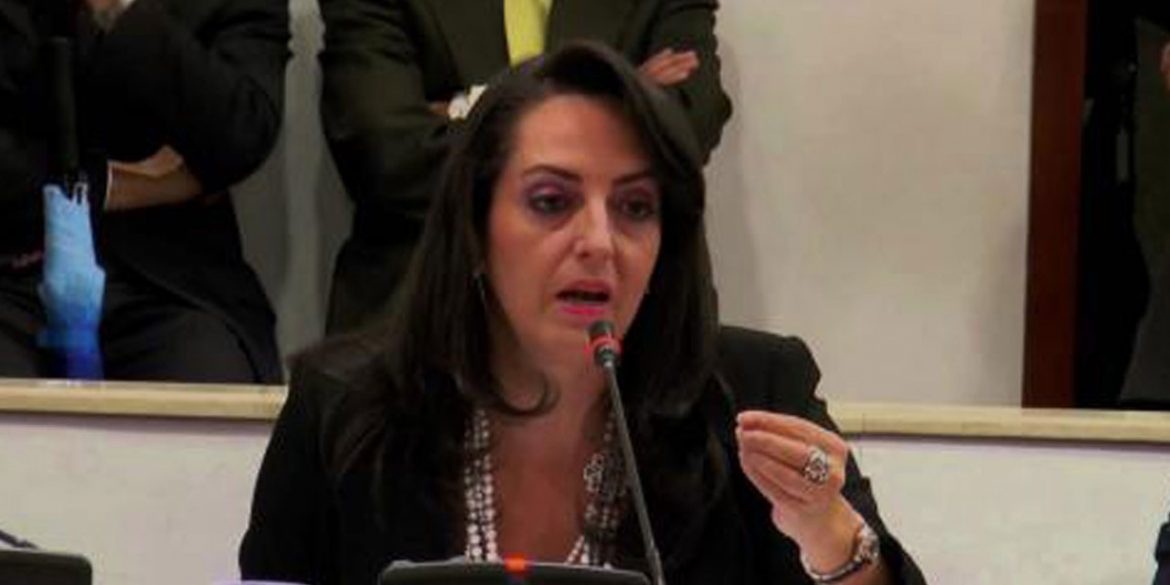 Maria Fernanda Cabal is arguably the most radical ally of former President Alvaro Uribe. Her political career has been marred by corruption, nepotism, and her aggressive attitude to critics.

The far-right politician was elected into the highest chamber of Colombia’s congress last year partly due to election fraud, the latest of many corruption scandals for which she was never investigated.

Cabal was born into a wealthy family of sugar plantation owners in the southwestern Valle del Cauca province, and has never shied away from using corruption, nepotism and violence to maintain and expand her family’s wealth and political power.

The senator studied political science at Los Andes, an elite university in Bogota. After her study, she moved to the United States where she got a job at the Kettering Foundation. She later founded Student Travel Center, a tourism agency for wealthy Colombians.

She entered Colombia’s national system of power in 2006 when former Prosecutor General Mario Iguaran appointed her international affair chief, but was forced to leave a year later after her office leaked confidential information to the Defense Ministry about the pending indictment of 69 members of a paramilitary death squad that, together with the military, committed a massacre in San Jose de Apartado, a town in northwest Colombia, in 2005.

The defense ministry was interested in this information, because more than 80 members of the military were implicated in the massacre in which eight people, including three children were murdered.

After she got kicked out of the prosecution, her husband, ranchers federation Fedegan boss Jose Felix Lafaurie, let her run the foundation to compensate victims of Fedegan that had financed the paramilitary group that committed the San Jose de Apartado massacre and many others.

A year later, the Cabal family and their neighbors sought the help of the government of then-president Alvaro Uribe to end a strike at the family’s Pichichi plantation. Uribe sent in the security forces that brutally ended the strike. The violent repression left 31 workers injured and others falsely accused of being FARC guerrillas. Three journalists who were trying to cover the strike were arrested and expelled from Colombia.

In 2009, the Cabal family company was disgraced when media found out that Pichichi had obtained grants meant for small farmers. Former agriculture minister Andres Felipe Arias, a.k.a. “Little Uribe,” was sentenced to 17 years in prison for using the so-called Agro Ingreso Seguro fund as a sort of piñata for wealthy families and even demobilized paramilitary warlords who could financially support his 2010 presidential bid.

Instead of Arias, Uribe implicitly endorsed former President Juan Manuel Santos who began peace talks with the FARC, the sworn enemy of Uribe, Cabal and other large landowners. Cabal joined Uribe’s far-right Democratic Center party that sought to sabotage the peace talks, particularly after Santos and the FARC came to an agreement on a war crimes tribunal that would investigate the crimes by the FARC, and large landowners like the Cabal and Uribe families.

In 2013, Cabal became the leader of the CD’s bench in the Bogota city council from where she opposed leftist Mayor Gustavo Petro, who had exposed the ties between Uribe’s allies and the paramilitaries almost a decade before.

A year later she entered the House of Representatives where she quickly became infamous for her extreme views and aggressive attitude towards political opponents. Because her party used a “closed list,” Cabal did not have to campaign for her seat.

While Cabal was making career in politics, her family’s company had a major setback when Pichichi and 14 other sugar producers were convicted for price fixing through their illegal business cartel and fined more than 96 million in 2015.

But that didn’t stop Cabal. In 2018, when Uribe decided that CD candidates had to go on campaign to earn their seat in congress, Cabal decided to run for the Senate.

Cabal was able to enter the higher house of Congress partly due to voter fraud, according to the prosecution. Two Bogota city officials are currently in jail because they allegedly threatened school teachers they would lose their jobs if they didn’t successfully convince at least 10 family members to vote for Cabal.

But Uribe’s bet that his party enjoyed public support proved to be an error and the CD lost seats in Congress as many other candidates lacked public support or weren’t able to buy or extort enough votes.

Having entered the highest chamber of Congress, the senator almost immediately filed a motion to amend the Victims and Land Restitution Law that would make it virtually impossible for victims of displacement to seek the restitution of land that had been stolen or dispossessed by large landowners like her family in collusion with the paramilitary groups her husband’s federation had helped found together with drug traffickers.

An attempt to make her husband the country’s comptroller general failed, unfortunately for Cabal and Lafaurie.

Nevertheless, she did successfully secure the return of a $300 million government fund to Fedegan that had been removed because of the ranchers federation’s corruption and mismanagement.

However, the comptroller general who was appointed instead of Cabal’s husband is currently investigating possible irregularities in the agriculture ministry’s granting of this fund to Lafaurie despite the mismanagement of funds established by his predecessor.

Cabal became internationally famous in May 2019 when she successfully launched a disinformation campaign in which she implied that the New York Times’ bureau chief and photographer were supporters of the FARC.