Multiple illegal armed groups on the border between Venezuela and Colombia could turn diplomatic tensions between the two countries into armed conflict.

Discussions of a conflict involving just Venezuelan, Colombian, and US military forces are drastically oversimplified, as they appear to ignore the unhinged armed groups operating in the area.

These groups have the military power to disrupt any organized attempt to resolve the situation in Venezuela through Colombian and/or US intervention.

Colectivos in Venezuela can vaguely refer to community groups with a shared purpose, such as organizing neighborhood social events, but the term has come to be more closely associated with armed groups organized to support the so-called “Bolivarian Revolution” of late President Hugo Chavez and the PSUV party of Nicolas Maduro.

The colectivos began as neighborhood militias that were supported by Chavez and helped carry out government policy and social programs, but were also trained and armed by the government to defend the revolution if necessary.

Many of these groups organized into powerful paramilitary groups that have clashed with the security forces that once trained them. They often combine political and criminal activities, levy “taxes” on businesses and criminal organizations operating in their territory, while still receiving government funding.

Human Rights Watch has reported that government security forces have allowed these militias to attack protesters and journalists, and at times openly collaborated with them.

Colectivo “Tupamaro” runs its own political parties, is amply funded by the government and forms a significant force near the Colombian border. The group is one of the oldest and most powerful in Venezuela. Tupamaro is closely linked to former Caracas Mayor Juan Barreto, according to an according to the International Crisis Group. When Barreto was mayor, some 7000 members of this colectivo were on the municipal payroll, including top members of the police force and the deputy director of public safety.

Tupamaro is currently involved in a turf war in the border state of Tachira. In 2016, Tupamaros deputy Cesar Vera was gunned down outside a corner store in state capital Tachira, allegedly by a Venezuelan member of Colombian paramilitary group AGC.

There are many more colectivos operating in the area, but reliable intelligence information is lacking because of the dangers of working in the border region. An unidentified colectivo recently attacked and robbed a Swiss freelance journalist who was en route to cover the aid standoff at the border.

Vice News spoke to masked colectivo members on the border, reporting that there were 300 active members monitoring the border near Cucuta. One interviewed member said they were trained for combat by the government and willing to fight to the death because they believe they will be persecuted under a new government.

Last year, Maduro announced a campaign to increase the Bolivarian Militia to 1.6 million and made multiple pledges to provide each member with a gun. This nationwide militia is considered the reservist force of the military.

Juan Gonzalez, a senior fellow at the Penne Biden Center and former national security official in the Obama administration told the Miami Herald that while the world is focused on what soldiers are doing, the actions of the militias and the colectivos are the real wild card at the border.

You have the colectivos and the Bolivarian militia, which some people estimate is 1.7 million civilians. Those groups are not trained … and all it takes is one person to fire a shot.

The “Cartel the Suns,” refers to loosely associated factions within Venezuela’s armed forces that traffic drugs, people and other contraband across the border. According to the US government, they have collaborated with the FARC in the past, trading cocaine for weapons.

The term does not refer to a cartel in the traditional sense- the Cartel of the Suns is amorphous and loosely organized. These groups are well armed and trained and also fiercely loyal to Maduro.

The ELN is Colombia’s last standing guerrilla group and have operated extensively in both Colombia and Venezuela for decades.

An investigation by trans-national crime website InSight Crime discovered ELN activity in more than 12 Venezuelan states, where the group allegedly engages in a wide range of criminal activities to fund their armed uprising against the Colombian government. They have also moved in to fill the power vacuum left by the FARC in many of the border zones where national authorities are traditionally weak.

According to Bram Ebus, an investigator of the International Crisis Group, the ELN now controls drug trafficking corridors from Colombia across Venezuela, and into Guayana.  The guerrillas have also taken control of illegal mining operations, allegedly run in collusion with the military, in the southern part of the country that were previously controlled by Venezuelan gangs.

“Now it is not so so much that they use Venezuela only to rest. They are basing a big part of their operation there. It is difficult to see them as a solely a Colombian group when a large part of their troops are in Venezuela,” Ebus said.

Former ELN commander Carlos Velandia said in October last year that 70% of the ELN had for more than 40 years operated in both Venezuela and Colombia, and would join in a civil war on the side of the “Bolivarian revolution.”

EXCLUSIVE MIRA-VCúcuta, COLOMBIA. February 28, 2019. – A sub-officer of the Venezuelan army who defected a few days…

More than 700 members of the Venezuelan military have jumped the border over the past month, of whom some have told press that they are organized and willing to take up arms to support opposition leader Juan Guaido’s bid to oust Maduro.

A plan to use 200 exiled soldiers against the Venezuelan national guard that was preventing aid from entering the country was stopped by the Colombian government at the last minute, Bloomberg reported earlier this month.  The plan was reportedly led by retired General Cliver Acala.

The United States’ special envoy to Venezuela, Elliot Abrams, was a key player in a similar covert ploy to overthrow the elected government of Nicaragua by using similar dissident military forces in the 1980s.

The US-backed contras were responsible for the mass assassination of civilians, massacres and torture.

Colombia’s FARC guerrilla group FARC demobilized in 2017, but FARC dissidents maintain a significant presence in the border region, particularly in the south where the dissident “Southwestern Block” refused to demobilize, and retained their arms and military structure.

According to the International Crisis Group, these dissident FARC guerrillas taken over mining operations in the south of Venezuela, and is now trafficking gold, cocaine and arms between the two countries.

The FARC’s 33rd and 10th Fronts initially took part in the peace process, but abandoned it, citing government non-compliance. They have since tried to retake control over the border region, respectively in Norte de Santander and Arauca.

Social media reports also show armed groups that appear to be from Medellin planning to charge across the border and “heat things up.” The group’s leader is using military gestures and jargon.

It is unclear why these presumed members of the Oficina de Envigado have shown up at the border. 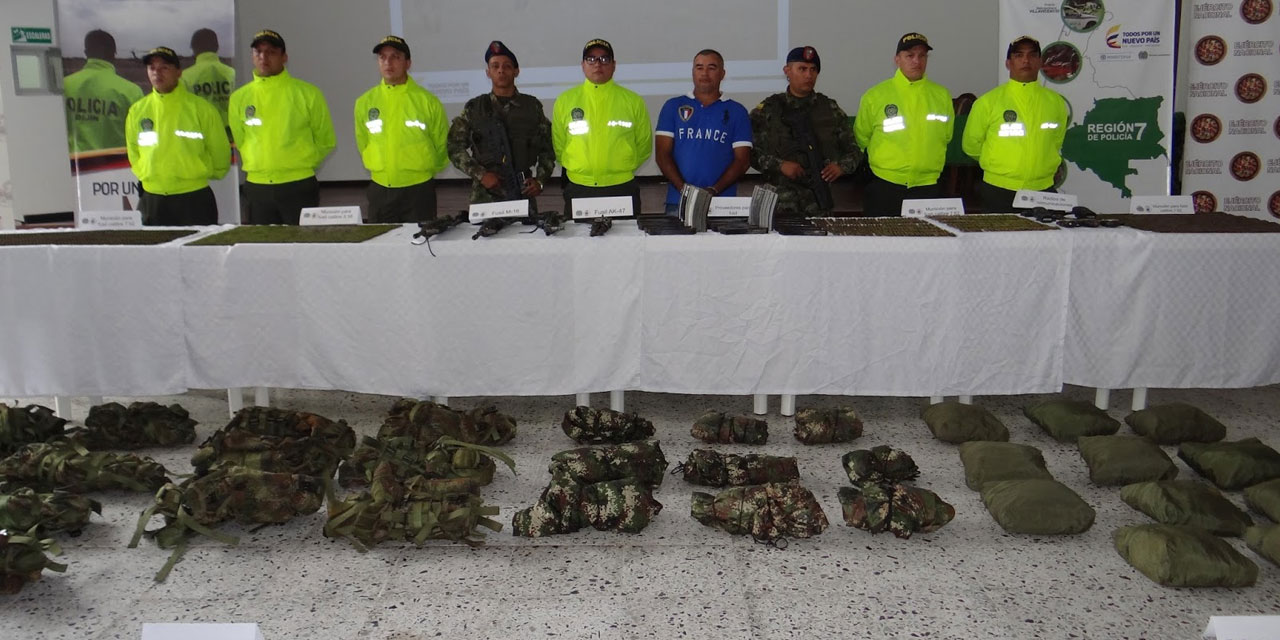 The Libertadores are an associate of the AGC, the group that allegedly killed a Tupamaro leader last year, but they are unlikely to engage in any military activity unless their economic interests are threatened.

The group gained prominence in 1992 when they attacked government officials considered corrupt. Their main source of funding is kidnapping and extortion. They have occasionally come into conflict with Colombian guerrilla groups who also operate in the border area.