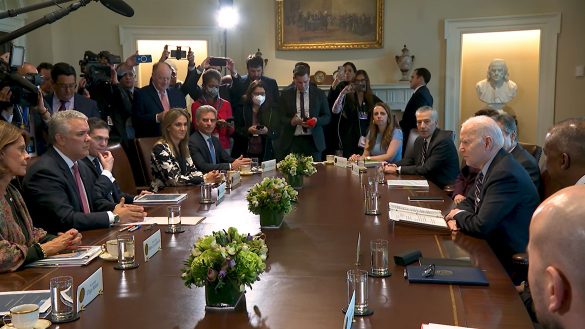 The diplomatic smokescreen between the US and Colombia

The diplomatic and bilateral cooperation strategies between the United States and Colombia have been re-evaluated.

For some time now, the administration of President Ivan Duque has had worsening relations with the US government; in fact, former Ambassador, Francisco Santos, admits in an interview with Blu Radio that the explicit support of the President’s political party for Donald Trump’s candidacy caused damage to relations between President Joe Biden and President Iván Duque (BluRadio, 2021).

The media hype around the Colombian president’s visit to the White House was just one last effort to cover-up the diplomatic mismanagement with the US. In fact, Duque’s administration has leveraged the media coverage to misinform Colombian citizens about what is really contemplated in the Congress of that country for the future of relations with Colombia.

So much so that on Tuesday, March 15, Ambassador Juan Carlos Pinzon tweeted about his alleged impact on the appropriations law approved by the US Congress for fiscal year 2022. The Colombian ambassador said that his lobby convinced legislators to “exclude harmful propositions against the Colombian Armed Forces.”

Likewise, several Colombian media outlets such as Portafolio, Semana, BluRadio and Canal Uno used this tweet along with an interview given by Pinzon to imply that there are no reprisals for the Armed Forces that violate human rights.

These media outlets also report that the amendments considered by US congressmen such as Alexandria Ocasio-Cortez and Jim McGovern were eliminated from the final text of the budget.

Among these eliminated amendments include freezing support for ESMAD (SWAT-like police forces), the mention of the Colombian military involved in the recent assassination of the Haitian President, and provisions that sought to increase the withholding of funds in cases of human rights violations.

“HR 2471 – U.S. Appropriations Act 2022” is the official title of the national budget approved by the US Congress and signed by President Biden. Among the 1,068 pages of fiscal stipulations, less than two pages summarize the financing of operations in Colombia.

This section appropriates $471,375,000 in foreign operations composed of both military and development aid.

It also establishes the terms of the certification and retention of funds regarding support in the fight against drugs and military cooperation directed to the public force. Colombian.

Contrary to what the ambassador and the national press report, the Appropriations Law does refer to ESMAD, albeit indirectly. It stipulates a new process of certification and retention of funds to ensure that “Colombia is bringing to justice the police personnel who ordered, directed and used excessive force and participated in other illegal acts against protesters in 2020 and 2021” (HR2471, 2022, p. 609, ToA).

In addition to this, the US Ambassador Phillip Goldberg, upon receiving questions about Pinzon’s pronouncements, Biden’s national budget and the amendments to freeze ESMAD funding, replied that “it is true that they were removed from the legislation but it does not mean that we are going to direct money to the ESMAD or to other Police agencies”.

Defense Minister Diego Molano later replied and contradicted Goldberg’s statements, affirming that the funds for the ESMAD can be used because the amendments that prohibited it were removed (WRadio, 2022).

Perhaps Duque and his public servants have put up these smokescreens to cover up the fact that soon they will no longer be part of the conversation with the US.

Or maybe they want to hide the little impact they have had on the new bill entitled “US-Colombia Strategic Alliance”, which was submitted by Senators Bob Menendez (NJ) and Tim Kaine (MN) on Thursday, March 9. Among other things, the proposal stipulates a period of 180 days to establish a consultative committee with the Government of Colombia that will guide the new strategic alliance, just enough time to avoid having to deal with the current president and his ambassadors.

As part of this last section, the position of High Humanitarian Coordinator is created to demonstrate the strong commitment to the guarantee of human rights and the implementation of the peace agreements by the U.S. Government.

To top it off, one of the proposals regarding regional security by Menendez and Kaine is precisely to establish a report on malicious activities such as disinformation and interference in public elections, both practices of the Duque administration.

While Pinzon and Molano have taken care of the first activity, Senator Maria Fernanda Cabal and Representative Juan David Velez took care of the second when they openly showed preference for the Donald Trump presidential campaign.

The latest moves by Biden and the United States Congress regarding the financing of operations in Colombia and the Bill that is now being negotiated between the Democrats and the Republicans, there is no doubt that the next government of Colombia and its corresponding legislature will have a great opportunity to reformulate the old doctrine of respice polum, in other words, that of always following the dictates of Washington DC.

After what the Konrad-Adenauer-Stiftung Foundation (KAS, 2022, p. 198) has called a detriment to the perception of state independence caused by the foreign policy of President Duque, the next president of Colombia will have the opportunity to return to position the country as an sovereign and autonomous power, close to the United States as well as to other global powers such as China or Russia.

Observing the results of the legislative elections and the consultations of the presidential coalitions, it is evident that the geopolitical future of the country is in the hands of either Senator Gustavo Petro, former Governor Sergio Fajardo or former Mayor Federico Gutierrez.

On August 7, one of these men will begin to define the future of Colombia on the international scene, whether as a peripheral actor and dependent the Washington Consensus, or on the other hand, as a sovereign and independent state, a leader in public innovation, democratic governance and sustainable development.

It is important to highlight that these issues have been largely absent from the electoral debates and an initiative, like the one four years ago , when a group of Colombian students in New York City dared to organize the first presidential debate abroad, is very much needed.

That night, candidates Duque, Petro and De la Calle had to answer important questions for the diaspora and the international community.

There are still five weeks left for citizens, the media and the academy to realize the gap in the debate questions about international affairs in the electoral campaign.

So far, they have been asked about the future of the pension system, about the expropriation of land, about the alliances of the traditional political houses, about their personal lives, but there has not been a single debate about one of the most important functions that that one of them will exercise when they arrive to the House of Nariño, that of Diplomat in Chief, the face of Colombia before the world.

In the last weeks of the electoral contest, who dares again to propose questions about Colombia in the world, important questions for the diaspora and for the international community?

The author is a consultant, translator and activist. He has worked in the Embassies of the United States and Ecuador in Bogotá, both in cultural and human rights areas as well as in national security and military diplomacy. He has also worked as an international relations professional in the Mayor’s Office of Bogotá and later in the ACI Medellin. He is currently studying a doctorate in humanities at the EAFIT University.