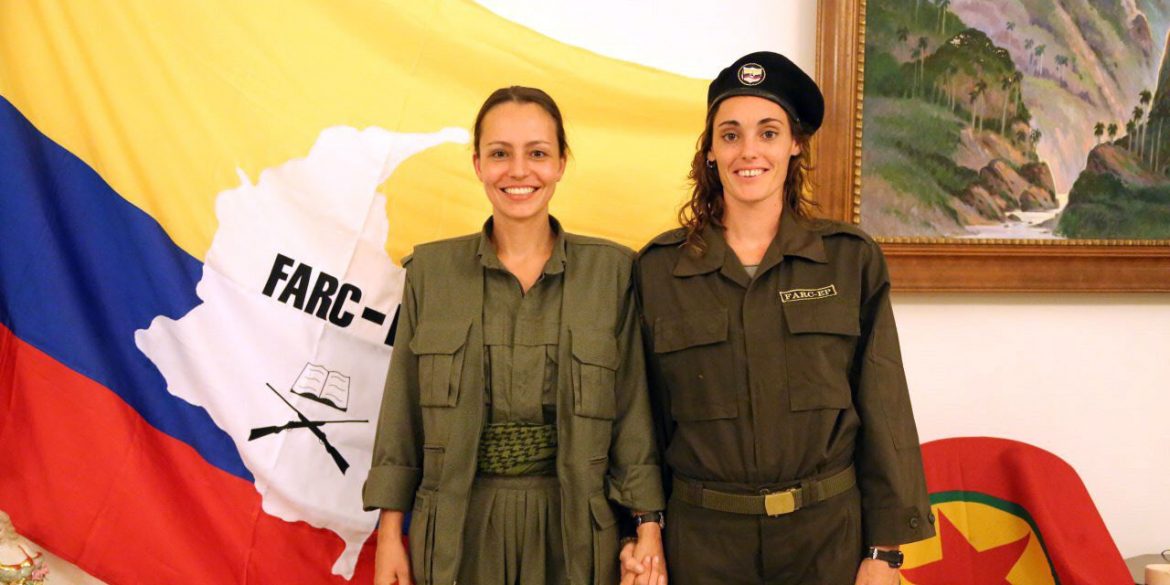 Tanja Nijmeijer is a Dutch member of the FARC, the political party she joined in 2002 when they were still a guerrilla group.

Born on February 3, 1978, Nijmeijer began her life in the small Dutch town of Denekamp.

Upon finishing high school, Nijmeijer enrolled at the University of Groningen, one of the oldest and most prestigious universities in the Netherlands, where she studied Romance languages and cultures.

Nijmeijer made her first trip to Colombia in 1998. Leaving her close-knit family in Holland, the 20-year old responded to an ad in her university newspaper to teach English in Pereira, a city in Colombia’s coffee region.

The daughter of a middle class civil servant, Nijmeijer was apparently shocked at Colombia’s extreme inequality and high levels of violence.

When she returned home a year later, Nijmeijer began taking a strong interest in left-wing social activism. She was consumed by the “fever of the revolution,” according to filmmaker and writer Jorge Enrique Botero who interviewed her on several occasions.

“I said to myself, the world can’t be this way — something’s got to change,” she recalled in one of the interviews with Botero.

In late 2002, Nijmeijer voluntarily joined guerrilla group FARC and gained the code-name “Alexandra”. Years later, Nijmeijer’s mother, Hannie, claimed that her daughter’s decision to become a guerrilla was due to her “deep social conscience.”

Soon after joining the guerrillas, Nijmeijer began a romantic relationship with the nephew of the FARC’s military commander, Victor Julio Suarez Rojas, alias “Mono Jojoy.” Nijmeijer is believed to have served as personal assistant to Mono Jojoy until he was killed in a 2010 government raid on his hideout.

The Dutch woman gained the attention of the international media in 2007 when her diary was found in a rebel camp. In it she wrote of her frustrations with the FARC lifestyle. “One lives here more or less like a prisoner. This would be worth it if I knew I was fighting for something but I don’t really believe in this anymore,” she said.

Nijmeijer later claimed her words were taken out of context, insisting that she would be with the guerrillas until “victory or death.”

In 2010, the rebel’s younger sister, Marloes Nijmeijer, journeyed to Colombia in an attempt to find her sibling. According to reports at the time, Marloes regarded FARC as an, “illegal group that kills innocent and does not want peace.”

According to a 2011 book by Botero titled “La Vida No Es Facil, Papi” (Life Is Not Easy, Dad), Nijmeijer was complicit in several violent crimes on behalf of FARC.

In 2010, Nijmeijer was indicted by a U.S. court on charges of conspiracy and kidnapping for her alleged role in capturing and detaining three Americans in the Colombian jungle. If convicted, Nijmeijer could face up to 60 years in jail.

On August 27, 2012, Colombian President Juan Manuel confirmed his government had agreed to talk to FARC and seek a negotiated end to the country’s nearly 48-year armed conflict.

As part of the framework for the peace talks, which were inaugurated on October 18 in Norway, each side was allowed five principle negotiators.

Some observers read Nijmeijer’s presence in Cuba as an attempt by FARC to emphasize the supposed international appeal of their cause. Of all the senior delegates, the Dutch fighter was the sole woman at the negotiating table.

Following the ratification of the peace deal between the FARC and the Colombian government on November 30, 2016, Nijmeijer and the rest of the FARC guerrillas have demobilized and disarmed, and has since entered a reintegration progress.