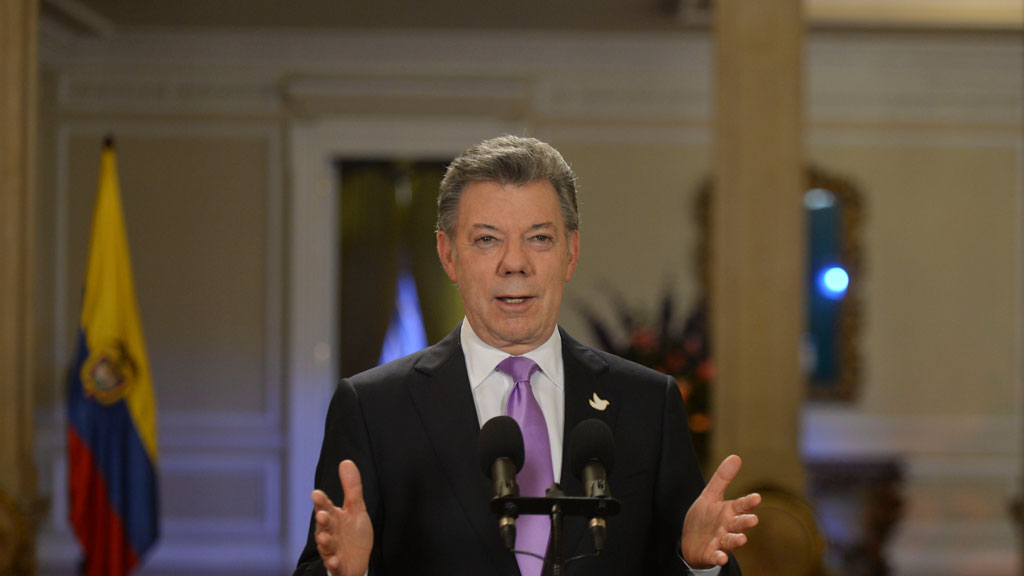 Colombian President Juan Manuel Santos will transfer power to a broad commission of political, business, military and labor leaders who will be advising him during the “definite phase” of peace talks with rebel group FARC.

The commission is part of a far-stretching shuffle in the top of the government.

Santos made the announcement in the same speech in which he announced a suspension of air strikes against the guerrillas.

This suspension is a response to the FARC’s unilateral ceasefire and part of a joint attempt to de-escalate the armed conflict while talks are ongoing.

But while the president announced a change in military tactics, he also announced the formation of a number of bodies that should prepare and guide Colombia through a peace process.

Santos said that in the National Development Plan currently before Congress, there is a request to approve an Inter-institutional Post-Conflict Council.

A separate Advisory Commission for Peace, consisting of a wide variety of both establishment and opposition leaders, should “alongside the president enrich the reflection and contribute to the process, maintaining their critical independence.”

Santos vowed to call the commission for a session “when deemed necessary, so the negotiating team informs it on the advances of the progress, and listen to their recommendations with complete attention.”

The commission is “of an inclusive character” and contains a wide variety of political colors, including prominent members of the leftist opposition, announced Santos.

The president stressed that the members of the broad commission would keep their independence throughout the process.

According to the president, he had invited Zuluaga, a close ally of former President Alvaro Uribe, to take part in the commission.

The three have been highly critical of the talks and — as the president made it seem — had refused to take part in the commission.

“This invitation continues to be valid, and the doors to the commission will be open for your participation and input,” Santos told the politicians.

In a response on Twitter, Pastrana said he would accept the invitation.

Ramirez took to YouTube to tell the president she accepts the invitation and will take part in the commission.

Zuluaga ignored the invitation and insisted that “President Santos is deceiving us.”

Santos’ televised speech comes at a time of growing optimism over the outcome of the talks.

Prosecutor General Eduardo Montealegre, a supporter of the talks, said over the weekend the negotiations had passed a “point of no return.”

A poll recently released by Gallup showed that, following the FARC’s ceasefire in December, public opinion had become increasingly favorable for the talks.

Over the weekend, the FARC and the government announced that both parties will advance a process to remove landmines that have been planted over the past decades by the FARC.

Last year, landmines costs 39 lives, and injured 156 members of the military and 90 civilians.

While general optimism is growing and the will of both parties to make peace is being translated to action, this does not mean the talks are virtually over.

But the warring parties still have to find agreement on the final end of the conflict, which would include an indefinite end to hostilities and the integration of FARC members to a process of Demobilization, Disarmament and Reintegration, or DDR.

So far, the FARC has insisted on laying down but not surrendering its weapons.

More importantly, the guerrillas refuse to go to prison to respond for alleged war crimes.

This has generated major controversy among the Colombian population, 14% of which is a direct victim of the armed conflict between guerrillas and state.

Another thing that is still unclear is how the government plans to compensate these victims.

Nevertheless, the talks seem to be going through a rapid transition and a breakthrough remains possible.

The United States recently appointed a special envoy, while European countries like Germany and France have offered concrete help in the rebuilding process that would follow after the war.

If the negotiating teams are able to pass the remaining hurdles, Colombia will see the end of 50 years of conflict between the rebels and the state that has traumatized the country after decades of extreme political violence.

Instead of trying to violently overthrow the government, the guerrillas will take part in politics and — through democratic means — seek the promotion of their socialist agenda.

However, while the FARC’s renunciation of the war would most likely increase public security in the South American country, it would be false to claim the country will be at peace completely.

The smaller ELN rebel group is still very much at war with the state and international oil companies, while half a dozens of neo-paramilitary groups are continuing to kill and threaten human rights workers, labor union leaders and journalists.

The Santos administration has been holding exploratory talks with the ELN since before June last year, but these talks have yet to make any progress.