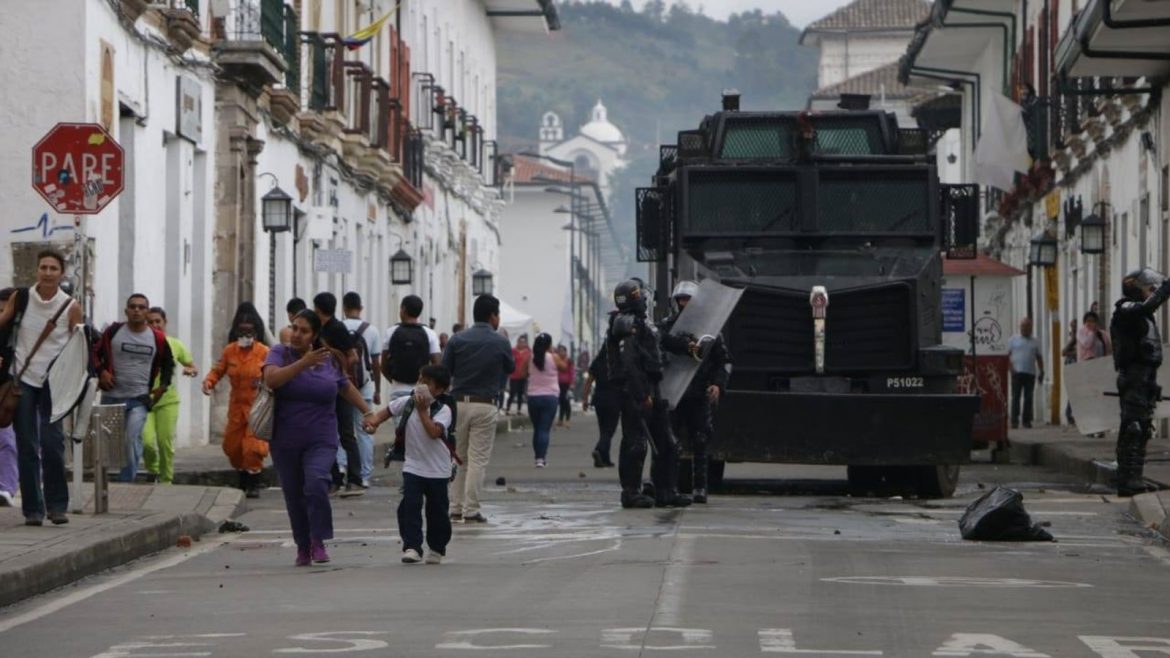 I was one of the thousands of students who took to the streets yesterday to protest about the financial crisis in higher education. We wanted to make our voices heard in a peaceful way and were met with brutal repression from the police as riots broke out around the country.

The protests first erupted in October, demanding the government tackle the problems in public education that have been growing for several years. Campaigners believe that without increased funding and assistance, public education will worsen.

For that reason, different movements decided to march again – peacefully. In Bogota, there were three big marches. The first one chose to go to the south of the city, the second one stayed downtown and the third one headed north.

I went north with the the students from Nacional University. We gathered at the Autopista Norte with Calle 100 and protested in a peaceful way. We walked for at least four hours and the people we passed supported us along the way. Finally we arrived at our destination.

In less than ten minutes the Colombian riot police, ESMAD, arrived to repress the protest. They used teargas and stun bombs, it was horrible. I swear that we were not attacking either the police or citizens and ESMAD launched their weapons anyway.

After the clashes we split up. We ran to many places but they did not stop attacking us. People started screaming: “Without violence! Without Violence!” and then they launched more bombs. Some people fled to supermarkets and others were hit by the ESMAD. This situation only has one name: repression.

It’s hard to confirm which are true and which are not, but the numbers are big enough that they should be investigated properly. It’s certainly routine for ESMAD to cover their badge numbers and ignore the basic human rights of the protesters, as dozens of protesters will attest.

I can’t ignore the fact that violence did occur in other places, like the firebombs in front of the RCN radio station. For me, and the majority of other students, this type of violence against the police – who were specifically stationed there because of past attacks – is totally unacceptable.

But it is also not helpful to allow these few aggressive acts to overshadow the objectives of a peaceful protest as the traditional media are doing in their headlines.

I can understand that people do not agree with the graffiti on the Transmilenio or the road closures. But I ask you now, how can we be heard by the government without a little bit of chaos? Especially when President Ivan Duque prefers to speak to reggaeton musician Maluma instead of the students.

We did not attack anybody

Yes, we did close the streets intermittently. But we did not attack anybody or anything. Until the police came with those bombs, when of course the students started to defend themselves.

“Vandalism does not represent the feeling of students”, Alejandro Palacio, president of the Colombian Association of Student Representatives of Higher Education (ACREES), said to the press.

In other cities similar things happened but few said anything. For example in Popayan, the ESMAD did not care that they were close to schools, and and that children had to be evacuated. The streets of Popayan were set ablaze in dramatic photos posted online.

I reject the violence because it causes more violence and we cannot lose the support of public opinion due to the actions of a few.

As Palacio said, violent actions do not represent students and are not always caused by students. However, the traditional mass media and the government are basing their arguments on those cases to justify and continue the repression. Now we continue the national education strike but with more repression and perhaps with fraying public opinion.