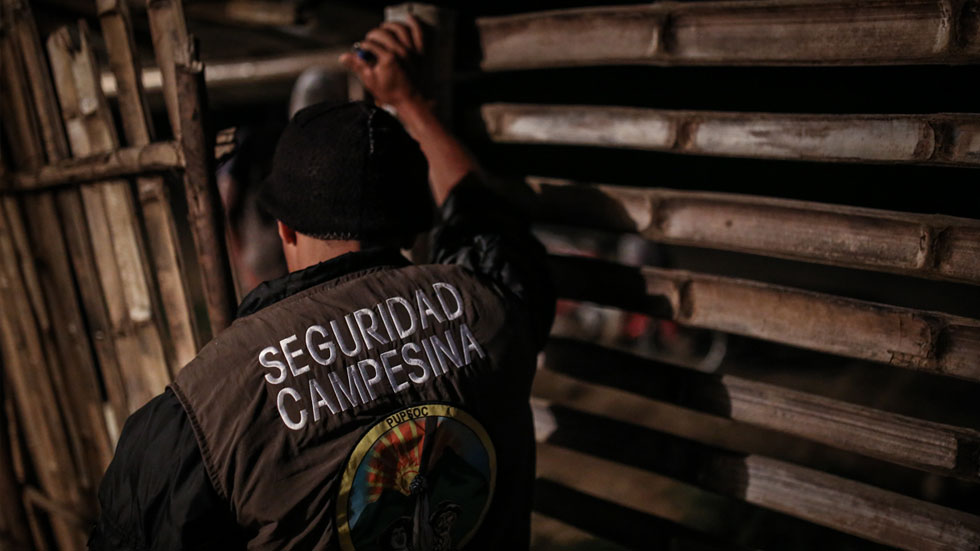 Makeshift roadblocks dot communities in the north of Colombia’s Cauca province as locals form unarmed watch groups, claiming authorities are ignoring a wave of violence in the region.

The 80-man-strong Peasant Security force is unarmed, but responding to real violence and death threats at the hands of paramilitary successors in the municipalities of Caloto, Corinto and Miranda, all located in a former FARC stronghold.

“Faced with the problems, we decided to provide security as the [public security] institutions have not given us any security guarantee.”

Farmers in the northeast of Cauca produce a great deal of marijuana and cocaine, and for many years the Marxist FARC rebel group have collected a “war tax” in return for protection from other armed illegal armed groups or common criminals.

As the FARC has abandoned the region to concentrate its troops for the guerrillas’ impending demobilization, paramilitary successor group AGC, a.k.a. “Los Urabeños,” moved in.

Over the past week alone, the main heirs of the AUC paramilitary group left 13 graffitis to mark their newly conquered territory, bringing fears of violence and chaos in their wake, “El Negro,” one of the guards, told news website Pacifista.

Over 70 human rights defenders have already been killed in Colombia 2016, with Cauca bearing a disproportionate share of the violence.

Many of the guards were wearing the colors of the Patriotic March, an political umbrella organization comprised of hundreds of smaller social organizations that have seen numerous activists killed this year.

The names of almost all the guards have appeared on AGC pamphlets spread in the area. According to the neo-paramilitaries, the Peasant Security guards are FARC collaborators.

To prevent attacks from the neo-paramilitaries, the local guards do their nightly rounds in groups, armed with nothing but traditional indigenous sticks and thermos’ full of coffee.

The men, women and children could impossibly confront the heavily armed neo-paramilitaries, but have been able to tackle common crime by catching motorcycle and car thieves, reported W Radio.

Nevertheless, the situation remains explosives as the army reinforcements promised by the national government to assume territorial control of the former FARC stronghold and impose the rule of law have yet to be seen.