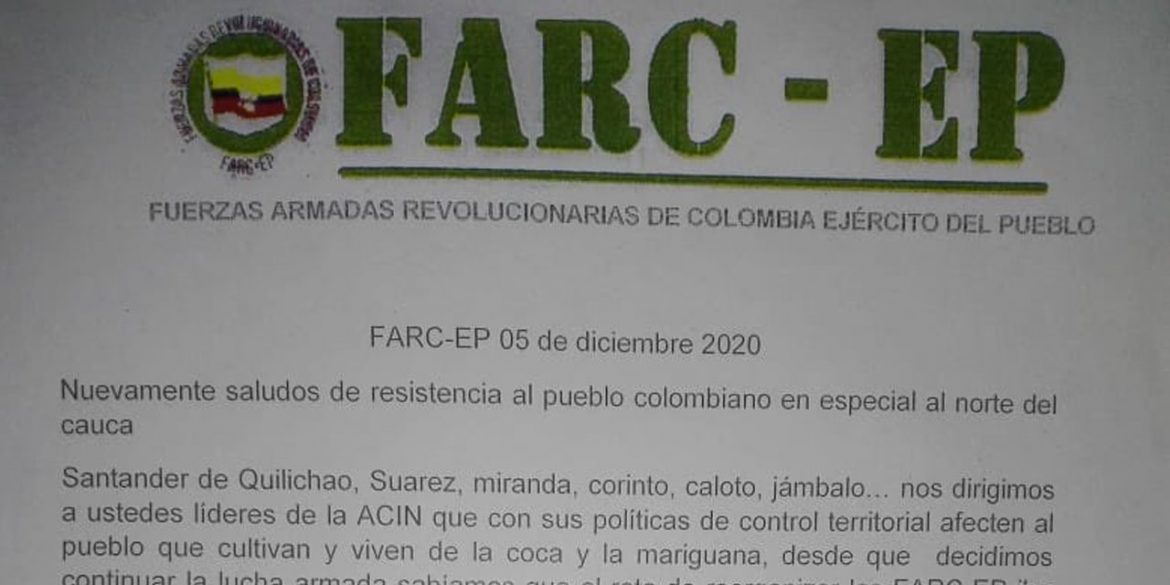 Indigenous leaders from southwest Colombia received a death threat within hours of a massacre in which at least four people were murdered on Saturday.

The death threat signed by a dissident FARC group was sent to the Indigenous Elders from Northern Cauca (ACIN) after armed men on Saturday evening indiscriminately opened fire at people in several places in the war-torn region.

According to Senator Feliciano Valencia, a native Colombian from the north of Cauca, the attacks on members of local indigenous communities took place in the municipalities of Santander de Quilichao and Caloto.

In the death threat, the “Dagoberto Ramos Front,” one of the most brutal and powerful illegal armed groups in the region, threatened to kill more than a dozen other native leaders, including the senator, for impeding the FARC dissidents’drug trafficking activities.

“The situation in Cauca is getting worse,” said Valencia after conflict monitoring NGO Indepaz reported that 13 massacres have been committed in the southwestern province so far this year.

The indigenous have found themselves increasingly under fire from rearmed former FARC guerrillas who want to use their indigenous reserve to cultivate coca, the basic ingredient for cocaine, and marihuana.

Several of the reserves, that enjoy high levels of autonomy, are additionally strategically located near fluvial drug trafficking routes to the Pacific Ocean.

The indigenous are trying to prevent this by increasing their own security with the use of their unarmed Indigenous Guard.

Despite multiple pleas from the native Colombians, the government of President Ivan Duque is reluctant to implement a peace deal with the FARC.

At the same time, however, the security forces seem unable to respond to the drug-fueled violence that has hit Cauca and the northwestern Antioquia province hard.

In both provinces the security forces have been accused of colluding with drug trafficking groups.

Both provinces have a history of violence due to chronic state neglect, and the presence of illegal economies like drug trafficking and illegal mining.

The defense ministry did not immediately respond latest attacks that indigenous organizations are part of a genocide.