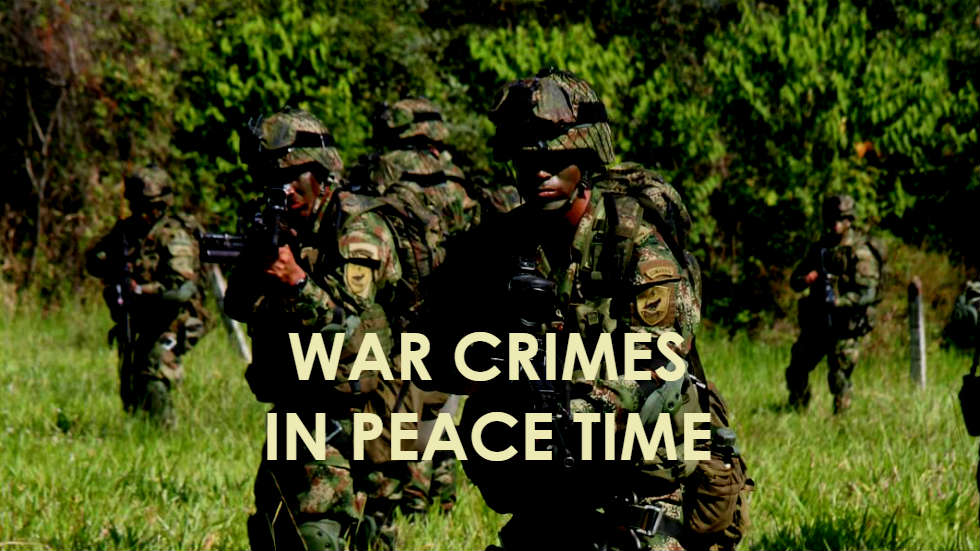 Fifteen civilians were killed and more than 50 were injured after security forces shot indiscriminately into a crowd of peaceful protesters in southwest Colombia Thursday, multiple sources have said.

Immediately following the incident, police and military officials claimed they fired in response to an attack by FARC dissidents.

This claim was roundly denied by local communities and international organizations.

Local reports say anti-narcotics police, at the command of Lieutenant Colonel Arlex Escobar, fired into the crowd, while an army unit on the scene tried to stop the bloodshed.

Hundreds of farmers and community members from the outlying regions of Tumaco, Nariño had gathered near Llorente to protest government efforts to destroy their coca crops when the massacre occurred Thursday.

Many of the civilians present at the protest are farmers of coca, the base ingredient for cocaine, which the government considers to be an illicit plant.

As part of a recent peace deal between the government and Colombia’s oldest rebel group FARC, farmers who cultivate coca are supposed to have the opportunity to substitute their coca for other, legal crops through a national program.

In April, over a thousand farmers around Tumaco signed an agreement with government representatives to participate in that program, offering to eliminate their coca in exchange for government investment in the community and help combating illegal armed groups that operate in the area.

But the government has been slow to respond to the presence of armed narco-trafficking groups that have threatened community leaders not to abandon coca.

On September 28, security forces arrived in Llorente and began tearing up people’s coca against their will and in violation of agreements they signed with the government to participate in the crop substitution program.

Angered farmers immediately gathered around large coca fields, worried that their only means to a livelihood would be forcibly taken from them before they could participate in the substitution program.

‘Our own police are massacring us’

When police opened fire Thursday morning in Llorente, farmers and security forces were in the middle of a multi-day, peaceful standoff on the coca eradication issue.

Between 300 and 1,000 farmers, all of them reportedly unarmed, had gathered in a circle around security forces in a field of coca.

“I showed up, and we were telling [the security forces], ‘Let’s negotiate this, let’s talk about it,'” one eye-witness stated. “And they even said, ‘Yes, let’s do it. Let’s set up a negotiating table.'”

“And in that exact moment they started shooting. Indiscriminately. They gave us everything they had. It was horrible.”

According to media outlet Las Dos Orillas, it was an anti-narcotics police officer who first opened fire on the crowd of civilians.

I saved myself by ducking down and hiding until one of the soldiers ran out of bullets. When the shooting stopped, I ran. I ran by a guy who was shot, and he asked me to help him. But I couldn’t do anything, and he died. They killed him. I was able to escape only getting shot in the leg.

Another witness said,  “I saw a guy, a police officer, about 50 yards from me as I ran. He shot at me and hit me in the arm.”

Wilson Baraona, a delegate from the Francisco Cifuentes Human Rights Monitoring Network, was also present at the time of the incident. He said, “We had surrounded [the security forces] to prevent them from pulling up our coca. That’s when the anti-narcotics police started to shoot at us.”

“Our hands were empty. We came empty-handed, and they shot at us.”

We ended up fleeing down the hill, but they surrounded us and kept shooting at us.

Official reports on the number of dead claim 6 civilians were killed and 19 injured. Other reports from credible sources on the ground say at least 15 civilians have died of injuries related to the shooting.

Shortly after the incident, Colombia’s defense ministry claimed security forces fired in response to “five mortar explosions” and “indiscriminate machine gun fire” from dissident members of the FARC under the command of alias “Guacho.”

A host of eyewitness accounts contradict the official story, however, claiming there were no dissident members of the FARC present. At the time of publication, no police or military officials have been reported injured or killed during the incident.

When asked if there were any FARC dissidents present, one witness stated emphatically, “There were none. None at all. Just us, the campesinos, the civilians, the community leaders.”

“The only thing that is certain,” he added,” is that our own police are massacring us, those of us who fight everyday to make our living.”

A video recorded during the violent incident shows farmers running from rifle fire through the woods. The men are shouting that they are civilians, and they specifically call on the National Army to stop firing.

President Juan Manuel Santos on Friday morning stuck to the official account provided by the Defense Ministry, offering $50,000 for any information leading to the arrest of FARC dissident leader “Guacho.”

Citizens and social organizations have gathered in protest against the violent incident in Pasto, the capital of Nariño, and in Llorente. 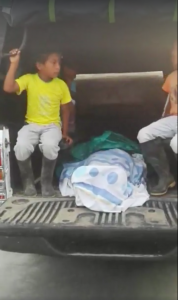 A child in the back of a truck with a body from the massacre in Nariño (Image credit: facebook.com/decima.comuna)