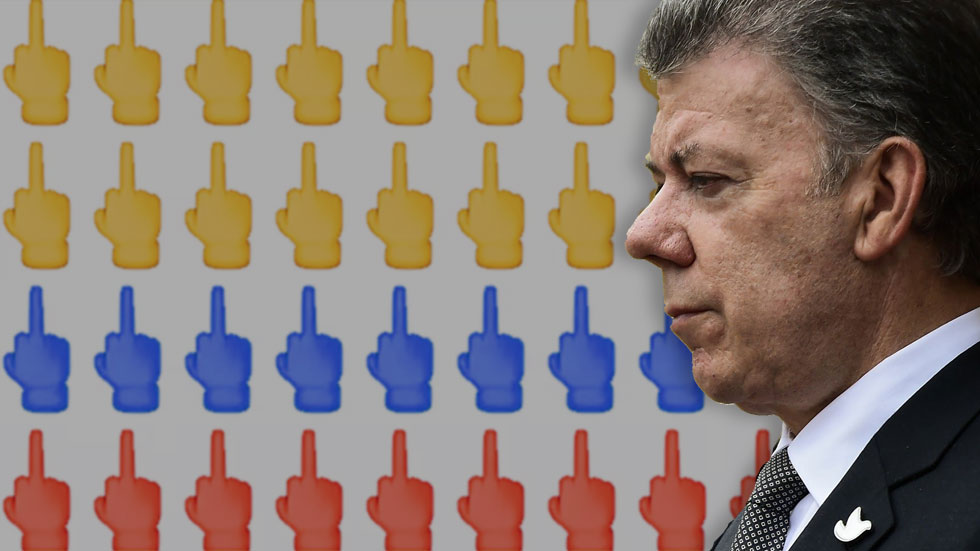 It seems I have upset some people by reporting that Colombia’s military assassinated more civilians under former President Alvaro Uribe than the FARC has in 30 years.

If you think I wasn’t shocked finding this out, you’re wrong. I never anticipated running a headline with such an outrageous claim until I was confronted with it myself. When I was, I was just as surprised as you. Like you probably did, I too supposed the FARC would be responsible for more assassinations.

As expected, I received angry responses from people who felt offended by my work, because the article so irreverently compared a democratically elected president with a terrorist group.

Unfortunately, some innocently thought my article was partisan, either pro-FARC or anti-Uribe. This is a trivial non-argument that ignores the real issue while perpetuating a fictitious division.

What I did went much further than just bashing Colombia’s umpteenth corrupt ex-president or promoting another mundane political preference; I questioned the legitimacy of Colombia’s state and electorate.

I did so on purpose. My duty as a journalist is to monitor power and report my findings to the public.

So, if I find that the state security forces, according to the prosecution, committed even more assassinations of innocent civilians than, according to the Center for Historical Memory, the country’s largest terrorist group, obviously I report on this.

Do you know why left and right no longer matter at this point? Because I could just as accurately claim the Colombian state in eight years assassinated as many innocent civilians as Pablo Escobar killed in his entire criminal career. Do you see what I’m getting at?

Colombia has a problem that goes well beyond left and right, a problem that makes the FARC terrorists look irrelevant and Pablo Escobar an incident in spite of the countless atrocities they committed.

I reported the more than 4,000 assassinations as harshly as I did because within six months this should be exposed internationally by the Truth Commission.

My job is to bring the news, not to twist it in order to prevent mentioning the elephant in the room, something Colombian and American media have been particularly good at.

Whether you like it or not, the International Criminal Court has jurisdiction over war crimes committed after November 2002. This means that if the Colombian state seeks to maintain its 98% impunity rate, the international court has every right to interfere. The court demands that those “ultimately responsible” for war crimes be punished.

If an ex-president is allegedly responsible for even a comparable number of civilian assassinations as the country’s #1 terrorist or the world’s biggest drug trafficker in history, you must admit the country has a major problem and the electorate as a whole needs to take action.

At this point, the political color, or even the identity of one individual president has become irrelevant. Colombia has yet to have its first decent president.

I don’t believe that anyone wants to conscientiously support alleged war criminals because of a supposed shared political ideology. The FARC has shamed and discredited the left, Uribe has done the same with the right.

Most of our ideologies have been abused by Colombia’s politicians and guerrillas, leaving all of us with the moral standing of a Dutch frog with a cocaine habit. Colombia is facing an institutional crisis, and citizens and residents need to stop allowing politicians to divide us in imposed camps.

I believe the Colombian state requires urgent attention and fixes, because the current president, Nobel Peace Prize laureate Juan Manuel Santos, is also implicated in the aforementioned war crimes. And many dozens of congressmen have already been sent to prison over the past 10 years.

Personifying evil by pretending that all is Uribe’s fault is false; we are dealing with a democratic state system that is broken. If we imprison Uribe without fixing the system, we will not have solved any structural problems.

Instead of going after individuals, I would like to know how it is possible that in Colombia a democratically elected president can end up responsible for more assassinations of civilians than the country’s largest terrorist group, because the “use or threat of illicit violence against civilians for political purposes” is the very definition of terrorism.

I believe we are behind in trying to figure out where Colombia’s political system went wrong and how to fix it to prevent further violence. It’s too late to defend Uribe, the guy has 4,000 civilian assassinations on his name, he’s beyond toxic.

Too easily we have resorted to partisan arguments, or the idolization and demonization of elements within Colombia’s broken political system. Instead, we need to be looking for causes and we need to look at the system itself.

What political color the implicated actors are, I don’t care. The judge in six months will also not care and neither should you. Civilian victims need and deserve justice regardless of the political preference of the perpetrator.

Additionally, the legitimacy of Colombia’s entire state system must be restored, and checks and balances must be put in place to prevent a repetition of violence.

Instead of getting stuck in a one-dimensional left-right debate, we need to unite as citizenry and define how loyal we are to liberty as opposed to authoritarianism, peaceful conflict resolution as opposed to warfare, and rule of law as opposed to chaos.

I couldn’t possibly care less about the ideological excuse that puts a democratically elected administration in the league of brutal dictatorships like that of Fidel Castro or Augusto Pinochet.

I so irreverently and purposely undermined the perceived legitimacy of the state by comparing it to a terrorist group only because the state lost and — with our joint support — must restore its legitimacy and moral standing.

Disregarding the force in political power, Colombia’s electorate must emancipate and define its common goal before resorting in partisan nonsense.

We need to fix the system that has enabled and will continue to enable war crimes and violent oppression, while already having generated waves of violence since before the beginning of the Republic.

I do not see how applying these norms is either leftist or rightist, it’s the core democratic value shared by all who are for freedom and against authoritarianism. It’s simply serving the democratic needs of all.

Living in Medellin, I am no stranger to people who insist that Escobar was a great man, that the slain drug lord also helped a lot of people. I tell them the same as I tell FARC apologists: “I don’t care. Too many Colombians are dead.”

I don’t believe that those who attack independent journalism in defense of Uribe realize how close they are to sounding like Escobar admirers. I don’t mean this as an insult, but a desperate wake-up call.

Rather than promote our individual political dogmas, all constituent groups in Colombian society should be working on much bigger and fundamental challenges; the restoration of legitimacy of the Colombian state, repairing the country’s shredded social fabric and promoting democracy.

We journalists have a role in this by putting the public agenda and interests on the political agenda, instead of the other way around. This is what I did, I opposed the structural abuse of Colombia’s state system for the personal benefit of politicians.

This is why I made the comparison and I hope I got your attention. If I offended your political dogma, I am sorry, but we have a bigger problem I believe we can only fix if we work together.

Fixing aforementioned structural corruptions of the Colombian political system is in the public interest.

While many agree the system as a whole is corrupted, not even political scientists have been able to figure out when or where the system got corrupted. We have yet to locate the proverbial cancer that has eroded Colombia’s democracy and has led to so many preventable deaths.

The relevance of this issue transcends that of our irrelevant personal political preferences and we, citizens and residents of Colombia, must unite to promote our common goal, a democratic and peaceful Colombia.

Once that is fixed, we can focus on less fundamental issues and can resume bitching about each other’s political preferences.