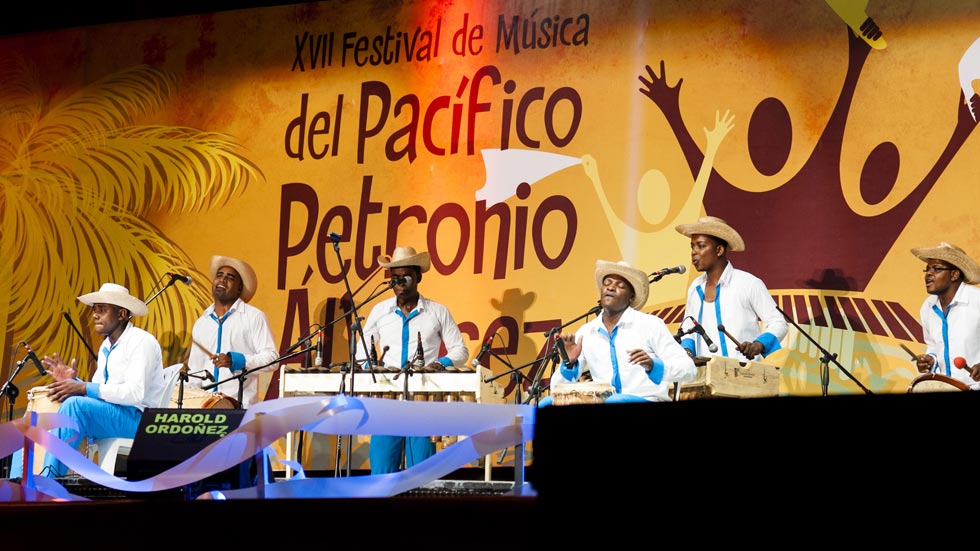 Under the hot night sky a throng of people dance to the sounds of the marimba, drums and maracas coming from the stage. The rhythmic pulse of Pacifico music revs up the already spirited crowd. 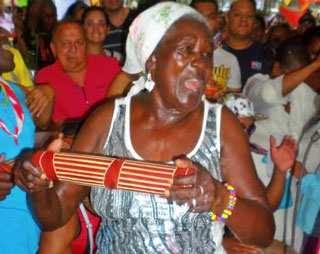 “To start with, it is not so important how you dance just that you dance,” Orlando, a tall and lanky Caleño instructs me on the first night of the Petronio Alvarez Pacific Music Festival in Cali.

“It is easy. Just follow her movements,” He tells me and points to a woman in front of us in the crowd of dancers.

She is in full African garb dancing in the enthusiastic, high-energy style that characterizes this festival. She, like everyone here, carries the signature white kerchief in her hand to wave around and use as a dance accessory.

The woman takes a few quick steps to her right waves the kerchief quickly and then does the same to the left. Everyone in the vicinity behind her eagerly follows her exact moves and I do my best to fall into step with them. Soon she changes the steps and everyone adjusts naturally like one organism dancing and jumping in perfect unison.

MORE: Afro-Colombian music and culture festival kicks off in Cali 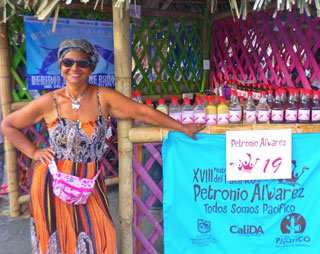 Cali, in Colombia’s south-west is better known the other 51 weeks of the year for its own distinctive style of salsa, an entirely different form of dance and music. For Petronio, however, the city fills with aficionados of the unique culture of the neighboring Pacific coast.

The Pacific coast maintains a rich African culture due to its African ancestry which can be seen in the music, dress and exhibitions at the festival.

This is the eighteenth year of the Petronio Alvarez Pacific Music Festival which has steadily grown in popularity and size since its inception. It’s an important celebration of folklore and culture of the Colombian Pacific Coast and a meeting of the most prominent composers and music groups native to the Pacific region.

The festival offers a musical show featuring the percussive latin beat of merrengues, marimbas, maracas, caucanos violins and an array of drums.

Over one hundred musical groups perform on stage to the delight of the sashaying, hip swaying crowd over the course of a week in August. The festival was established to pay tribute to one of the greatest performers and composers from this region: Petronio Alverez Quintero, whose musical compositions were inspired by the landscape, people and nature of this territory. 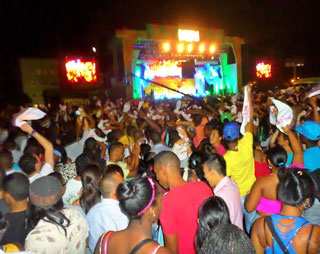 An impromptu dance circle forms around our dancing leader and men take turns to enter the circle and impress her with their own styles. She blushes and laughs at their suggestive gyrations. The crowd encourages them to keep going and chants, “Ay! Ay! Ay!” Local girls laughing at my wide-eyed expression push me into the circle and shout at me, “Baila! Baila!”

My stiff hips are no match for the fluid Latin moves of the locals but my feeble attempt does manage to somewhat entertain the rowdy crowd. Orlando gives me a pat on the back and then enters the circle to show me how it is done.

The musicians wear white clothes with splashes of colour; tropical shirts, straw hats or bright African head scarves. Back-up singers, brass sections, marimba players, maracas players, gangs of drummers and the lead musicians make up the typically large ensembles of musicians on stage. One of the most endearing aspects of the festival is the obvious delight of the musicians on stage. They perform with such rapturous smiles on their faces that the crowd cannot help but share in their happiness. I notice similar smiles on the faces around me when a roaming Conga line dashes past bouncing and weaving through the dense mob of people. 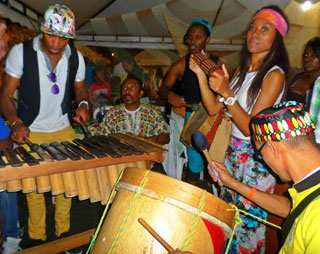 Away from the main stage one can delve into the wonderful array of fish dishes typically available from the Pacific coast; shrimp empanadas, fish stew, fried plantains covered with shrimp in coconut sauce, fish-stuffed papa rellenas. Smaller bands play amongst the artisanal stalls where I see a ten-year-old boy dancing arm-in-arm with an old lady and a small girl dancing with such flamboyant hip movements that a horde quickly forms around her and cheers her on.

It is said that Caleños don’t go out to drink, they go out to dance. One sip of the alcohol on offer at the festival and I can understand why. Viche, toma seca and arrechon get sold in small bottles and every few steps one hears the eager and rapid cry of “Arrechon arrechon arrechon!” Made of viche, sweetened condense milk, peanuts, nutmeg and cinnamon, 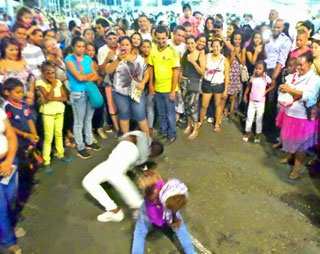 arrechon is the drink of choice at Petronio and has a disturbing, slightly sickening taste. It has the curious attribute of getting worse with every sip. I can only put its popularity down to its reputation as an aphrodisiac. With a few forced gulps of the so-called love potion I return to the main stage.

From the back I see the white kerchiefs waving back and forth; left, right, left, right like a perfectly choreographed troop of dancers. A message comes on the big screen for all to see: “We are all Pacifico”. I am not from the Pacific region but for a moment – when I feel the sentimental glow of the festival wash over me – it feels true. As the night reaches a trembling, delirious crescendo the stomping mob kicks up a dust cloud that rises up into the sweltering night. I rejoice in the vibrant energy and move forward into the throbbing crowd.