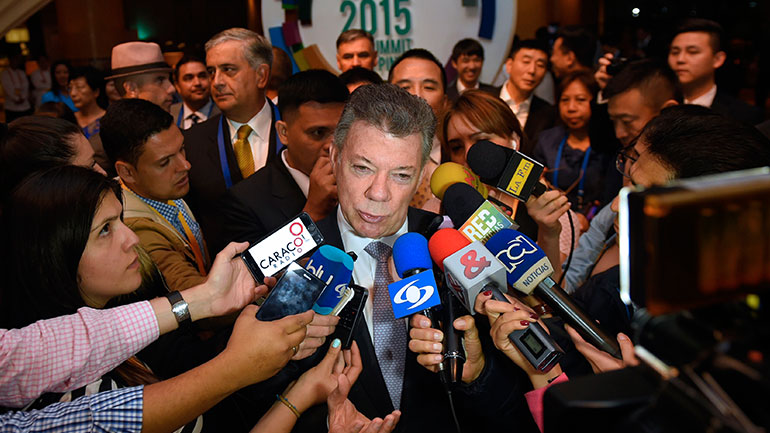 Colombia President Juan Manuel Santos on Monday said he will ask the United Nations to monitor a pending truce with FARC rebels and verify the warring parties’ compliance to the bilateral ceasefire.

The Colombian military will cease all action targeting the FARC once there is an agreement on how to proceed with the actual end of violence, 51 years after the first shots were fired.

The FARC is currently upholding a unilateral ceasefire while the military has drastically reduced military offensives.

Past, presence and future of Colombia’s peace talks

The UN and UNASUR are already monitoring these de-escalation efforts.

However, with half a dozen other illegal armed groups active in Colombia, the monitoring and verification of a truce between the state and the FARC is complicated.

Santos has already asked the FARC to agree to concentrate in specific areas to rule out the rebels’ involvement in violence that could occur, also during a ceasefire.

The FARC has yet to agree to this demand.

Nevertheless, once there is an agreement on a ceasefire, it will prove essential to move fast.

The FARC in effect is the authority in large parts of the country and their concentration could result in violence between or from armed groups looking to take over the FARC’s criminal enterprises like drug trafficking and extortion.

“I am going to ask for support for a UN resolution that when we and the FARC agree to request monitoring and verification this is not just done as quickly as possible, but in the best way possible,” Santos said in the Philippines, where he is attending the Asia-Pacific Economic Cooperation (APEC) forum.

According to the Colombian president, this best way possible consists of “a simple and clean resolution in which they provide the resources as quickly as possible to commence (a truce) the moment we have an agreement” with the FARC.

While in the Philippines, Santos said he had secured a private meeting with the president of China, one of the permanent members of the UN Security Council.

Santos said he also hoped to be able to also gather the support of the United States, whose president Barack Obama is attending the same summit.

The Colombian government and the FARC have challenged each other to agree to a bilateral ceasefire before December 16. Santos and FARC leader “Timochenko” have promised to have a final peace deal ready by March 23, although both have later indicated a final deal may take longer.

The peace talks that are held in Havana, Cuba, celebrate their third anniversary on Thursday.