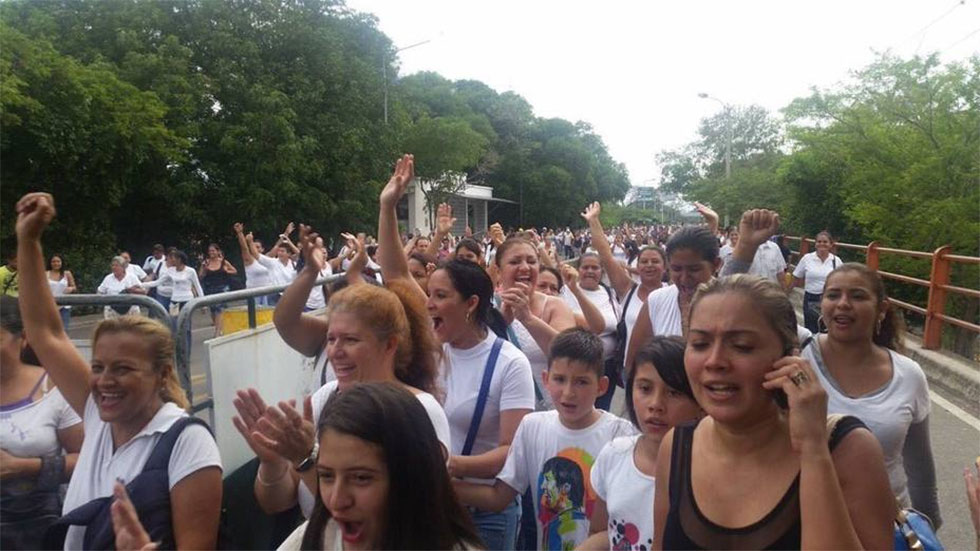 Colombia President Juan Manuel Santos said Wednesday he will seek a private talk with his his counterpart from Venezuela to come a quick reopening of the border between the two countries.

Last week, the Defense Ministers of Colombia and Venezuela met to discuss improved security measure on both side of the border and the eventual opening of the border that was closed by Venezuelan President Nicolas Maduro last year.

However, on Tuesday hundreds of Venezuelan women defied border authority and broke through the security barriers on the Simon Bolivar border crossing near the Colombian city of Cucuta to buy food, toilet paper, medicine and other basic goods that have disappeared from the shelves in Venezuelan supermarkets.

Following the mass incursion of women, Santos traveled to Cucuta and told press that “we will talk to President Maduro, with the Venezuelan authorities. They have also expressed their wish to open the border” after unilaterally closing it in August last year.

According to Santos, the meeting between Defense Minister Luis Carlos Villegas with Defense and military authorities in Caracas was already meant to prevent that “the downside of opening the border are repeated.”

The initial closing of the border happened after three Venezuelan soldiers were shot by presumed drug traffickers or smugglers. However, Maduro also accused Colombians of taking part in conspiracies to overthrow his highly controversial government.

As a results, thousands of mainly illegal Colombians wee deported and many thousands voluntarily left Venezuela after security forces began arresting and deporting anyone Colombian.

The surprise action displaced a total of 20,000 Colombians and caused a humanitarian crisis on Colombia’s side of the border where aid organizations had difficulty finding shelter and food for the sudden influx of Colombians, many of whom had nothing but the clothes they were wearing.

Colombia and Venezuela for decades have had a love-hate relationships.

While both countries claim to be sister nations as they were both liberated by national hero Simon Bolivar, the countries have throughout history blamed their neighbor for domestic issues.

According to the Venezuelan government, Colombian paramilitary forces have entered Venezuela to topple the increasingly authoritarian government of President Nicolas Maduro, while Colombia’s former President, Alvaro Uribe, blamed Venezuela of being a “terrorist haven” for leftist Colombian guerrillas.