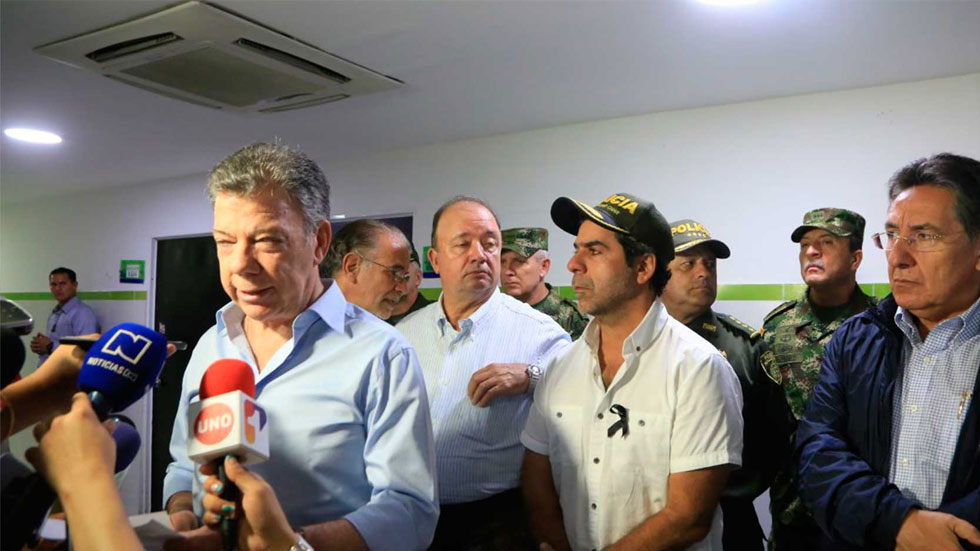 Santos made the announcement after meeting with Gustavo Bell, the negotiator who met with the guerrillas in Ecuador last week to negotiate a second ceasefire.

The president the talks would remain suspended “until I see coherence between their words and actions.”

The ELN said that attacks would continue until there is agreement on a bilateral ceasefire that would allow a successful continuation of peace talks.

The current stalemate is similar to the one before last week when the United Nations urged the president to resume negotiations about a truce with the 53-year-old guerrilla group.

The resumption of violence comes in the middle of a peace process with the FARC and months before the first round of a presidential election.

Liberals and socialists have warned about the possible consequences of an escalation of violence for an ongoing peace process with the FARC.

“We cannot permit violence and terror to return to the streets of Colombia. Let’s once and for all turn the page of violence,” leading candidate Sergio Fajardo said.

Runner up Gustavo Petro, a former guerrilla, remained quiet after initially hinting at the involvement of drug traffickers.

“There is nothing to negotiate with someone who only believes in terrorism and does not respect human dignity,” said Duque, the candidate for a coalition of opponents of the peace processes.

Duque said the government must “immediately” end the talks with the ELN.

Vargas, who was Santos’ vice-president until last year, said “the government cannot resume negotiations with the ELN [and] must react with determination and authority.”

The ELN seemed unimpressed by the political commotion.

“While the two parties do not agree to the new ceasefire, military actions of both sides will continue, exactly as happening right now,” the guerrilla leadership said on the ELN website.

The far-left group has been fighting the Colombian state since 1964. The temporary ceasefire that expired earlier this month was the first in the group’s history.

Public rejection of the attacks has been virtually absolute.