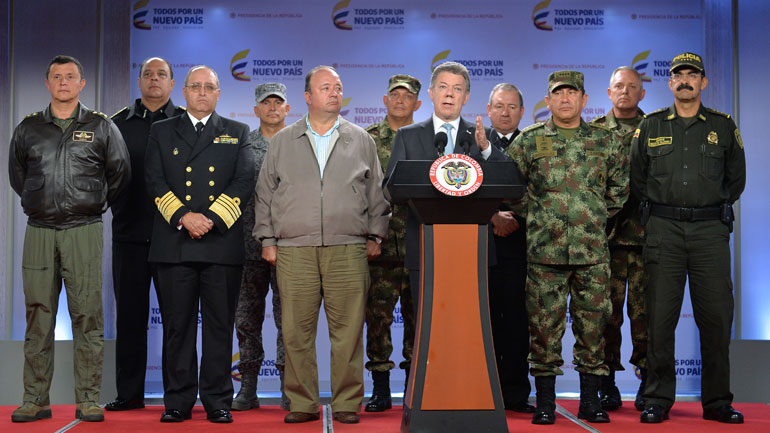 In a speech, Santos announced he would replace the heads of the National Army, the Navy and the Air Force. The Armed Forces commander and
the director of the National Police would stay on.

The new commander of the National Army is General Alberto Mejia, the Navy’s new top commander is Leonardo Santamaria and the Air Force will welcome General Carlos Bueno as its new commander.

Controversially, Armed Forces commander General Juan Pablo Rodriguez will stay on, in spite of recent revelations he and the outgoing Army commander, General Jaime Lasprilla, were implicated in the executing of several dozens of civilians, a gruesome military practice that cost more than thousand civilians their lives.

Santos had already announced a change in the military command when replacing the defense minister last month.

The new military leadership takes office amid what has been called a critical point in ongoing peace talks with the FARC, Colombia’s largest and oldest leftist rebel group.

Peace talks with this group have been marred by ongoing rebel attacks that have done major damage to the credibility of the talks and their public support.

Consequently, it has become uncertain whether the new defense minister and military commanders will be leading the armed forces’ transition towards peace or to a new phase in Colombia’s 51-year-old conflict.

The new commander of the National Army General Mejia, has been submerged in the military since he was a child. His father was the Armed Forces commander under President Virgilio Barco (1986-1990) and he is married to the daughter of Manuel Sanmiguel, a retired general and ex-rector of the Military University.