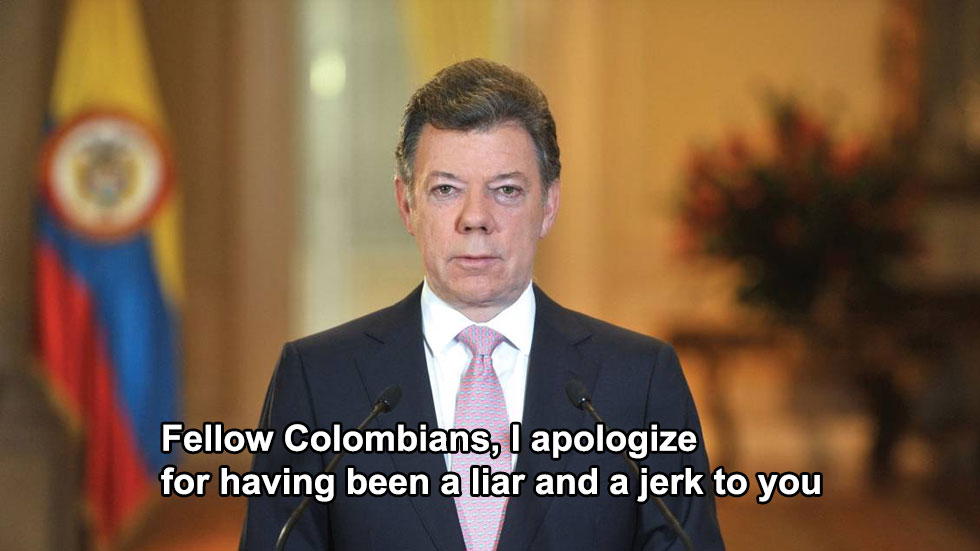 Santos should make amends with Colombia, not Uribe

Instead of talking to politicians accused of war crimes and election fraud, President Juan Manuel Santos should listen to the people of Colombia if he wants the country’s peace process to succeed.

The fact that a majority within a politically engaged minority suspended the peace process is a major problem and threatens the success or level of success of the process.

The tragedy of the vote is that the vast majority of Colombians, 62.6%, never even made it to the voting booth, and were not represented in the result.

According to guest columnist Elena Butti, this is due to major skepticism towards social change and the eradication of violence, and an instinctive reluctance to participate politically in a country where civil society leaders and human rights defenders have been one of the most targeted social groups by all armed actors.

I would argue there is another reason; a lack of commitment of Santos and other so-called leaders to attend and serve the concerns and interests of their supposed constituency.

I believe this reason must be considered if we want a rapid and broadly supported peace.

The referendum’s mass abstention is a direct consequence of the systemic political exclusion of the country’s poor and rural population, and to a lesser extent the middle class.

A forgotten, but significant reason the turnout rate in past elections was higher is because the political parties literally picked up voters from remote and poor areas, hoping this would get them elected.

But not this time. It was possibly the most important vote of the century, but nobody was getting elected.

Colombia’s political parties generally don’t spend their money on a cause or purpose that is not self-serving, so the usual mass pollution of banners, stickers and internet ads never happened.

The only party that did spend budget on propaganda was the opposition Democratic Center, because it did have a vested interest in the peace process, or the sinking of it rather; numerous of its leaders are implicated in war crimes.

But in spite of the widespread use of lies, fear-mongering and disinformation, Uribe and his electoral Medellin Cartel could not even obtain more than 55,000 votes more than the virtually non-existent “Yes” campaign.

To put it differently, Colombia told Uribe to get lost only a little less loud than they told Santos. The vast majority did not believe Uribe’s disinformation and Santos’ exaggerations.

Let’s leave Uribe’s self-serving nonsense aside for a minute, he’s irrelevant. The guy who has the duty to achieve peace is Santos and the actual electorate knows their president good enough to know that this guy cannot be trusted.

Back in 2012, when the talks had just started, I addressed this lack of political confidence after a friend of mine explained very clearly that neither Santos or the FARC “have ever shown to give a shit about me. The politicians and the guerrillas will probably cut a deal, divide the pieces of the pie and we’re left with nothing.”

Do we really trust Colombia’s politicians and guerrillas to deliver peace?

I believe my friend was proven wrong, considering the government created a land fund of 3 million hectares to give to poor and landless farmers. In the peace deal, the FARC vowed to reconstruct what they had destroyed. My skepticism had lowered already when victims were invited to take part actively in the gratification of their rights.

In Bojaya, a village near the Pacific where the guerrillas killed 79 people seeking shelter from combat in a church, FARC leaders advanced the process by first asking forgiveness for the suffering they caused and later returning the Christ statue they destroyed in the 2002 attack on the town.

My friend voted “No” nevertheless.

The big difference between me and my friend is that he has a day job and I don’t. While he was busting his chops running his business, I was in my comfortable chair reading peace deals and watching reconciliation ceremonies.

My friend never had that luxury because he has an actual job. He did have to rely on his confidence in Santos and the FARC, which had not changed since 2012 because, well, where to begin.

Santos vs The People

During the peace negotiations alone, Santos faced repeated protests from school teachers, miners, farmers and truckers because he hadn’t kept promises made to end earlier strikes in any of those deals.

In fact, I can still remember him saying “that so-called rural strike doesn’t exist” while virtually the entire country’s rural population was enraged.

He also sold Isagen, a perfectly profitable public enterprise, for a jiffy to some multinational against the will of the people. The list of Santos going against the public agenda goes on and on.

To make his public policy record even worse, the administration consistently neglected the country’s years-long crises in education and health care, rampant corruption and urban insecurity, stuff that affect people’s lives immediately and is his job to attend.

While he persistently went against perceived public interest and opinion, Santos was promoting the peace talks

Consequently, pollsters barely showed an increase in approval when he signed a ceasefire in June and peace in September.

FARC: Too little, too late

The FARC, during most the peace talks, continued killing, bombing and extorting and did not begin showing substantial gestures of peace until very late in the process.

Of all people and things in Colombia, paramilitary successor group AGC, made an observation after the referendum I thought was surprisingly savvy.

There was no lack of important gestures by the FARC, but they took too long to happen like the destruction of explosives in the plains of Yari, the public acts of repentance for the massacres of La Chinita and Apartado, or their expressed will to contribute property for the reparation of victims. They did this so late it had no influence whatsoever on the result.

The FARC may have been late to achieve their cause, but at least they tried. More importantly, if they continue to show their commitment to peace even now tensions are high, they will slowly get the chance to earn a constructive role in promoting peace.

Well, that town voted 96% in favor of the peace deal as it stood. They were so aware of the implications of and effectively empowered by the deal that their local choir even openly confronted their smug president in the middle of the peace ceremony. Yes, while the world was watching.

The Colombian state has so far only apologized for the extermination of the Patriotic Union party and has done nothing to attend other imminent issues on the public agenda. I have yet to hear an apology for the 2013 killing of dozens of farmers in the widely-supported rural protests.

Securing a peace deal through a referendum is no longer relevant, but securing a broadly supported peace is more imminently important than ever.

Talking to Uribe is a waste of time, the guy in multiple elections has shown to represent a clear minority, has one of the worst human rights records in history and has done nothing but sabotage the process, something that can’t possibly be in the public good.

In an actual democracy, the president attends the needs of the people, not just the geriatric reactionaries with war crime allegations dangling over them.

Instead, Santos ought to dedicate his attention to the Colombian people and their concerns, mend his broken promises and effectively prove he is a president who attends the public agenda instead of ignoring or denying its mere existence.

Additionally, it is important he demonstrates his proposed peace deal in fact has the effect that children can again play soccer after the termination of their town’s mine clearing process, that in Corinto seven new shops have opened because the town is no longer under attack and the economy is reactivated.

Once Santos has proven he is a servant of the public agenda rather than the imposer of a political agenda, he will be able to ask people to make compromises, sacrifices even, Colombia’s peoples are generous peoples.

If Santos attends them, the actual voters instead of the other corrupt politicians, this would naturally result in the elementary popular support obtaining a stable and long-lasting peace as he promised.