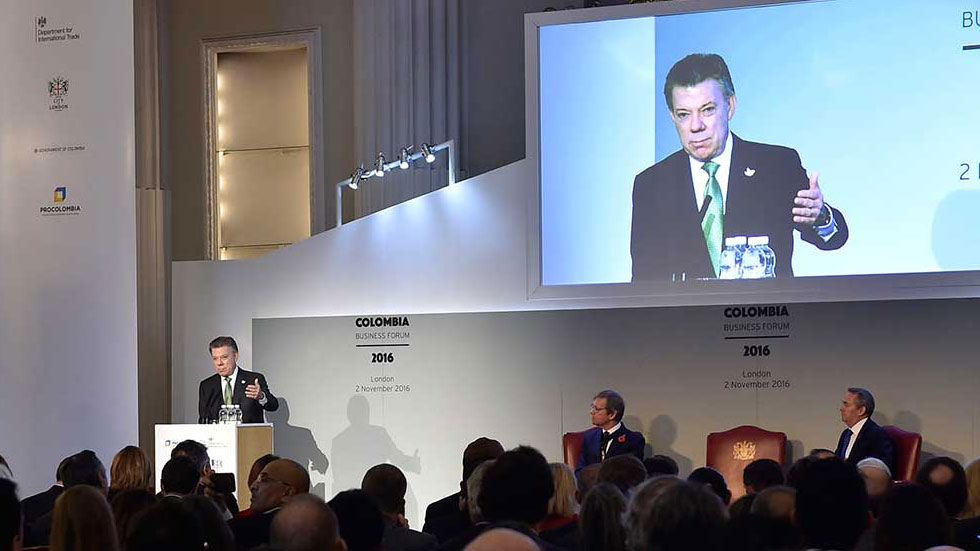 Santos hints new Colombia peace deal will be ratified by Congress, not through referendum

Colombia President Juan Manuel Santos hinted Wednesday that a newly negotiated peace deal with the FARC would be ratified by Congress and not through a referendum.

While meeting with business leaders in London, where the Colombian president is on a four-day state visit, Santos said “I will have the power to implement it through Congress.”

Santos earlier said that a second referendum to ratify the peace deal and allow the resumption of the peace process with the FARC.

Colombia’s voters narrowly rejected the initial peace deal in an October 2 referendum to the surprise of many.

Since then, both the Santos administration and the FARC have been negotiating “adjustments and clarifications” for the deal with a variety of sectors in society that predominantly voted “No” to the deal.

Following a first round with “No” representatives immediately after the referendum, FARC and government negotiators returned to Cuba to discuss changes.

From Monday to Wednesday, the government delegation is meeting with the most vociferous of opponents, former President Alvaro Uribe, to see if the hard-line opponent is willing to cease his years-long rejection of the peace talks and the consequent peace deal.

On Thursday, the government negotiators will return to Cuba and meet with the FARC leadership to see which of Uribe’s proposals can be integrated into the peace deal.

However, strained relations between Uribe and Santos, and the former president’s apparently unmovable position could lead to his proposals being discarded as a whole.

Particularly if a revised peace deal is sent to Congress, where Uribe has only 15% of the seats, it will be relatively easy to ignore the former president and current senator.

However, it would also be a risky move as Uribe’s political allies have a vested interest in the outcome as many, including Uribe, are implicated in war crime investigations.

In spite of this, the former president can still count on the support of a significant, but vocal minority of mainly conservative Colombians.