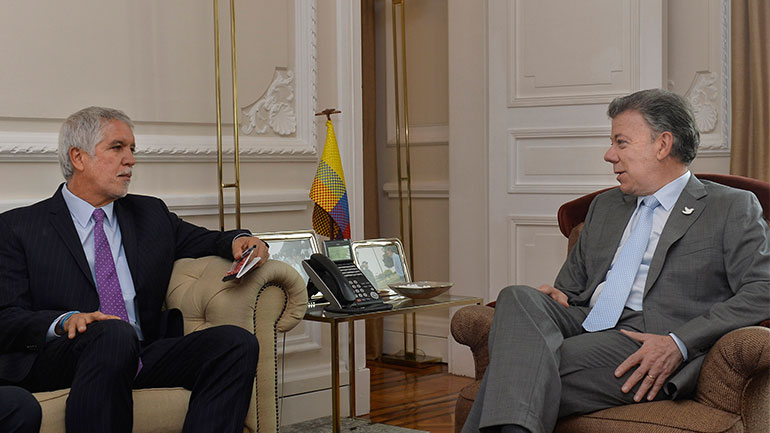 The head of state met with Peñalosa and vice president German Vargas in the presidential palace where the mayor expressed his goal of working with the government in projects to improve the capital city, the principal being the creation of the metro.

“We are going to greet the President and tell him to help us on many issues such as the Metro, motorways and issues related to security,” said Peñalosa, who won the position of mayor for the second time on Sunday.

“We are waiting to secure the resources for the metro and then we will begin planning the best metro for Bogota, one that costs the least, that is best for the people and that is as big as possible, with the lowest possible risk of over spending; here we will take technical, not emotional decision,” said Peñalosa upon leaving the presidential palace.

Vargas Lleras announced that the Council for Fiscal Policy (Confis) will make the first step in the approval process of providing the resources to construct the long awaited and much needed metro system that is estimated to cost $9.6 billion.

“Today Confis will approve [the resources needed] but this is not the last step. Next the [National Council of Economic and Social Politics] and then the [Superior Council of Fiscal Politics],” said Vargas Llleras, adding that as well as the construction of the metro, there will also be the advancement of “many other” public works.

This Integral Mobility Plan will also seek to improve the infrastructure of the entrances in to, and exits out of the city.

Peñalosa, who will take office on January 1 2016, won 33% of the votes in the elections on Sunday, and hopes to restore order to the capital city by tackling its gridlock traffic and its significant security issues.