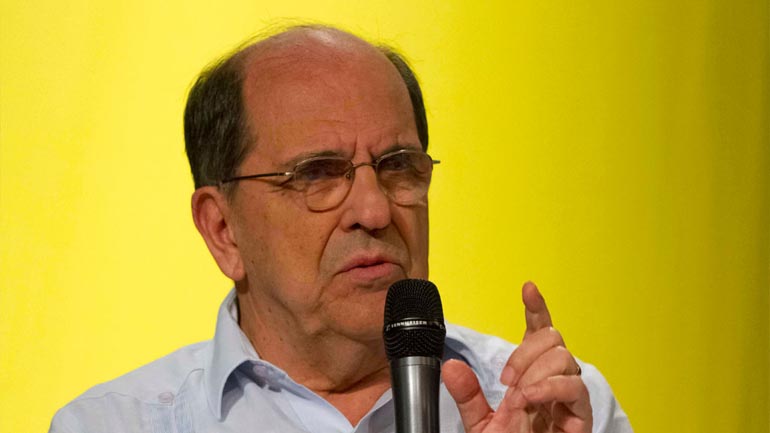 Cali Mayor Rodrigo Guerrero is a public health expert who has survived a fraud and corruption scandal that hinted at the murky underbelly of Cali politics.

Well in his seventies, Guerrero has had a long career spanning education, public health and politics.

His first elected position was as mayor of Cali in 1992. Guerrero took control of the city with the Cali Cartel at its zenith and the city murder rate soaring. In response, he pioneered an innovative approach to security based on his public health training. The “Epidemiological approach”, which approached violence as a contagious disease whose spread was determined by levels of risk factors, was later adopted by Antanus Mockus in Bogota and in several other cities around Colombia.

After his stint as mayor, Guerrero disappeared from the public eye, only returning to run as a Councillor in 2007. Guerrero was elected on the back of high popularity among Cali’s social and economic elites, a support that withered away to next to nothing in poorer neighborhoods. It is a power base he has maintained going into the current elections, along with the tacit support of Cali daily El Pais.

He resigned his post as Councillor in March 2011 after President Juan Manuel Santos offered him a position managing a program helping poor famers. However, within months he abandoned the role to launch his second bid to be mayor. Despite a last minute attempt from his allies in the Conservative Party to award him the official party endorsement, Guerrero was too late and instead had to collect enough signatures to earn him a place on the ballot.

Since collecting 120,000 signatures, more than enough to stand, Guerrero has been defending himself against what his allies have called a “dirty war” against him. The first obstacle to his election came with the revelation that he could not work for the state until 2014 because he was the legal representative of a mine belonging to his family. He successfully argued that the sanction should not apply as he had not received any payments from the mine since 2008.

Next came a scandal of national proportions that nearly cost Guerrero his candidacy and instead cost a senior election official his job. In August, Guerrero, along with fellow independent Susana Correa, was removed from the ballots by the Electoral Registry after it was claimed their petitions had included thousands of signatures belonging to dead people, prisoners and people that did not exist. Guerrero immediately challenged the allegations and even contacted President Santos, who he told that days before he was removed an unknown man had asked for over $100,000 to “solve his problem with the Registry about the signatures.” He also claimed he was later asked for the same amount to “win the election.”

Guerrero blamed the Director of the Cali Registry Office, Hollman Ibañez, accusing him of corruption. Following an investigation, Ibañez was removed from his post and soon after Guerrero was reinstated, when the Registry decided to count all of the signatures on the petition even though they still found thousands belonging to dead people. Doubt has since been cast on Guerrero’s version of events after his connections to Registrar General Ariel Sanchez, who took the decision to remove Ibañez, were revealed. Since the affair, Cali has seen a poster and graffiti campaign against Guerrero, with slogans and messages accusing him of corruption and being a “signature thief.”

Despite the scandals, the polls leading up to the election showed Guerrero with an insurmountable lead over his nearest rivals. Although his independent candidacy has seen divisions in several parties over whether to support him or not, his backing from large sections of the Conservative Party, the Green Party, the ASI, the current mayors office, senior U Party and Cambio Radical figures, the media and the elites of Cali carried him comfortably over the line and he was named Mayor of Cali on January 1, 2012.

Guerrero’s second term as Mayor of Cali ended in December 2015.