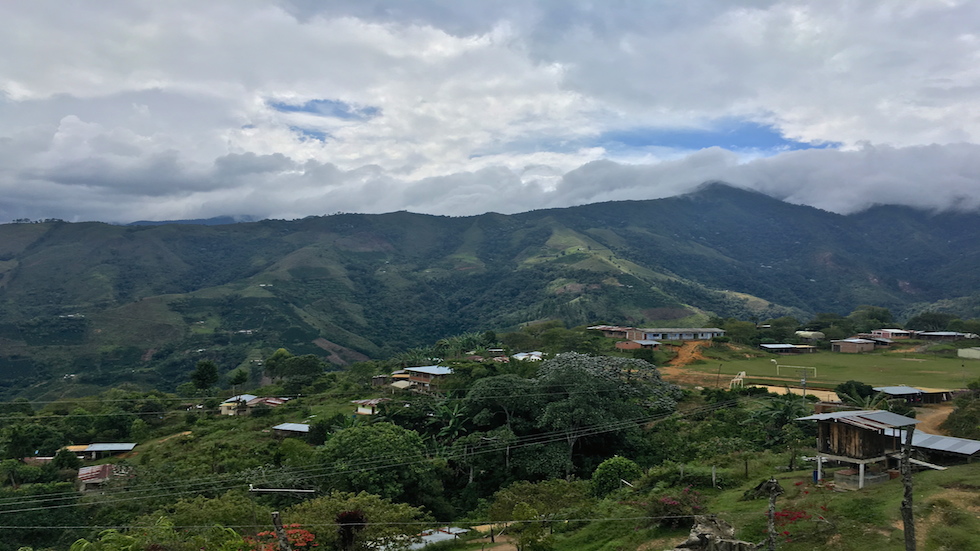 Resistance in Colombia: how a village defied war and drugs

With increasing tensions and violence surrounding Colombia’s efforts to eradicate coca, one small village that resisted the plant for decades is struggling more than ever to defy the illicit economy.

Despite the powerful economic incentives to planting coca, the village called Alsacia, a largely Afro-descendant community tucked into the mountains of the Cauca province, has successfully maintained a coca-free community since the village banned the crop in the year 2000.

Now, Alsacia is an island of coffee in a sea of coca.

The allure and violence of an illicit crop

In other parts of Alsacia’s municipality, called Buenos Aires, many mountain hillsides, even along the municipality’s main road, are alight with the lush budding of the coca plant.

Coca, the base ingredient for cocaine, offers an attractive economic value. The plant is ripe for picking every three months, and with an unrelenting international demand for cocaine, laborers picking coca can make nearly twice as much money as they would cultivating coffee.

In order to combat coca cultivations, and as part of a process to end a half-century-long armed conflict with the FARC, the government is approaching farmers in the Cauca province with offers of money, technical support, and infrastructure in exchange for exterminating their coca crops.

But with pressure from the US, the government is simultaneously engaged in a countrywide effort to eradicate large coca cultivations by force, contradicting the Final Peace Agreement with the FARC, which says farmers should be able to voluntarily substitute their crops before facing forced eradication.

In many cases, the joint strategy of forced and voluntary eradication has led to violent and deadly clashes between security forces and coca farmers.

In Tumaco, Nariño, coca-related clashes in early October lead to the massacre of at least seven farmers at the hands of anti-narcotics police. Jair Cortes, a local community leader who denounced the bloodshed, was murdered last week by armed actors in Tumaco, despite protection measures he had from Colombia’s National Protection Unit.

In Alsacia, one of the few villages in Colombia specifically mentioned in the Final Peace Accord with the FARC (in this case as a priority for removing landmines), leaders say the government isn’t protecting communities that have fought for stable self-governance and independence from coca despite pressure from armed actors. 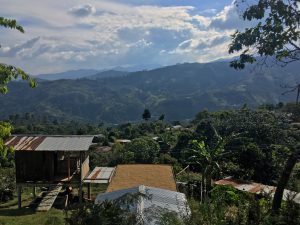 In times of “peace,” the struggle to resist coca cultivations remains dangerous, and its payoffs uncertain.

With an increasing presence of illegal armed groups, as well as the approaching turmoil of forced eradication operations, leaders in Buenos Aires worry that the disorganized dynamics of Colombia’s peace process could compromise the tranquility and economic advancement that coca-free communities only recently achieved.

We’ve suffered war here. Now we’re actively constructing peace, and they ought to take that into account, to help us do so.

A history of organized resistance

Only four years ago, Alsacia was engulfed in violence. The FARC was stationed in the forests around the village, engaged in a bloody standoff with the army, based on an opposing mountaintop.

During a three month period of near-daily clashes, dozens of families in Alsacia confined themselves into a community house at the center of the village, refusing to leave. Bullets rained down around them on a daily basis. 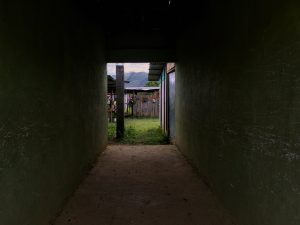 A hallway in Alsacia’s community house, where the whole village was confined for three months during sustained combat between FARC and government forces in 2013 (Photo: Atticus Ballesteros)

Years earlier, in 2000, the community of Alsacia fled their village en masse after the arrival of AUC paramilitaries who detained and threatened members of the village. One captured village leader was told his “head would make a nice soccer ball.”

When the community fled the area, community leaders traveled to Bogota to seek the conditions that would allow them to return to their homes. The government rejected their proposal, claiming they could not create the conditions for a humanitarian return at that time. So the community marched back into Alsacia alone, living with a paramilitary presence in the area until 2005.

At the heart of all of these violent confrontations lay a small green bush, fueling the tumult.

But much of northern Cauca had never seen the coca plant before the late 1990s. Aerial fumigation of coca cultivations–a policy supported by the United States and funded through the bipartisan Plan Colombia aid package–displaced poor coca farmers in southern Colombia, causing them to migrate with their plants up to remote territories like northern Cauca.

Once a relatively peaceful zone for coffee, gold mining, and wood plantations, northern Cauca quickly became a battleground, in part over the base ingredient for cocaine.

The arrival of coca, more than anything else, increased the presence of armed groups in our territory. It’s a plant that kills.

“Coca made our territory a place of interest for the paramilitaries. We had guerrillas beforehand, and they made us pay vaccines,” she said, referring to the armed conflict’s illegal system of extortion. “But we never saw violence like we saw under the paramilitaries before the arrival of coca.”

When coca arrived to the surrounding area, village leaders in Alsacia immediately rejected the plant. They agreed on an internal rule that no member of Alsacia could plant coca. Violators of the rule would lose their plot of land and their ability to participate in Alsacia’s collective company and its transportation system.

Alsacia was a new village to be making such rules, founded only in 1993. But the community was organized, and they have since leveraged that organization time and time again to resist violence and the economic draw of coca.

“Most of us come from the neighboring area of Palo Blanco,” said one community leader, Daniel. In Palo Blanco, Afro-Colombians had maintained small subsistence farms while relying on ancestral gold mining practices along the Cauca River.

“But in the 1980s the government gave permission to a foreign company to build a dam on the Cauca River,” said Daniel. The dam flooded farms, diminished the possibility of gold mining, and uprooted our whole communities along the river.

“We lost our source of living,” he said. “We lost our ability to fish, to mine. We lost all of the cultivations we had along the river, the coffee, and plantains.”

“So that’s why we organized and moved here, to what is now La Alsacia.” 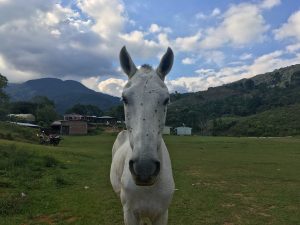 A model for peace

Now, as an example of effective organization against violence and the drug trade, members of Alsacia want the government to better support their community.

“The government needs to support people with coca in order to incentivize them to let it go,” Daniel said. “But if the government does not simultaneously support those who don’t have coca, the incentive will fail.”

“People will just take the incentive and keep planting,” until there are alternative crops that are economically viable in the long term, he added.

We need to make it just as valuable to grow coffee as it is to grow coca.

Another community leader, Wilson, agreed. “You need to promote and encourage those who don’t have coca.”

But the government didn’t do that before initiating the crop substitution program, he said. Two years ago, when talk about a possible substitution program reached Buenos Aires, many in the municipality actually expanded their coca cultivations hoping to benefit from the new program.

Many even eradicated coffee crops in order to free up space for coca.

The National Crop Substitution Program “supposedly bares the participation of people who chose to plant coca after a certain date. But they have no way of measuring that,” Wilson said, noting how quickly the plant can establish itself in a given area. 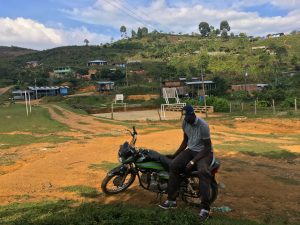 Located adjacent to one of the FARC transitional zones, where members of the former guerrilla group gathered to lay down their arms, Alsacia, like many other small villages around the country, is supposed to receive special government investment in infrastructure, as well as programs to formalize land holdings for small farmers.

Alsacia is also mentioned in a specific part of the peace agreement with the FARC as a priority for removing landmines, although community leaders claim they have still not been notified of when that will begin.

“We’re currently negotiating agreements so that these programs will be guided by our community council,” said Daniel, referring to a uniquely Afro-Colombian system of local governance protected by law.

“The ethnic chapter of the peace accord,” a special text covering any part of peace implementation that may affect minority communities, “says these projects must take our perspective into account.”

Despite the danger that may come with the community council taking on resource implementation around Alsacia, village leaders believe no other group is better equipped to manage the post-conflict scenario.

When those currently growing coca will have to start over from scratch, we will be here with years of experience growing and selling coffee and other products. We have our systems constituted, and we are well organized.

“I see our future positively,” said Daniel. “We’ve stuck to our principles, and now with the end of conflict there is the expectation that those who have suffered will receive the help they deserve.”