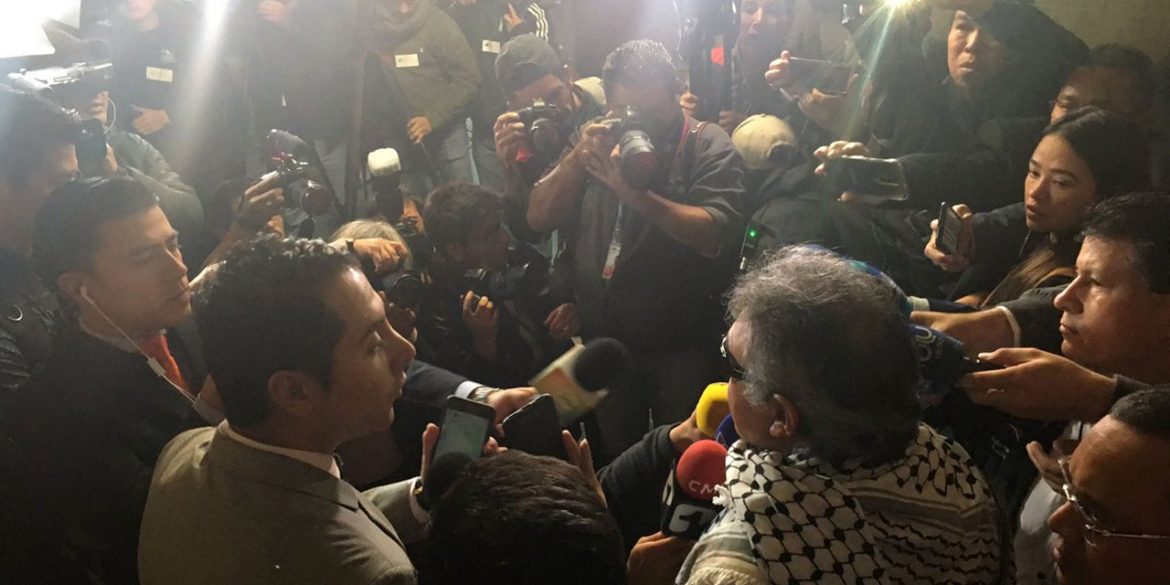 "Jesus Santrich" talks to the press after being sworn in as congressman (Image: "Pablo Catatumbo")
News

Former rebel leader “Jesus Santrich” reported himself at both the war crimes tribunal and the Supreme Court on Tuesday almost immediately after being sworn in as congressman.

Santrich, whose real name is Seuxis Hernandez, was supposed to be sworn in as the FARC’s leader in the House of Representatives in July last year already, but was impeded because he was in jail over a US extradition request based on an unsubstantiated drug trafficking charge.

Having botched extradition, left jail and entered Congress, Santrich will still have to respond for war crimes before the war crimes tribunal as part of a 2016 peace deal while the Supreme Court is investigating the veracity of the US drug trafficking claim.

“If Colombia’s justice system follows the rule of law we will achieve another victory and those who have tried to frame me are going to have to respond,” the FARC’s new leader in the House told press before going to court.

The Supreme Court was forced to suspend a scheduled hearing of a DEA informant after American authorities said the witness, who is enjoying DEA protection, is not yet ready to testify against Santrich.

Chief justice Alvaro Garcia said Tuesday that the court was also waiting on evidence from the US, but stressed that American authorities “have expressed their willingness to collaborate with all the evidence.”

The Special Jurisdiction for Peace (JEP) was forced to suspend hearing the former rebel leader over his alleged responsibility in the mass kidnapping of civilians after authorities refused the virtually blind Santrich access to equipment that would allow him to read while in jail.

President Ivan Duque, whose government was accused of “inciting violence against the demobilized FARC” last week insisted Santrich was a “mafioso” and that Santrich’s inclusion in the FARC’s House faction was an “disgrace.”

Dozens of far-right supporters of the unpopular president staged protests over the weekend against the courts.